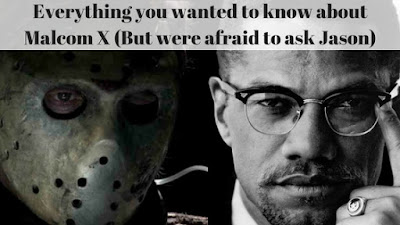 The motive for Jason Vorhee’s murder spree seems obvious at first. A kid goes camping and while unsupervised drowns. The child’s mother seeks revenge and kills campers one by one. Striking back, the final girl beheads Jason’s mother. Unbeknownst to everyone, Jason or the disembodied spirit of Jason watched as his mother was beheaded.

Revenge is the motive for the first several films in the Friday the 13th franchise. A very personal vengeance, based on a savage need for recuperations. To balance the scales with camp counselor heads.

In the fourth film, Tommy Jarvis becomes the target of Jason’s fury. Killing Jason, Tommy is left psychologically damage and checks into an inpatient treatment facility for delinquent children.

Jason comes back. Killing and stabling and eviscerating. On the hunt for Tommy. Several films later Tommy finally subdues Jason by chaining him to the bottom of the lake.

What happens next is a series of films that detach themselves from Jason's original motive. Where Jason sought revenge, he is reborn as a worm. Stalking and killing everything that crosses his path.

At the end of the series, Jason has all the rational of a zombie looking for brains. Distanced by decades, and later by space travel, Jason becomes a psychopath. Lost to the whims of his machete.

What happened here? Part of me would like to argue Jason’s desire to kill for revenge and killing to kill has a lot to do with the profit motive. To keep the franchise moving, the filmmakers avoided overlapping inconsistencies by simplifying the narrative to its most essential elements. The kills.

On the other hand, Jason has grown up isolated. Surviving several decades. Camp crystal lake has been burnt down and replaced with summer homes. The camp that once was such a great point of anger is no longer. And Jason has learned only one marketable trade.

Like Leatherface, fired from the slaughterhouse. Jason continues to do the only thing he knows how to do.

Reduced to momentum. The later Jason is almost a return to form. To the shape. The force of nature made popular by Michael Meyers. There is a sense in which, Jason comes full circle in Jason X. 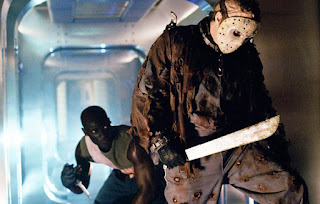 Purified by time and space. Jason finds transcendence. Killing beyond revenge. Beyond any thought of his mother or her fate. Jason kills for duty. He kills for purity. It’s almost as if Jason has come to the anti-natalist conclusion that singling out camp counselors is not a full enough revenge. The world continues to create and produce generations of the types of people that let Jason drown in the first place.

In this sense, the continued generations of counselors, repeating the patterns of negligence and apathy, only reinforced that those who Jason have killed do not complete his revenge. The conclusion that must be drawn is that everyone must die. Total universal genocide of the human race is the only path forward.

This path Jason takes realizes the lesson of Malcolm X. It is not the individual that reproduces oppression, but systems of power. And the only way to cause these systems of power to stop is to chop them off at the balls.
Friday The 13th horror philosophy Jason in Space Jason X Killing Malcolm X Motive power Revenge