Halloween II (1981) or The Shape, The Mask and The Pumpkin

Neighber: We have been trick or treated to death!

Dr. Loomis: You do not even know what death is! 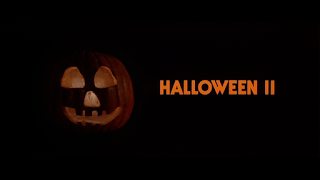 Death is the end. The transformation between existence and nonevidence as the steak knife slides across the throat. Loomis is aware of the cold brutality of the knife. The annoyed suburbanite on the other hand, casually comparing handing out free candy on Halloween to death is out of touch with life.

This juxtaposition is between surface and content, Psychiatrist and suburbanite emerge in the opening credits of Halloween 2. The pumpkin that slowly reveals its innards are more that pumpkin guts. A skull with empty eyes and a transfixed gaze. Hollow holes staring without eyes. Beyond the camera and into the viewer. Am I the target, dying continuously?

Michael Meyers is this shape. A shadow with a form. A surface. Professing content and lacking existence. Just a man with a knife tracing a path through the suburbs. Body by body.

What appears to be a pattern, the trail of blood defies integration. The kills are without map. A course charter over water without a compass. The direction is death and the knife points the way.


A detail is revealed. Laurie is Michael's sister. The shape becomes a pathology. Rationale forms. Michael has an agenda. A rhyme to wrap the noose around his body count.
What is the motive? Does Michael plan to reunite with his sister or stake her to the wall like an insect? Is he providing her a service? Using sequenced traumas to tenderize her mind? Making her ready to receive his shape?

Michael gives us few hints to his behavior. His persistent pursuit of people to stab, and the grunts when he fights back to provide us with little information. We know he wants to kill. To stab, drown and eviscerate. To push forward through the skin. And his compass points towards Laurie Strode.

A sister only recently aware of her lineage. Shocked and broken by her brother’s relentless attention makes an unwilling receptacle for Michaels message. She squirms for safety at every corner. Yet Michael pursues. Beyond rationale and despite resistance.

One is lead to wonder. What would happen if Michael was provided with the opportunity to complete his circuit? Would he kill Laurie? Would he befriend her? What desire would be fulfilled? And from Laurie’s perspective. What role would she be willing to take? And what would convince her to be martyr, savior or a combination of the two? 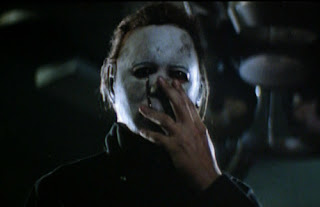 The snapping point. The point of becoming postal. Is an unnamed straw. The moment which is one too many. Pushing the victim to emerge from the submissive womb. Butchers knife in hand. Eyes honed in on a target.

Maybe the motive is buried. Submerged between layers of trauma, jumbled thoughts, and memory lapses. Untranslatability between the ego and the ID puts the machete squarely in the hands of the superego. Always with a plan. Always playing by the rules. Pushing forward transcending expectations and social contracts.

Murder is the pitch the will tunes is duty against. The groundwork for the transformation was already present. The potentially to break from the typical. The daily self. The small child on Halloween. Left to his own devices. Picks up a knife.
Something changes and nothing changes. The behavior behind the mask was prefigured. Always-already possible. Anyone is capable of going postal. But Michael’s will to act isn’t a will in the typical sense. A weighing of the pros and cons. Are these shoes worth the price of purchase? If I become a circus clown will I be happy?

The “if” is what is lacking. The factoring or consequence. The empathy with the future is no present in the desire to obliterate for oblivion’s sake. Michael’s action is an unfiltered force of existence manufacturing non-existence.

But Laurie does not fit in. She is the goal, yet unobtainable. Because if she is impaled or transformed. Michael’s unconscious drive become conscious and Michael would not be able to survive traveling beyond his fantasy.
halloween Halloween II horror laurie strode Mask Michael Myers Philosophy Pumpkins Skulls trauma