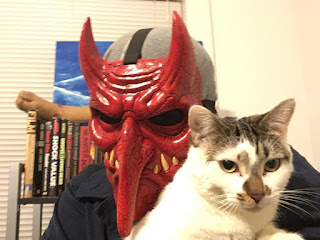 You may have noticed a surprising amount of kitty over the last couple months. In 2016, in the middle of hellish personal crisis, and an episode of PTSD I sprung a little critter from the shelter. I named her Cthulhu. She has been a blast and has helped chill my brain out during some difficult times. I am seeking support in purchasing a spiffy video camera. Video content creation has been a blast and one of the best ways I have found to treat my mental health. There is nothing else in my day that makes me smile more than Cthulhu.

You may or may not be aware that I am a Navy Veteran. I served in the military from 2003 to 2007 and the military put me in some difficult situations. And these events are still with me. I rattle with nightmares. I have sudden mood shifts and sink into depressive episodes. I have been in and out of therapy for almost ten years.

After leaving the Navy, I found peace in reading philosophy. I'd show up six hours early to college to read. Camping out in a chair in the library I journey through the writings of the greatest minds of humanity. Philosophy became my best friend.

After I graduated with my Masters of Social Worker in 2015,  I started Interrogating Ideology with a Chainsaw. Initially, blogging born of a desire not just to read philosophy but to live philosophy, and to be a philosopher one must write.

Mental health is a tricky beast. I had no clue how much the military fucked me up. Unknown to most, PTSD has a tendency to manifest symptoms several years or longer after the event. Midway through college, I had my first crisis. I had a week, morning till evening, where I was ravaged with a pain I didn't understand or find words to describe. After being fired from my first job after the military, I had my second crisis and voluntarily check myself in a mental health hospital.

During the last half of 2016, I had my third crisis. My mood and personality shifted. I felt like shit 24/7 August through December. I started new therapy, upped my medications, and almost moved across the country. I felt like I was spiritually dying. In December I took 2 weeks off from work to play video games and chill out. I also started writing again and added a new feature to my blog Cthulhu!

I'd like to think my battle is over, but I will probably be struggling with my brain the rest of my life.

I am poor Social Worker who creates content for this blog on weekends and when I can't sleep during the week. I'd like to step up my YouTubing content, but I need your help in purchasing a new video camera. My iPhone isn't allowing me to provide you with the quality kitty you deserve.

Cthulhu has been a huge boost to my mental health and creating adorable videos with her is a blast and has helped me cope with several tragedies that took place in 2016 that send me into a severe depressive / PTSD episode. My mental health journey is not over, and I want to be more intentional about using this blog to help me chill out my brain, and ride myself of the darkness rattling around in my skull.

Your contribution will help continue me keep my brain together, publish quality kitty content, and overthrow capitalism.

This is the video camera and gear I plan on purchasing:
http://tinyurl.com/SpiffyCameraForCatVideos

My current video recording device is an iPhone. I am rigging it to a tripod using a selfie-stick holder. I would greatly appreciate your help getting out of the youtube gutter and into spiffy kitty land.