Final Destination (2000-2011) And Columbine: Uses and Abuses of Perspective

What conjures a greater fear? Random violence or deliberate violence? How do we survive? Why would we cling to fabrications when reality spins a different tale?  On the one hand, randomness breaks the pattern of our everyday experience with something that doesn’t quite fit the puzzle. On the other, the rational slaughter can leave us with a gnawing sense of human divergence. The film Final Destination uses rational and irrational violence to disturb the viewer's sense of equilibrium by shifting between reality and a reality invested with death. Similarly, the events of the Columbine Massacre viewed through the lenses of our TV sets intentionally and unintentionally scattered reality forcing the viewer to take sides. How do we make sense of what doesn’t make sense? How do we chart a course through tragedy when competing realities disintegrate our ability to clarify our perspective? This essay seeks to explore how we put the puzzle together when realities compete for truth.

What is violence? Like most words, shoved with so much content, violence there is a simple and nuanced existence. Everyday use of violence is a force which changes an evidential pattern. The teddy bear hanging out on my desk was flowing with time until I hacked its arms off. The hacking changed the form of the teddy bear from whole to parts, yet the bear even in its dismemberment is still recognizable as something that once was wholly bear.

Like the teddy bear, the set of characters unified by the non-event are flowing in a pattern of existence pre-cataclysmic. Just existing as if the whole is the way it had been before the disaster. The vision not readily accepted by the co-star’s hints at existence that could have been.

After being informed, most characters return to their life universes as if nothing changed. In Final Destination 2, a biker and lottery winner returns home with expensive purchases. The viewer, like the protagonist with the vision, are in the know. The seemly self-same existence has death rummaging beneath the surface. Shifting and coordinating reality along a new mousetrap like design.

The variables are aligned. A fire starts. A hand is stuck in a garbage disposal. Spaghetti is tossed from a window. A box falls. A window slides close. A trap of many parts assembles from the everyday objects.

The everydayness of the Final Destination kills is the films lever. A dentist visit, walking to work, the car wash, the drive through embezzled with transcendental exhibitional sadism. The viewer is caught in a transference overlapping the everyday with the fictional universe where every item when coordinate becomes a death trap. 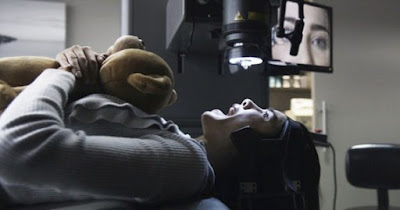 The Final Destination kills live between two worlds. Randomness and deliberateness. The malfunction of a forklift overlappingly appears random yet reminds us of the death design. The deliberate catastrophe. How easy would it be two be trapped on a side of this binary? Every sound, every trip could become infused with deliberateness. How exactly are we able to distinguish between death design and chaos?

Final Destination’s narrative gives meaning to tragedy. A fatalistic meaning. We are all going to die, and if we do not die at the right time, then our time will be orchestrated. Real world events, like fictional events, can use the same dynamic.

On April 2003, Eric Harris and Dylan Klebold acted out a plot a year in the making. The shooting was the highest viewed televised event at the time. Viewers, parents, students and world at large watched the tragedy through the eyes of reporters.

Reporters who cling to ever piece of information, truth, and fabrication, and televised it to the world. We were given a conception of two kids who had been picked on who snapped under pressure and sought revenge. Leaders of a trench coat mafia. Gang affiliation. Mental illness.

The reality was different. Eric and Dylan picked on others. Eric knew how to read others and front as the likable child. The two wanted to see the world burn. While mental illness was a factor the methodical ness of their plan, and the rational used to justify killing was intentional and not a bi-product of a distorted mental landscape. Eric by all accounts was a psychopath, devoid of empathy and with a pension for manipulation. Dylan was clinical depressed, suicidal and overwhelmed by self-hate and alienation.

The viewer in each case was given a narrative. Death’s plan must be complete and two kids drove insane. But the traumatic narrative never reveals all. Elements of the narrative are always left to be revealed, reordered and rendered incomprehensible.

Trauma and tragedy leave us with a difficulty to integrate the narrative. We create stories on the fly out of necessity to survive that become maladaptive, outdated or fetishized. What worked to help us narrate seal the inconsistences and narrative holes.

The protagonists are convinced, that their understanding while wild and tangential is the truth of their situation. Yet, the elevator passengers lacking context are unable to make sense of the protagonist’s explanation.

There is a sense in which context is a kind of truth. A perception of the schematic map of the narrative. The constellation of meaning providing the story with sense.

Is context a kind of truth or is context a creation? A perspective shaped by our position in relation to an event? Mapping and remapping itself based on our perspective and relationship to descriptors?

Final Destination and the Columbine share, with most publicly viewed tragedies competing realities and perspectives shaped those realities. The Truth then becomes a matter of power in numbers. Believers buying into the same narrative.

Idea selling and buying serve political goals as well as survival goals. Shape the actions of the group by controlling the contexts in which viewers and characters create their perspectives. Survival depends on sanity, or at the very least a state of mind which allows an agent or group of agents to act on behalf of their desire for continued existence.

Consider the likable lie that rose out of Columbine’s desire digest reality not yet made palatable. The girl who when confronted with a gun is asked a question, “Do you believe in god?” and her quick response “Yes.”

The religious community ran with this She said yes story. Redoubling efforts even after the news was released that this girl never said what was claimed.

The She Said Yes story fits the pre-existing ideology of the townsfolk. The god-fearing machine, ready and willing, to generate the transcendental out of a piece of toast. Why wouldn’t the church cling to the likable lie? The lie which reinforces the base emotional makeup of the believer? The narrative supported the community’s ability to refabricate their soul after trauma shattered the intrinsic good.

Death’s plan is a harder sell. One must experience the plan in action, often multiple times, in order buy into the idea that cosmic forces are out to fuck you up.

Consider the token black man in Final Destination 2. Denying the possibility of deaths plan, clinging to self-determination of fate, until gravity swings a canoe at his face. The forces confrontation with death’s plan was a necessity for the character to submit to the idea of deaths plan.

The film Final Destination uses rational and irrational violence to disturb the viewer's sense of equilibrium by shifting between reality and a reality invested with death. Similarly, the events of the Columbine Massacre viewed through the lenses of our TV sets intentionally and un-intentionally scattered reality forcing the viewer to take sides. How do we make sense of what doesn’t make sense? How do we chart a course through tragedy when competing realities disintegrate our ability to clarify our perspective?
Columbine Final Destination horror horror philosophy Massacre Narrative School Shooting trauma violence