It's 3:28 am. I woke from a nightmare and dehydration. I rarely remember my dream. Often times, when I do I went to bed at an appropriate time and did not go to sleep out of exhaustion. Last night I finished a bottle of wine and went to sleep four hours early than usual.

I have felt this sense of dread for the last couple days. The weight of existence. What good are we as a species? What merit do we bring to this earth?

The nightmare was about work. I arrived at the office with my typical attitude of hoping for the best and expecting the worst. Upon unlocking the door to my office I found that the room had been stripped. All my posters and photos had been removed from the walk and piled on the floor. Inspecting the walls I found they had a new coat of paint that had been poorly applied. There were inconsistencies in the coat of paint. Missing spots, and it was if rather than going up and down with a paint roller each time the paint was applied with a different angle.

Painting is something I know very well. Painting was the task, during the Navy, that occupied more time than any other. Ships are metal floating in salt water. And salt water is the worst for metal. Painting is what keeps the ship from deteriorating prematurely. So, to prevent this sailors chip, prime and paint the rusted bubbles that develop under coats of haze gray. 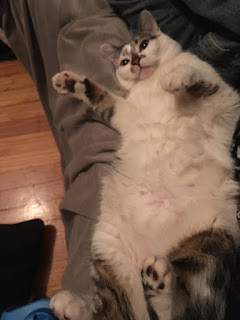 I turned around and tried to find an alternate route. Further, into the office, I found a newly built hallway with adjourning rooms. The first room I stopped in was whitewashed and had a mattress on the floor. What the Fuck? I turned around to return to my search. I found a coworker in an adjourning room. He began lecturing me. I should be happy with what I have today because it could be worse.

I woke up at this point. Mouth dry, sweating and noticing my heart beating. I wandered to the fridge and guzzled some apple juice. Cthulhu followed. Meowing eagerly. She followed me back to my couch.

As I began, writing this post she paced around my stomach and plopped on my lap. I am writing in the dark. Weary of life. Dreading my return to work over the weekend and fantasizing about moving city near the mountains. I want to work free of stress, lies, and inconsistencies. I want to be happy and left alone to get the work done.

Dreams like this worry me. They remind of the reoccurring dreams I have about the Navy. The feelings of being trapped. Waking up from a nightmare with this feeling that while I may have physically left the military part of my brain is on a ship in the middle of the ocean. Full of stress and hate. Trying to stay alive and dying inside.

I'm happy Cthulhu is here. I don' know if here little monster brain is aware of my suffering, but she makes me feel like she understands. Which is not something I can say for most humanity. Sometimes I wish everyone would disappear. All my responsibilities would turned to mist. And it would be just me and Cthulhu and a pile of horror movies until the end of my time. 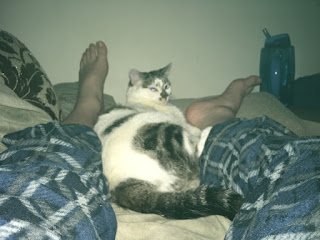