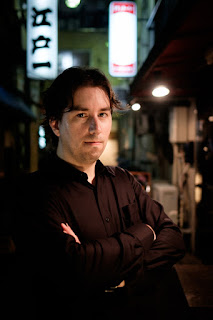 Tell me about yourself? Why do you write?

I'm a horror writer who was born in Bulgaria, grew up in the UK, lived in Japan for 11 years, and recently moved to Northern California. So I've been around!

I've been reading horror stories since I was a teenager, and I've always been drawn to stories from the perspective of monsters. I love to get inside a character's head, and see even the worst person in a sympathetic way. I also love the diversity in fiction, and reading and writing about characters who are very different to myself, a straight white man!

My love of travel and exploring different cultures gives my stories a powerful sense of place, and that's usually where my ideas come from. "Rachel", for example, was all about conveying what it was like to be a foreigner living in Tokyo, and to get across my love of the city and country.

What attracted you to Horror? What keeps you coming back?

This is a slightly difficult question to answer, because horror works on me extremely well. I get easily, to the extent that I sometimes have trouble making it through certain films and books. I'm someone who doesn't believe in ghosts, for instance, but show me a good ghost story and I'll be terrified and unable to sleep!

I think that's one of the reasons I'm drawn to horror, because that fear really affects me. There's something powerful about exploring our fears, and fighting through repulsion and terror, and seeing what makes us tick. I hope my writing accomplishes that, making readers afraid to turn the page or read the next paragraph.

What’s the process like? What inspired you to write Rachel?

The seed of what became "Rachel" came to me when I was briefly living in Thailand, and then I switched the story to Japan when I moved there. I've always loved vampire stories, especially the more gruesome ones that explore the idea of vampirism as a curse that consumes its victims' lives. I wanted to write my ideal version of a vampire story. Rachel struggles constantly against her blood-lust, and it's something that affects her on a nightly basis, hurting her and people around her.

At the same time, I was interested in writing a story about me, living in a foreign country, being an outsider. It's a state that can be disorienting, but can also give you a weird sense of freedom. The idea of a vampire from England, living in Japan, understanding some of the culture, but not all of it, stuck in my mind for years before I finally sat down and wrote it.

I'm a messy writer, and not much of a planner. So I usually sit down and write without much organization, then try to refine it in further drafts. Around the third draft is when I really feel I have a sense of the characters and themes, and then it starts to come together.

Apart from the setting, Rachel herself was the core of the book. In a way, she's an exaggerated version of myself, with a lot of my insecurities and anxieties. Her character was what kept me writing during times when it was tough. It didn't take long for her to feel like a real person, and then writing her became easy.

Rachel is an awful person in a lot of ways, and she does a lot of damage, but it was impossible for me not to feel sympathy for her. One of my goals with the book was to get that across to the reader, so as much as they'd be repulsed by the things she does, they'd also want her to succeed and find some measure of happiness. Judging by reactions to the book, I think I succeeded in that aspect, which makes me happy!

What about writing makes you feel ?

From a young age, I've always loved writing and creating worlds and characters that feel real. I think that's immensely powerful, and something that good fiction does so well.

One thing I wanted to do with "Rachel" was Japan in the way that I saw it, to get away from the cliches and stereotypes that are prevalent. People who've read the book have commented on how real it feels, like they traveled to the locations with Rachel and can imagine walking through those dark Tokyo streets. Being able to transport a reader to a location that feels real, with the sights and sounds and smells, is what keeps me writing. That sense of place is so important to me, as much as the characters and .

Is your novel  scary? What was it like creating the scary parts?

I hope it's scary! It certainly scared me when I was writing it, and there are certain characters in there that are particularly gruesome.

As much as scary stories affect me, I love actually creating them. Sitting down late at night, focusing on the computer screen, trying to conjure images and settings that make the hairs on the back of my neck stand up... were a few times during the writing of Rachel when my wife made me jump by interrupting me! I'm the kind of person who loves having nightmares, even when I wake up screaming, and I spend most of my time conjuring disturbing images and situations and how to get them across in prose.

Beyond the scary parts, though, "Rachel" is a story about someone who loves blood, whose whole is consumed obtaining and drinking it. I must admit, one of the book was to gross people out! I'm not a fan of the more sanitized versions of vampires we often see; I feel if you were to accompany a vampire during their nightly rituals, you'd be terrified and disgusted in equal measure.

Is horror more likely to appeal to male readers? Why? Is horror an anti-feminist?

I don't think horror appeals to men more than women. Most of the women I know love horror (and violent video games, for that matter!) Women have written and consumed horror for centuries, so I definitely disagree with the idea that the genre is more likely to appeal to male readers.

One of the reasons I made my main character a woman (and a gay one, at that) was to have her be the one committing violent actions, though Rachel's victims are both men and women. Most vampires, and other monsters in fiction, seem to be men, which I find boring and reductive. I think there are a lot of people out there who want to see women doing awful things in , as well as being heroes and kicking ass!

I think there is an anti-feminist element in horror, as in every genre, and women are usually portrayed as victims. That's something I'd like to see change, though I think ultimately it will be improved by publishing more stories by women (as well as writers of color, and LGBT writers). Publishers like Fireside Fiction (and Evil Girlfriend Media, who published "Rachel") are taking really important steps to diversify their writing, so I hope that increases. I try to read and draw attention to books not written by people like me as much as I can, and I'd encourage everyone to really think about the fiction and entertainment they consume.

I think there's another aspect horror, though, which is that it's a genre that takes women's fears seriously. It's always a bad idea to enter that dark alley, that guy who seems too perfect is definitely a serial killer, etc. In a world where women and minority groups are frequently in danger, I think there's value to that contains these fears. That's not really something I feel qualified to talk about, but I think painting horror as inherently sexist is missing a lot of nuance.

So please read "Rachel"! But then go read horror and urban fantasy by gay writers, transgender writers, writers of color, disabled writers. Not simply to diversify your tastes, but also because there are a lot of amazing writers out there whose work is ignored or marginalized.

Is there anything you would like to tell our readers?

You can buy Rachel on Amazon at / so go do that if you want a violent story about vampires that don't sparkle. It's published by Evil Girlfriend Media, who some amazing things in speculative fiction, and you should totally check out their other books and short fiction.

I also want to give a shout-out to Dean Samed, who was my cover artist. He did an amazing job, and I think the cover sells the book by itself!

Where can readers go to find out more about your writing? (Please include social media links) *
www.dobharrison.com is my main website, and I'm also active on Twitter @dobharrison if you want to follow me on there.
Chainsaw Exorcism Dobromir Harrison Ghosts horror Rachel Vampires Writing