Philosophizing The Walking Dead S3E13 Arrow On The Doorpost Or How do Survivor Groups Go To War? 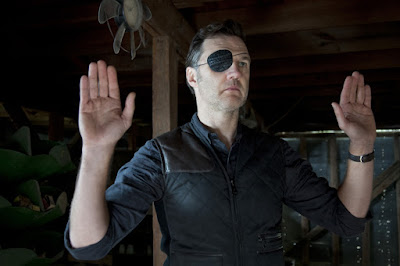 Welcome to our journey into the guts of The Walking Dead. What kind of journey? A philosophical, psychoanalytical and political kind. What I would like to do over the next couple months is dig through the Walking Dead episode by episode to see what it can teach us. Thank you for following me on this journey. I look forward to reading your comments. Be forewarned: There are spoilers everywhere. Don’t forget to check out my previous post in the Philosophizing TWD series: Philosophizing The Walking Dead S3E12 Clear and Unpresent Danger

In Arrow on the Doorpost, Rick and the governor meet to discuss terms for peace. Until this episode, the Ricktatorship and the town of Woodbury had not formally recognized each other as equal political entities. As viewers, we get a large perspective of the organizational structure of the two survivor groups. Both share similar qualities; autocratic governance, leadership willing go against popular, and minimal midlevel leadership.

Survivor groups need management. Divergent goals and morals leave groups susceptible to decision impatience and in fighting. The inability to make timely decisions can corrupt the group's ability to hold their own. For example, early in Season one, Rick decides to rescue Meryl from the city. Rick received flak from Shane because he was valuing the needs of the group over the needs of the family. Other members urged Rick to abandon Meryl to his fate. Rick was able to cut through the bickering and indecision and move the group into action by making the case that if they were not able to save even the worse of society they would lose their moral compass. On the other hand, when member decide that their goal for the group is more valuable than others in-fighting is likely.

Maintaining group consistency and moving group decision making into action require a minimal of organizational structure. A leader needs to step up to clarify the group's vision and mitigate conflict among members. In the case of the Ricktocracy and Woodbury, both groups opted for an autocratic cult of personality. Akin to Stalinism, Rick, and the Gov are elevated, not just out of utility, but out of a need for a godlike king to reign over and validate the direction of the group. The kingship is most evident when members of the survivor group are challenged about Rick’s qualities as a leader. Not only does Daryl argue out of evidence related to Rick’s ability to keep the group alive they speak with the loyalty of a true believer.

Rick and the Gov were never voted into leadership. Both stepped up when the survivor group was bogged down by maladaptive organizational styles. Initially weary about Rick’s ability to command, the group was won over by his fortitude and ability to keep the group alive. There is a sense in which, Rick is more like a Riddick at the end of Chronicles of Riddick. Killing the highest leader in the kingdom installs Rick as the dictator. 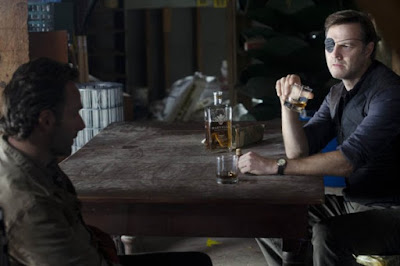 But is Rick or The Gov, qualified to speak on behalf of their respective groups? While there are some serious problems with the Ricktactorship, Rick consistently informs the group about decisions but has the tendency to foreclose democratic decision making in order to promote his own choice. The Gov on the other hand only discloses information on a need to know basis. Largely keeping the majority in the dark about the Gov’s political endeavors. What do you think? Is Rick qualified to speak on behalf of his people?