Philosophizing The Walking Dead S3E15 This Sorrowful Life | Who Is Morally Superior - Rick Or Merle? 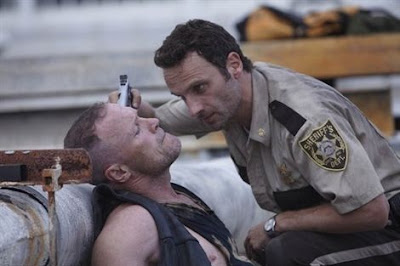 Welcome to our journey into the guts of The Walking Dead. What kind of journey? A philosophical, psychoanalytical and political kind. What I would like to do over the next couple months is dig through the Walking Dead episode by episode to see what it can teach us. Thank you for following me on this journey. I look forward to reading your comments. Be forewarned: There are spoilers everywhere. Don’t forget to check out my previous post in the Philosophizing TWD series: Philosophizing TWD S3E14 Prey Or Suffer Not A Liberal To Live

Merle shares many traits with my favorite character from Game of Thrones. The Hound. Merle and The Hound are wild cards. They are characters freed from social contracts and internal consistency. This freedom allows Merle l a wider ethical berth than most of the characters on the show. Rick, unlike Merle, is trapped in his need to maintain moral consistency in his sense of self and political persona. While Merle’s freedom allows him to do great evil, he is also free to reach ethical good’s inaccessible to characters like Rick who are trapped in pathological need for consistency.

While Rick has grown since waking up in the hospital, he is still a doubter. A man anguished by the burden of responsibility and the pressure to make the best of all possible decisions. In This Sorrowful life, Rick schemes with Daryl, Hershel, and Merle to trade Michonne to the Governor. Rick appears confident in the plan until talking to Merle. Merle knows better and reminds Rick that he is too good of a guy to take on a mission that lacks moral clarity. Merle, on the other hand, is the kind of person to take a mission and maintain a sense of duty. The difference between Rick and Merle is that Merle has the ability to attach and detach from survivor groups at will. Free from the obligations of leadership and social contracts Merle is outside of moral responsibility. Rick on the other hand, bears the crown of the dictator and needs to verify the utility and consensus of a decision.

More than a mystery, Merle is a surprise. Just when the viewer is worried Merle will deliver Michonne into the torturous hands of the Governor he frees Michonne and launches a suicide mission against the town of Woodbury. Lacking acceptance and grounding in a survivor group Merle has the freedom to think beyond the needs of either group and is able to identify what is in his best interests. More than anything Merle is a big brother and his highest interest Daryl’s safety. A safety that is challenged by his very existence and Rick’s inability to make the tough call. Merle's only option then is to eliminate the biggest threat to his brother’s safety.

Before the end of This Sorrowful life Rick and Meryl change their minds about delivering Michonne to the Governor, but for different reasons. As Rick mentions in the final moments of the episode he is scared of his own power.


Rick Grimes: What I said last year, that first night after the farm... it can't be like that. It can't. What we do, what we're willing to do, who we are - it's not my call. It can't be. I couldn't sacrifice one of us for the greater good because... because we *are* the greater good. *We're* the reason we're still here, not me. This is life and death. How you live, how you die - it isn't up to me. I'm not your governor. We choose to go. We choose to stay. We stick together.

Merle, on the other hand, is undisturbed by his ability to act on and against the wills of others. Why is this? When Rick is recruiting Merle earlier in the episode, Rick asks, “Do you even know why you do the things you do? To which Merle responds:


Merle Dixon: I don't know the reasons for the things that I do. Never did. I'm a damn mystery to me.

Existentially Merle’s sense of personal mystery is what gives Merle an ethical advantage over Rick. Rick is a person who feels he knows himself in spite of the absurdity of life. Especially after zombie apocalypse the meaning of life is slippery. Even before the apocalypse, Rick struggled to grasp on to this identity. By never living up to his own expectations as a husband, father or policeman his sense of self was constantly adrift. Merle on the other hand never attempted to claim a sense of self. His identity was provisional and changed to suit the needs of survival.

Would Rick have the fortitude to saw off his own hand? Based on his difficulties with identity he would not have been able to develop enough agency to take action. Ironically, Rick’s struggle for identity is exactly what forecloses his ability to know himself. There is a sense in which Merle’s commitment to personal mystery frees his mind up to be himself in a way that inaccessible to Rick. And it is this mindfulness of his own negation that gives Merle the freedom to act while Rick percolates. 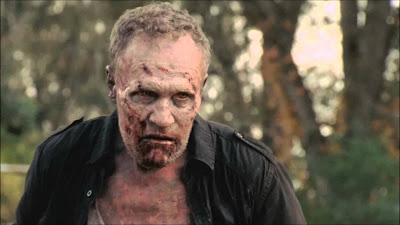