All Things Interrogated - Is Post-Horror a real thing? And the Tyranny of Choice 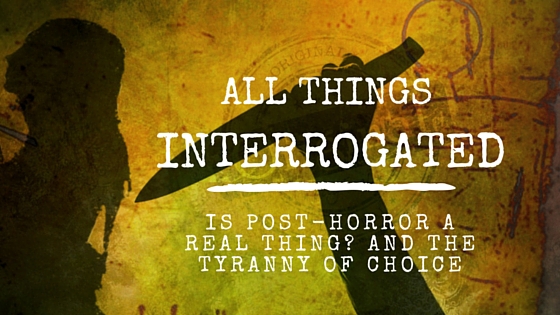 Tonight I arrived home from work and sat in front of my Blu-ray and DVD tower. I Scanned the horror movies collected over the last decade. So many choices! A paralyzing amount of choices. Werewolves or Zombies? Vampires or Monsters? Slashers or Exorcisms? And you know what I was caught with a sense of dread. What do I do?

A year ago, I reorganized my films by sub-genre. The top row is slasher films, followed by zombies, aliens, monsters, supernatural, and ending with human monsters. This system made find a movie easier, but the system still did not unknot two problems in my brain. An uncanny sense that there is a film I have somewhere that is exactly the movie that I want to watch today, and the inability to find this bastard.


I’m curious where this dread originates? Unlike most movie watchers, I’m watching with an intent. I’m hoping to write about film. Anticipation adds a sense of obligation. But the pressure I put on myself is not a fully exhaustive explanation. There is more to it.

A large part of me wants to blame capitalism and the absurd abundance of choice. But the anarchy in the market and the unnecessary selection of 10 brands of ketchup at the grocery store is a different dilemma. Many horror films recycle the same tropes. A half-naked girl chased by a masked man with a blowtorch. A ghost in the attic with an overwhelming desire to implode the nuclear family. Many horror films still have a uniqueness.

The horror film you choose is the experience you will visit. Visceral reciprocity. How many times have you cringed when a bone breaks and juts through the skin? A fingernail snaps as an obnoxious college kid is dragged across a wood floor? The feeling is transference. A magical connection to something in the world where we take on a feeling. A direct line is opened between the film and your emotions. There is a sense in which, for the slightest of moments our bodies do not know that this violence isn’t real.

Horror is always changing. Shifting tones to meet the fears of differing generations. Remakes are a great way to mark these tone shifts in society. Notice the differences in the Texas Chainsaw films. 1970’s was a very different landscape to release a film. The Vietnam war was wrapping up, the feminists’ waves raged and society confronted the first televised (in color war) – Vietnam.

Texas Chainsaw massacre is a film which fit the violence and liberation bubbling at the surface of the 1970 subconscious. And in kind, the remakes can also provide us insights about the times they were made. Consider the first remake in 2003. The film, a near clone, echoed the torture, grittiness and moral confusion of the 9/11 landscape and Bush’s War on Terror. Intense and ready to wrap family values around its chainsaw the film told a great allegory. The family, like the United States, was ready to do anything to protect itself even embracing torture. But, the family did not just embrace torture in a utilitarian way. Much like the United States, the Family enjoyed torture for torture's sake.

The oddball of the bunch for me is Texas Chainsaw 3D and no matter how much I feel like I should hate the film I find something redeemable in fully committing to the anti-hero.

Not only is Texas Chainsaw 3D a lazy cash grab the film is an example of post-horror. A blended mishmash. A horror lacking character and spirit. A film that disregards rules and makes new rules. Defying them as they are made. Lacking consistency or a sense of identity the film becomes a husk of a grander narrative. Could the ending, Leather face becoming a basement pet, foreshadowed anywhere in the Texas Chainsaw Massacre cannon? No, and nor should we hold the film to the standards of the Texas Chainsaw lineage because the only thing that identifies the film to the series is the film's name.

Part of me thinks that what I am looking for is the feelings and tensions I felt watching Psycho, Martyrs or Texas Chainsaw for the first time. I believe is undeniable that emotional experience between the first Texas Chainsaw and the last film are radically different experiences. Why is this the case? Have we lost our fear of what goes bump in the world? On the other hand, I appreciate experimentation, even if I am left with a tame vision of horror that is not meeting the emotional quota set by great horror films. I know running across a truly creepy movie is rare. But there must a great film out there waiting for me!