All Things Interrogated: Frozen 2: I kissed A Girl And I Liked It 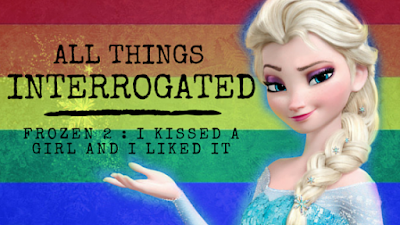 When you were watching Frozen did you get the feeling the film was as progressive as it seemed? You are not the only one. Self-proclaimed writer/activist/student and internet personality Alexis Isabel agrees. Which is why she launched the hashtag, #giveelsaagirlfriend. With the slogan, she hopes to leverage the internet and convince Disney to bring Elsa out of the closet. Responding to the controversy liberals and conservatives began slinging mud. On the left, well-meaning liberals are championing outing Elsa's sexual orientation as a step forward for the LGBT community.


On the right, reactionary conservatives are chanting the worn out slogans of family values and political correctness. Reality is getting lost in the debate. Is there really evidence in Frozen that supports Elsa's attraction to women? What exactly is politically correct about Elsa coming out of the closet? Would forcing Elsa out of the closet using popular consensus really help the LGBT community. Are we asking the right questions? Only with a re-articulation of the controversy, one which cuts through the misguided polemics will we begin to address the problems of Elsa and Disney's portrayal of princesses.

Elsa, like many Disney princesses, has an identity problem. She see's the disconnect between how she see's herself and what the world expects of her. As a woman, and a princess much is expected of her. Midevil culture expects a woman to be passive, tame and docile. Monarchism and the kingdom expect autocratic and direct leadership. Elsa has power, a magic ability to materialize and control ice. The power terrifies her. At a young age while playing with her powers she inadvertently hurt her sister. But Elsa has another power – the bloodline that makes her a princess. Unable to reconcile the powers she is torn between duty and identity. The tension explodes on Coronation Day when Elsa has a hysterical fit. Just as she is to become queen, she loses control freezing and genociding an entire kingdom. Terrified of her own abilities, she runs away from her responsibility and sings a song alone in a Frozen Wilderness.

Let it Go is a song that articulates Elsa's struggle for personal and social acceptance. Elsa's struggle is a common struggle for anyone who has a similar disconnect. Which is why it does not surprise me that the LGBT community has taken the Let It Go as an anthem. But is Elsa's identity struggle a sign that she likes girls? The song gives us no hint to struggle over sexual orientation. And the only evidence in the rest of the film is Elsa's rejection of male suitors. Making the assumption that likes girls because she has not shown evidence of liking boys is fallacious. Just because I hate ice cream does not provide a ground to support the claim "I love cheeseburgers". The two items are mutually exclusive until they can be related with evidence. Nonetheless, liberals have rallied behind the sexual orientation projected upon her. 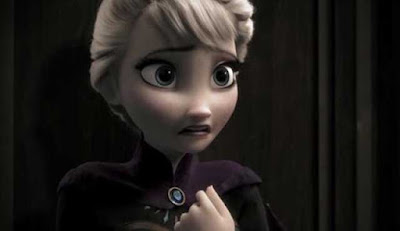 Even if Elsa is truly a lesbian how does Frozen 2: I kissed A Girl and Liked It help the rest of the LGBT community. The struggle boys and girls have with homosexuality, bisexuality and transsexuality and transgender experiences are unique. The lumping together of Lesbians, Gay, Bisexuals, and Transgender/Transsexuals, and assuming that lesbian narrative also provides a narrative for all fails to respect the uniqueness of each group's journey. Each letter of the LGBT is not being accepted by society at the same speed. Of course, some common ground is found different oppressed experiences, but similarity isn't identicalness. Leveling the experiences of each letter in LGBT is akin to saying a movie about Martin Luther King is a story about all minorities. Of course, solidarity is found among minorities, but failing to respect the unique experiences of each minority is the worst form of political correctness.

What is the worst that could happen if Disney gives Elsa a girlfriend? On the one hand, a narrative where Elsa develops a relationship with another woman would be groundbreaking. I cannot think of a single film handling any LGBT story in a light-heartedness and sentimentality. The greatest good in giving Elsa girlfriend would be the opportunity provided to subsequent films created by better story telling companies than Disney. How awesome would a lesbian slasher killer be? On the other hand, children would ingest a historically revised version of reality. The truth of the matter is if Elsa outed herself publicly in the medieval world she would be burnt at the stake. A story where a Disney princess privately struggled, weighted the pros and cons of coming out of the closet, and outed herself all the while handing social rejection with grace would be more useful.

The right, argues that if Elsa gets a girlfriend then Disney would be forcing political themes on children. Statements like this are rabbit holes that deserve rejection without commentary. Addressing the slew of corrupted pre-suppositions are too time-consuming to be relevant so we will be short and direct. I will be brief. Hick's assertion assumes that Disney films aren't already political. The idea that Disney films are outside politics is delusional. Disney is a giant money create raking in bazillions during any given year, though films and merchandise. Additionally, the reach in which the films have, and the power they have to shape the cultural makeup of society is foundational to another presupposition in this statement. If Elsa was given a girlfriend in Frozen 2, the films would have the power to impact children. If Frozen is not political how could a lesbian version of Frozen impact children?

In response to #giveelsaagirlfriend, the right created its own hashtag. #princecharmingforelsa. But is a prince charming really what a princess needs? The slogan ignores the versions of princesses Disney presented us with over the years and a great lesson about betrayal in Frozen. I am referring to the scene when Anna realizes Prince Hans betrayed her. The betrayal forces Anna to most important lesson a Disney princess has ever learned. Lack of emotional intelligence can blind you.

Beyond the calls of the right and left lies a more useful framing of problems at the core of Frozen. Elsa is struggling with some life defining problems, but the issue is not about who she wants to bang – the issue is power. Frozen's inability to create a female lead with a strong identity and capacity to rule a kingdom is a largely ignored failure. A lesbian princess while progressive does not address the powerlessness of the Disney princess. What we need is a badass princess who takes life by the ovaries and doesn't take shit from anyone.