The Aggression Scale (2012) Or Why Do Boys Stab Others While Girls Stab Themselves? 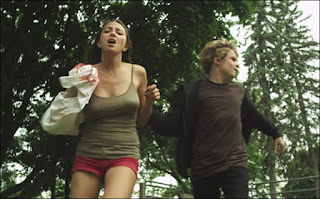 Aggression scale is a film about trauma. Specifically, coping with trauma by using anger. An unjust event shattered Owen and Lauren’s lives. Mobsters are coming to reclaim money stolen by their father and kill the family for the father’s sins. When the mobsters arrive, Lauren in the shower and Owen is already scheming a plan of attack. What the mobsters do not know is that Owen has a diagnosed behavioral problem. Aggression.

The trauma we act out is guided our place in ideological systems. Gender interprets our trauma in terms of weakness and power. Masculinity teaches boys that manliness is defined by tolerant of pain. A boy proves manhood by taking more pain than the next guy. But if a boy flinch’s or is swayed by tragedy his very genitalia is called into question. A girl, on the other hand, is expected to show weakness and avoid showing pain publicly.

Like Jason Voorhees and Michael Meyers, Owen does not speak a word during The Aggression Scale. What does set him apart from traditional slashers is his enjoyment of violence. While the film justifies Owen’s violence as vengeance against home invaders and attacks by bullies this does not tell the whole story.

Lauren, Owen’s stepsister, on the other hand, reacts to trauma differently. The only clue we are given about her history is the scars on her wrists. Some unknown event has rattled its way into her brain. In all likelihood, she was the victim of someone’s whims or dealt a bad hand of genetics. Whatever is the cause of Lauren's tragedy, she directs her aggression inwards. Internalizing the aggressor and re-victimizing herself.

The scene midway through the film where Lauren respectively stabs one of the mobsters is telling. Unlike Owen, who is calm and numbly collected when he traps and hunts the mobsters, Lauren screams while she repetitively stabs the mobster. From her depths, something larger than the violence is bellowing. The opposite of relief. Lauren is crossing a line from victim to something grander.

Returning to Owen, what distinguishes him from other slashers is his enjoyment. Jason Vorhees never smiles out of satisfaction when he accomplishes a spectacularly creative kill he just moves on to the next target. Owen is not obviously gleeful about his violence, but in the last act of the film, Lauren screams at him for using her as bait Own smirks and shrugs. The smirk good peek into Owen's psyche. There is a sense in which he has a pride in his ability to outmaneuver and kill the mobsters. Combined with the shrug Owen demonstrates a glee in which his sister just another toy in the sandbox.

Aggression explodes or implodes. Anger inspires the otherwise dull person to sharpen her ax or spin someone into self-hate. A hate that cuts into the very fabric of identity slicing one's sense of agency. Owen's instinct towards aggression, not only allows him to survive the day but target his anger at another set of bullies thereby helping him continue to process the original violation. Lauren's eventual acceptance of Owen's coping strategy gives her access to the raw core of her sense of freedom. While neither strategy is better than the other, Owen's violence has a utility that unstops and/or redirects the flow of hate that may otherwise be directed towards one's selfFreeded from self-blame the victim is able to transion into agressor.
femininity horror Jason Vorhees Masculinity Michael Myers Slasher The Aggression Scale trauma violence