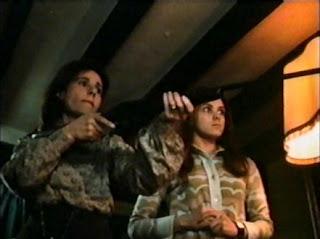 The family is a bizarre institution. Families are where we receive our cultural education, learn to walk, and internalize the rules of the world. At the same time, families are where we receive trauma that leaves us with dysfunctional personality traits and maladaptive behaviors. The family at its core is where we are initiated into the best and the most brutal of what humanity has to offer. The Eastwood family in the film Crucible of Horror is a prime example of the nihilistic potentiality of the family institution.

The film centers around a mother and daughter who kill the oppressive father and are haunted by his corpse until the father rematerializes at the end of the film as if nothing happen. Crucible of Horror highlights the difficulty related a revolutionary act of violence, and the specter of the oppressor haunting the revolutionary who is unable to fully commit to her acts.

Violence can either solidify a family’s unity or break it in half. A heavy fist can cripple the will of a wife or inspire her revolt. But all too often the scales are tipped in favor of powerlessness. A learned helplessness. A body with a shattered spirit.

But what inspires such submission to control? The mother and Daughter’s characters are more action that voice. Their only lines of dialog are responses to the father’s dinnertime badgering. The mother appears broken down, a shell of a person struggling to speak. The daughter is all spit and fire lashing out at the father's insults. Neither character is fleshed out enough in the film to be more two impulsive reactions to violence. The broken spirit and the spirit on fire.

The turning point in the film takes place when the daughter is caught stealing. The father charges to her room and beats her with a switch. The cries ring out in the house and the camera cuts between three scenes; the beating, the mother overhearing the beating, and the son who mockingly waves a stick playing orchestra conductor.

This last frame has a unique violence. The beating itself is straight forward. A father whipping his daughter. A direct physical violence. The conductor son, on the other hand, is the horror of a fascist in training. It’s as if to guarantee that the father's violence will continue to a subsequent generation.

The film presents rational albeit sometimes absurd explanations for the father’s repression. The daughter steals money, and when the father finds out he beats his daughter with a stick. This beating is the turning point in the film. It is just brutal enough to shake loose that shackles holding the mother in submission.

What forces the mother to realize her agency is the externalization of violence. Up to this point, the mother was the primary target for the father's physical and emotional tantrums. When the mother is confronted with the fact that her daughter is beaten a set of the feelings that had been hidden by helplessness and numbness are violently reintegrated in her mind. The father’s violence is no more something just for the mother. A violence that can be compartmentalized and numbed away in the mother’s unconscious.

Finally, awakened the mother tells the daughter that she wants to kill the father. But, something goes horribly wrong. After killing the father, making it look like a suicide, the father's body faithfully returns and fully rematerializes at the end of the film as if nothing happened. What is happening here? The easy answer is poor storytelling, but I think this is a cheap way out of making sense of the film's end. The primary problem is the Mother and Daughter did not uproot the internal oppressor, the father within themselves so that he is compelled to return. Haunting the mother and daughter for their failure to associate with the righteousness of their acts.
Crucible of Horror family Fascism fatherhood Ghosts haunting horror Murder The Corpse Vengeance violence