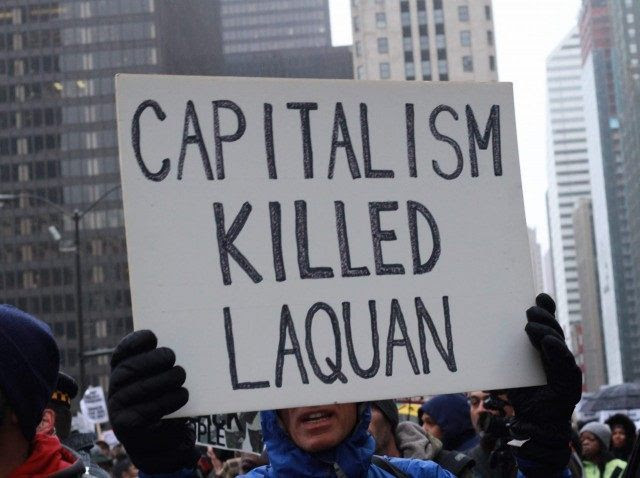 The times are strange. The vampire that is capitalism at the highest point of is bloodthirst. Christmas, you know, that one day that drives the economy for the planet is on its way. On the one hand, the blind obedience of the shopper. On the other, the Black Lives Matter protest taking to the streets in the name of Laquan McDonald seeking justice on the eve of the 2015 shopping season, Black Friday.

I was on the streets for 2015s Black Friday Protests, marching and blocking store front on the Magnificent Mile in downtown Chicago. The protest was a thing of beauty. The protesters came from many factions of Chicago's social movements banded together to shut down stores along the mile. A large contingency surrounded by cops march up and down the street while smaller groups locked arms blocking shoppers from gaining entrance into the stores. If a crew blocking a store front was getting swarmed by cops or needed more people power they would wave or whistle the group marching and some would join the smaller groups. If the problem the whole group would swarm until the site calmed down and then returned to marching and singing on the street.

I was standing in front of the Apple store next to a 14-year old who came alone. He said he just could not stay home while such injustice was happening to his fellow humans. At one point a cop started pushing an older woman who was standing several feet away from me. She raised her hands and started shouting, "Please don't hurt me. My hands are up!" Others joined the chant and pulled out their cell phones to record the cop. Instantly the cop backed off.

A Chicago Tribute article stated that we caused stores to lose between 25% and 50% of sales. That is power.

But, not all protests had this level of coordination or continuity. Not wholly unexpected for a city as politically segregated as Chicago. A protest several weeks ago outside the Chicago Police Headquarters on the south side was an example. The event was initiated and led by a coalition of church groups who lead a rousing prayer session. On the fringe of the crowd, a woman kept screaming, "Jesus!" repetitively. I initially thought she was supporting the protest because shouting "Jesus" isn't all that un-churchlike until she began ranting loudly about how the protest wasn't Jesus enough for her. When the prayer ended a loud and angry man from the Revolutionary Communist Party got on his milk crate and began screaming about how prayer is useless. Of course, prayer is useless, but they RCP only turned out five people that night. Powerlessness is more futile than prayer. After the church folk left, a group of younger, mostly male youth swarmed in on a line of cops to scream and stare them down. At this point, the reporters and cameramen swarmed with a blood lust.

I was disheartened by this event. While all groups were together and on-board for the main body of the protests, the sectarian sniping and the motives of the outlier groups ruin the day. The effectivity of the protests is not measured in the warm and fuzzy feelings in the protesters themselves, but its ability either to organize people or to make actual change. Both measures were undermined, but the divisive yet photogenic bullshit of a few.