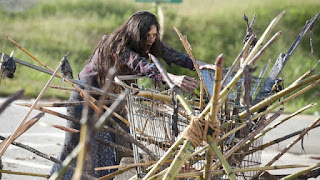 Welcome to our journey into the guts of The Walking Dead. What kind of journey? A philosophical, psychoanalytical and political kind. What I would like to do over the next couple months is dig through the Walking Dead episode by episode to see what it can teach us. Thank you for following me on this journey. I look forward to reading your comments. Be forewarned: There are spoilers everywhere. Don’t forget to check out my previous post in the Philosophizing TWD series:
Philosophizing The Walking Dead S3E11 I Ain't No Judas and Liberalism = Paternalism

Rick and company (Carl and Michonne) pass a hitchhiker screaming for help early in this episode. Rather than stop, confront or help the stranger, Rick continues driving. Leaving the desperate dude to fend for himself. Why, when Rick has gone so far out of his way to help those in need, does he abandon the hitchhiker without flinching? Is it just paranoia on Rick’s part or is there something else going on? The mission of the trip is to collect guns in order to prepare for war with Woodbury, yet this conflict is the normal state Rick and the survivors have been in since the beginning.

At the beginning of the series, the survivors were still closely tied to pre-apocalyptic morals would have never left the hitchhiker without intervening. The survivors had not yet developed a sense of paranoia regarding strangers. The strangers that they were lucky enough to run across while erratic, or weird were still able to be folded into the pack. And even when Merle, made an attempt to grab power and they left him behind tied to a pipe, the survivors realized the shadiness of their actions and when back to save him.

Why does the hitchhiker not receive even a second thought from Rick when he took a crew to rescue Merle? Strategically, Merle was a key to Daryl’s stability. If Rick was not able to rescue Merle or at least show an authentic effort to rescue him then Daryl would likely abandon the group. At this time, Rick was still under the feeble-minded and desperately seeking Lori’s approval, while Lori was playing Rick and Shane off each other in order to seek her own counter-intuitive survival. So, while at this time Rick might make a hard decision he would nonetheless desperately second guess himself until he was convinced by others that he was doing the right thing. 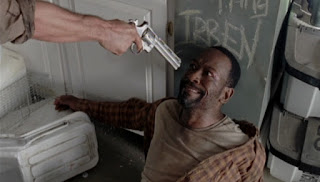 Between then and now a new Rick emerged. A Rick who, with Lori dead, could now finally act without approval. A bold, don’t-give-a-shit-Rick appeared out of the neurotic worm filled carcass.

In the first quarter of Clear, Rick is reunited with Morgan. Morgan, you probably remember, was the first person Rick met after waking up from a coma and wandering out into the world. Morgan camp out until he gains his strength and promised to make a call on the radio every day at noon so Morgan could find him. Rick had given up hope of ever seeing Morgan again, and now he was confronted with a very different person. This Morgan had the crazy bug and was obsessed with his own survival to bear witness to the guilt of losing his wife and son. The main difference between Rick and Morgan was that Rick had a support network to bolster his sanity even when he made stupid decisions, while Morgan was left to his own cognitive devices.

What is it that distinguishes these two characters in Rick’s mind? Because Rick’s choice to abandon the hitchhiker to the elements appears arbitrary outside blind survival. And blind survival has never been Rick’s thing even at his worst. Maybe that point of abandoning the Hitchhiker is to show a new transition in the Ricktocracy? A shift to something more ruthlessly republican? An ethos akin to the zombies. Do whatever it takes to secure your next meal.