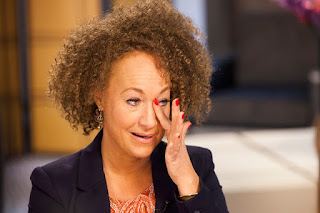 Rachel Dolezal got under conservative and liberal America’s skin by being outed by her parents for not being as black as she claimed. The NAACP president of Spokane, Washington, Dolezal was not exactly black we refer to when talking about a black person. At some point in Dolezal’s life, she decided to stop performing whiteness and began performing blackness. This begs the question, how authentic was Dolezal in “acting black?”

On the right*, a conservative outburst of pseudo-intellectualism decrying the liberal agenda’s allegiance with transracialism. And not too deep under the service an argument that we live in a post-racial society. So even though we should recognize Rachel Dolezal’s performance of blackness as a sham the liberal agenda’s racial framing misses the point that focusing on racism creates racism by not talking specifically about Rachel Dolezal’s character. But even if we talked about Rachel Dolezal’s character we wouldn’t need to bring her into the spotlight because such a scam if not framed around race should not draw media attention because Dolezal’s racial mimicking is not what counts. What counts is that she lied. One of the more insidious, points hidden

On the left, Liberals excessive empathy goes so far as arguing that Dolezal’s performance of race is a brave act where she is taking on white responsibility for racism. That Dolezel identification with black culture is a normative stage in the develop of sympathy towards black suffering. Ali Michael’s argues


[Dolezal] is an extreme example of a common phenomenon. The "immersion" stage is typified by White people taking more responsibility for racism and privilege and often experiencing high levels of anger and embarrassment for racism and privilege, which they sometimes direct towards other Whites. They sometimes try to immerse themselves in communities of color, as Dolezal did. She's not alone (The Huffington Post, 2015). 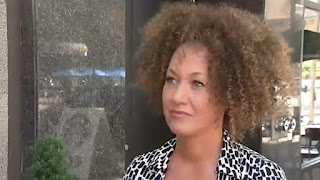 The right portrays racial identity as both something that requires purity and something that does not exist in a relevant enough way to matter as a character trait. The left portrays race as something more fluid. Taking on a racial identity is about infusing the struggles and history of a group into one’s identity in such a way where you feel imbedded into the “holy spirit’ of a racial group. In a sense, the left's argument also is based on a post-racial society. One where racial identity is fully detached from a criteria in which we are able to use the word “black” to describe everything. By using any content that seeks to fill the word “black”, the word effectively means nothing.

The Right and The Left are post-racial for the same reason. To confuse the masses. To encourage the masses to engage in a debate that has little relevant content to racism, race or the lived reality of Rachel Dolezal.

Dolezal makes an absurd comment for a professor of race studies, that she never used a peach crayon when drawing herself as a child. Dolezal’s and the Right’s reduction of race to purity echo’s the one drop rule. The rule legislated that if a person had even one drop of black blood he or she became black.

The problem with this whole debate is that no one individual or organization owns blackness. Nor does blackness own blackness. Ethnic color coded identifications are fabricated social constructions used to unnaturally subcategorize humans by naturalizing these fabricated colored identities. Which is not to say that ethnic identifications don’t matter, but to say they only matter in so far as they are used by competing groups to control human behavior and ideology.

The Right is right. We are taught from a very early age to cherish ethnic, cultural and family characteristic in such a way where we internalized these traits into our identity - our very sense of self. Blackness becomes not just a color but a whole complex network of behaviors, internal identities and way to codify the world. Racial identification, or any identification taken dogmatically, structures our very relation to the world in such a way where we engage with the world not as a free actor but as a black, white, brown, or red person trap to see ourselves through a racial amalgamation. This racial amalgamation blinds us to the fact that hegemonically uniting large groups of people who all have varying histories into one narrative post-racializes history. For example, by calling the civil rights struggle a black struggle, and using the word black to identify a multiplicity black social each group is denied identity. 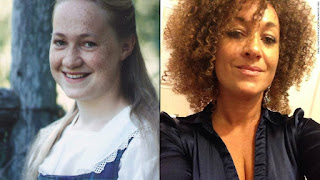 The point that both the Right and the Left miss is blackness is owned by nobody. Not even black people. Blackness is not a brand like Coca-cola. If someone steals Coca-Cola’s recipe and begins selling the soda as Bacon-soda, Coca-cola would be in their legal right to sue for copyright in infringement. While blackness is created and recreated by the lived experience of the groups and individuals that perform blackness on a daily basis there was never a point where a group of people sat down to legally define and trademark what it is to be black. The category of blackness is something which changes over time and changes over time in different geographical locations independent of any ruling order’s mandate.

So, what can we say about Rachel Dolezal? Yes she lied, but not about her cultural identity. She admitted to lying as she developed her political persona in order to establish an identity that would be translatable to her political base. But a politician lying in America is not news. Lying is the only way a politician can be a politician in a capitalistic democracy. A politician getting caught in a lie is hardly something out of the ordinary.

What is curious about the Dolezal debate is the use of the word “transracial.” Is Dolezal transracial? Is transracial a coherent concept for describing the performance of non-normative cultural identity? Does this mean the Offsprings song, Pretty Fly For A White Guy was really about transracial identity?