The Woman (2011) Or Eating The Fingers of Male Supremacy

Authority isn’t something you can force on a system without inspiring resistance. But this exactly what the father in the film The Woman attempts. Although, the father may get temporary compliance through shows of force and physical brutality he will also inspire a sense of injustice. An injustice that inspires it's counterforce. The film The Woman exposes the impotence autocratic authority and provides a path for rebellion.

The father brushes the woman’s hair and cringes at the putridness released. Shaking off his disgust he inspects the woman’s teeth pressing his fingertips against her lips. Like a Venus fly trap the woman snaps, biting down and tearing off the father’s finger. She chews it, he pulls back screaming, then she spits out the man’s wedding ring as if it was a seed from a watermelon. The ring hits the floor with a metallic ting.

The little gesture of brushing a woman’s hair from her face, even when she isn’t chained up in your basement demonstrates a kind of dominance or rather a kind of biopolitical ownership. Let us compare this to two people posturing against each other as if they are going to fight. The individuals may begin standing tall. Encroach on the others face. Going nose to nose. Voices may escalate beyond the opponent's current volume. The ritual of going just beyond is a regimented war dance. Each individual is attempting to show dominance by inspiring fear.

Brushing a woman’s hair away from her face works the same way. Physically the father moves the hair to unblock his view. This assumption that this territory is open for his direct intervention challenges the right to one's boundaries. By unblocking the woman’s face the Father enforces the Father's preference for the Woman’s performance of self.

Even loaded with romantic intentionality the brushing gesture takes claim over the women’s physicality and subjectivity. In Zombieland, Columbus desperately clings to the emo fantasy of brushing a woman’s hair over her face.

Columbus: Someone's ear is in danger of having hair brushed over it…

In the second half of the film, the father, drags The Woman outside to spray her with a hose in front of his family. The Mother and Eldest Daughter are noticeably agitated by becoming actors in the humiliation of The Woman. The Son on the other hand keeps a straight face. The same straight face, he kept during an early scene in the movie where he watches a group of boy’s hold a girl against a garage door. The Son watched the events calmly and picked up his basketball to continue shooting hoops. This lack of empathy is more than a banality of evil. The Son may be a cog in the wheel of his father’s authority, but he is no simple henchmen blindly following orders. The Son is invested in cruelty out of a sense of enjoyment. The son’s gaze is not the look of an observed too shocked to react, but a menacing observer fully engaged spectator to cruelty.

In the last third of the film, The Mother catches the Son molesting the Woman and confronts The Father. Explicitly connecting Father’s brutal behavior to the Son’s behavior. The Father at first appears concerned and asks the Son to look in his eyes when he is talking. The Son does not respond and the father chalks the child’s behavior up t0

Boys will be boys 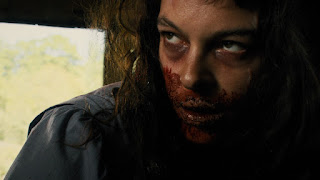 The double talk rattles the Mother and she lets loose the fury she has been holding back and argues a case about the risks for the family in keeping the Woman hostage. Although the plea may be well-meaning it is still located within the authority of the Father's control. There are very real legal and interpersonal risks of keeping a hostage, but what the plea misses are the moral argument that would undermine the father's authority. Keeping the Woman as a hostage is not wrong for the harm that it may cause to the family, it is wrong because of the harm the family is causing to the Woman. The Mother’s pathetic moral plea is still encased in the families supposed moral superiority over the savage Woman.

Breaking free from the oppressors logic is not as easily as it seems. Even the obvious challenge to the father's authority can still rely on the credibility regulating the father's authority. The clear revolutionary in this film is the youngest daughter. Too young to have the Father’s authority, framing her sense of existence the girl acts on her own accord, independent dialectic of the family stability and the Woman’s irritation to the family’s structure. There is an adorable scene where the little girl sneaks out at night to visit with the Woman. She plops herself on the storm shelter’s doors and begin playing a song on a small cassette player.


When I am lonely I listen to music

The Father on the other hand, views the woman at one and the same time a challenge to his white-male-nuclear-family-supremacy and a savage that still has enough control over her subjectivity in order to submit to the father's authority. The abjection the Woman’s presence rattles against the grain of the family dynamic is a wholly othered subjectivity that exists independent of masculine control.

The Woman defies authority. Even under the fascist grip of a normative nuclear family the Woman carves out a space all her own. Chained beaten and tortured the Woman resists without hesitation the Father's attempts to mold the Woman into a submissive caricature of femininity. The Woman’s wildness in this sense has a stronger sense of clarity than the stern evil of the Father. Steeped in conservative religious fervor mixed with autocratic misogynism the Father lost more than his finger when the Woman chomped off his finger.
evil family Fascism Feminism Finger Foods horror Marriage Misogynism Philosophy The Gaze The Woman Yesallwomen