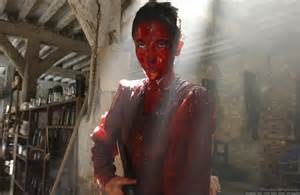 Yasmine is given a key character trait that allows her to fend off a family of cannibal nazis. She is not gifted with strength, a father who was a Navy Seal or the crafty bomb making skills of Macgyver. All Yasmine has is a case of the preggos. A squirmy little parasite growing in her gut conspiring to be born.

Pregnancy isn’t much of a superpower. Sure, you might get some time off your menstrual cycle, but what you get in return is cramps, bloating and compulsive cravings for fish flavored ice cream. Yasmine has the odds stacked against her. In the opening scene Yasmine and the crew, she belongs to are fleeing from a heist job during a riot in Paris. During the heist, Yasmine’s brother is critically wounded and taken to the hospital. Just before the police close in on Yasmine her brother whispers


Keep it.
Keep the baby.

Yasmine flees before she has time to respond and leaves her probably dead brother. And off she goes speeding off into the French countryside to meet up with the other coconspirators. Did her brother dying wish impact her feelings towards the baby? Before she has time to ponder her brother’s dying wish she is taken hostage by a cannibal nazi that is out to turn Yasmine's womb into their own personal baby factory.  But there is a scene that provides an answer.

Midway through the film Yasmine tethered to a cell wall by a chain shackled to her neck. Outside the cell pigs gather. The floor is wet and dirty mud. The boyfriend (also shackled to the wall) snaps the chain holding Yasmine and encourages her to break free. She digs a hole under the cell wall, and as she digs the hole fills with water. With a final word of encouragement, she squeezes herself through the hole. 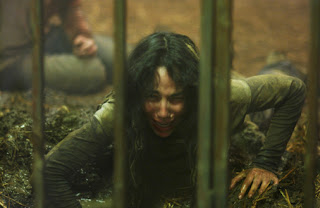 Does not Yasmine’s escape call attention to the miracle of birth? A fetus in a damp womb tethered to a mother by an umbilical cord. Suddenly a wet hole opens and a baby is yanked into the light to be spanked.

But is Yasmine truly reborn?

What kind of power reside in birth. A woman is inseminated. Cells divide. Stuff grows. But, all this is automatic. Biology doing its thing. Along with hormones, an idea enters the frame. The girl's life is not just her own. She is the incubation chamber for anything from Hitler to Gandhi or one of those boring people that find himself caught between boredom and irrelevance. The mother is something which contains something ontologically more than herself. This human worm widens not only the mother's palette but her sense of existence.

The turning point for Yasmine is when she decides to live for her child and not for herself. The moment where this becomes apparent is during the dinner scene where Yasmine is resisting the family's authority and they are desperately fighting to maintain her subservience. The father then tells the eldest son to kiss Yasmine to seal her matrimonial fate. The look on her face is jarring. Even though she has crawled through pig shit it is at this moment that she realizes the full extent, not only of her dilemma but of her baby. If she does not act, her child will become a Nazi preyed upon by an incestuous family attempting to recreate a pure bloodline through her womb. Yasmine does what any mother would do in her situation. She takes a knife to the throat of the oldest Nazi in the room.

Yasmine is a mother and that is all she had going for her. That is until she became trapped in a cannibal Nazi plot to repopulate the earth with deformed fascists. Throughout the film, she is born again. She becomes identified with the growing life inside her as she scrambles to survive. Baptized in pig shit and the blood of inbred Nazis, Yasmine ultimately takes on the title she wanted to abort.
babies Baby Baptism Fascism horror Motherhood Nazi Philosophy Preggos