Showing posts from July, 2015
Show all

The Woman (2011) Or Eating The Fingers of Male Supremacy

Authority isn’t something you can force on a system without inspiring resistance. But this exactly what the father in the film The Woman attempts. Although, the father may get temporary compliance through shows of force and physical brutality he will also inspire a sense of injustice. An injustice that inspires it's counterforce. The film The Woman exposes the impotence autocratic authority and provides a path for rebellion. The father brushes the woman’s hair and cringes at the putridness released. Shaking off his disgust he inspects the woman’s teeth pressing his fingertips against her lips. Like a Venus fly trap the woman snaps, biting down and tearing off the father’s finger. She chews it, he pulls back screaming, then she spits out the man’s wedding ring as if it was a seed from a watermelon. The ring hits the floor with a metallic ting.
Post a Comment
Read more

Dear Zombies - I killed my Playstation 3 with too many movies!

By SquidXIII - July 20, 2015
Dear Zombies, Today I burnt out the Bluray player on my Play Station 3. From what the internet says the drive was going to die eventually. They can only take so many hours of spinning discs before they go kaput. My life has been frantic in a good way. I have been busy at work. Kicking ass and taking names. We just got over the hump of our project and will be starting a new one next month. Things aren't going to slow down but they should be less intense. Not that I have any excuses for not posting more often. I started a post on The Woman. I plan on finishing it sometime this week. I miss winter in Chicago. Even the rattling radiators.
Post a Comment
Read more Yasmine is given a key character trait that allows her to fend off a family of cannibal nazis. She is not gifted with strength, a father who was a Navy Seal or the crafty bomb making skills of Macgyver. All Yasmine has is a case of the preggos. A squirmy little parasite growing in her gut conspiring to be born. Pregnancy isn’t much of a superpower. Sure, you might get some time off your menstrual cycle, but what you get in return is cramps, bloating and compulsive cravings for fish flavored ice cream. Yasmine has the odds stacked against her. In the opening scene Yasmine and the crew, she belongs to are fleeing from a heist job during a riot in Paris. During the heist, Yasmine’s brother is critically wounded and taken to the hospital. Just before the police close in on Yasmine her brother whispers Keep it. Keep the baby.
Post a Comment
Read more

Tell me about yourself and your writing? I'm a practicing pathologist of twenty years' standing. I've published over a dozen crime novels, the latest being MEMENTO MORI, which is something of a departure for me. Most of the rest have involved a lot of forensic pathology (the Eisenmenger series) but this one is about love and madness, and the relationship between the two. Why do you write? Being a doctor tends these days to be fairly soulless, since we're under so much pressure, and since medicine is increasingly protocol-driven. I did quite a lot of medical research when I was younger and found that creative, but there's very little that's creative in modern medicine. Writing is the perfect antidote to that and the other frustrations of modern life. What’s the process like? What inspired you to write Memento Mori?
Post a Comment
Read more 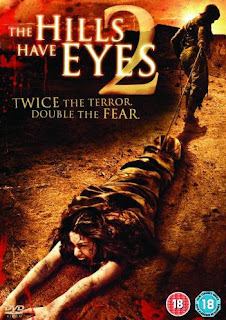 One more late night trying to get through a horror movie without googling something on my phone. Tonight, I popped in The Hills Have Eyes 2 (Remake). Maybe I was a different person half a decade ago, but I remember liking this film when it came out in theaters. What I remembered was a troop of National Guards folks VS the savage mutants in the hills. But the film plays out like any other slasher where the foreign policy allegory is made abundantly clear as the minorities are stabbed one by one until the last remain whites stumble out into the sunset. I've started a new thing where I am taking more elaborate notes after each movie. Even breaking things down into five paragraph essay format in order to shoot for clarity when writing. I was left, like the actors in this film, uninspired to dig any deeper into the film. Although, the sets stood out to me. The damp caves didn't have that gritty glow that the sets in the Texas Chainsaw remakes, but nonetheless they had that post
Post a Comment
Read more
More posts