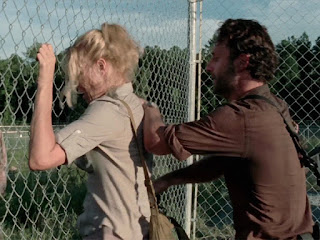 Welcome to our journey into the guts of The Walking Dead. What kind of journey? A philosophical, psychoanalytical and political kind. What I would like to do over the next couple months is dig through the Walking Dead episode by episode to see what it can teach us. Thank you for following me on this journey. I look forward to reading your comments. Be forewarned: There are spoilers everywhere. Don’t forget to check out my previous post in the Philosophizing TWD series: Philosophizing The Walking Dead S3E10 Home and the Homeless Zombie

Andrea is on a mission. Lacking the political skills or facts on the ground, she sets out to talk Rick into a peace treaty. Oblivious to the obvious fact that neither Rick nor the Governor want or will settle for peace, Andrea lets her liberal multiculturalist flag fly once again. Is not Andrea's seemingly selfless mission for peace similar to charities, religious leaders or general purpose custodians of the liberal agenda attempting to weave themselves into the politics of third world countries?

Can we all just get along? Could you not imagine the ridiculous scene of a church group going into the thick of the genocide of the Palestinians by Israel singing hymns? On the one hand, such a scene would immediately jerk at the tear glands. Oh, what a thing for those folks to do. So lost in their sense of peace that they would go caroling through a battlefield? But, on the other hand, how patronizing and paternalistic this wheel would be to both sides.

Americans are fully invested in their historical amnesia to the point where they have lost the memory of the blood thirsty racism that structures the countries core. A racism so deeply hid that the kernel of hate is foreclosed in delusional acts of charity. In the not so distant past the American racist would be explicit about his hatred. Selling photos of a lynching at a lynching as the Bob Dylan song goes. Now the supremacist’s superiority is embedded into their helping hand.

What is Andrea’s moral supremacy based on? What is the founding gesture of her stance? What gives her the gumption to declare that peace should magically appear between two warring factions? Andre’s argument to The Gov for peace is based in her overly ambitious view of her capacity to influence the Ricktocracy. Her argument to Rick is rooted in projecting her pity on the Ricktocracy. Grimy and war-torn the Ricktocracy stared back at Andrea as if she was puppy licking a light socket.
Peace, if it is going to be the political push for the day needs to be rooted in the common interests of the political bases. Not in the ideas of the individual. Pushing peace for peace’s sake against the grain of the political consciousness is delusional and drips with the garbage juice of liberalism. Protecting all cultures from each other at all costs. As if there wasn’t moral clarity on side other.

While there is no god-like perch from where we could objectively observe the righteousness of Woodbury over the Ricktocracy or vice versa this does not mean that either group cannot find truth in their individual communities. If either side sided with peace it would mean the genocide of the community. Siding with peace would put the community in a position of weakness unprepared to truly commit to itself. This is the point that Andrea misses, the political clarity of the GOV and Rick.

Check out the next post in this series: Philosophizing The Walking Dead S3E11 I Ain't No Judas and Liberalism = Paternalism

Andrea is up to her same old peacemaking tricks. Hoping to negotiate peace between Woodbury and the Ricktocracy, she embarks on a naive journey. Andrea, in all her lack of wisdom, convinces the Governor to let her trek to the prison to talk to Rick. She assumes peace is possible for two reasons, her lack of political context and her liberal idealism.

Andrea is kept in the dark by the Governor. In a Stalinistic manner, the Gov only circulates only the political framing he wants those under his power to know. Depending on the responsibilities of each of his Woodbury lemmings he gives a different framing for their tasks. The Gov paints the picture of the Ricktocracy as terrorist invading Woodbury for purely self-centered and evil intentions. Yet, withholds the fact that he struck first by taking Glenn and Maggie hostage and torturing them. With the Woodbury soldiers, he provides slightly more context but only enough to demonize the enemy to rouse the hatred to fuel the grunts act on the Ricktocracy. The Governor plays Andrea in a unique way. He feigns compassion and reasonability in order to get into her pants and in order to control her heart. Not only is Andrea’s liberal idealism fueled by her supposed love for the Governor but also the delusional idealism at the very core of liberalism.

Andrea and Liberalism's delusion is that peace is possible. That peace is possible despite and because of the impossibility for peace. Is not Andreas fervor for peace not unlike the liberal who take a brief look at the Israel / Palestine dispute and argues that if only both sides could sit down and reconcile their difference than they could come to find peace. The problem with this is that free market capitalism thrives in its very foundations on anarchy in the means of production.

What is being produced? Community. A radically valuable commodity in the apocalypse because community enhances the survivability of the individual. One key property of the kind of communities that exist is the ideological identity of each group. The communal hierarchy and its ideology create a specific current of decision making. What Andrea is blind to is that both the Rickatorship and Woodbury are totalitarian. Both communities defer their decision making to a specific individual - the dictator.

The dictator’s capacity to make decisions is the most highly valued quality of both communities, but while they are valuable they are necessarily contradictory. A dictator governs though total compliance, not just to his decisions or orders but to the ideology out of which those decisions flow. Acting on the orders of a dictator is not enough to guarantee the stability of the social order and the authority of the dictator. The rabble of the Ricktocracy (or Woodbury) must also believe in the dictator at times even more than the dictator himself.

There is a key scene that establishes this point where Hershel snaps on Rick as he attempts to walk out of the room:

Get back here!
You once said this isn't a democracy. Now you need to own up to that. And do something.

Check out the next article in this series: Philosophizing The Walking Dead S3E12 Clear and Unpresent Danger