Scream 4 (2011) and Reconstructing the Unconstructed 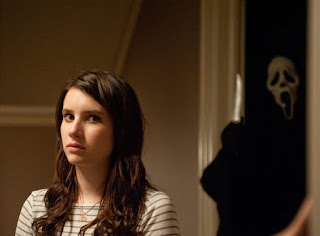 Does Scream really break the rules? Does the film strike the structural kernel of the horror genre? Is self-awareness of the meta-intertextuality of horror really subversive, or does Scream cling dogmatically to the banalest aspects of the films it seeks to critique?

Saw is cited then counter as gross rather than scary. Disqualified by its post-9/11 torture violence, then revived for the films creative kills, then counter for its lackluster character development. The unstated conclusion, here, is that the film that we are about to watch is a superior class. But is this the case?

The film revives/continues using an identical set of tropes that the film articulates its freedom through deconstruction. The masked Ghostface killer tracking down targets one by one until ultimately singling out the target of its terror. Ghostface appears from shadows, or around corners as victims stalk dark hallways. The kills in the film are typical repeats of millions of on-screen scenes from slasher flicks. You can only do so much with a knife if you only learned to color in the lines.

What is truly unique to Scream is not its self-awareness but its soap opera drama. In no other slasher is the killer so narcissistically up in orchestrating their fame. Is this not what the world has come to? Celebrities divining their popularity through acts of public deprecations?

Scream wallows in its self-pity significantly more than it realizes. Portraying the same story we have seen ad nauseum for decades, repacking it in pop culture and genre references all the while mascaraing behind its compulsive meta-rhetoric.

Is there anything truly unique in a film that lays bare the tradition of a genre? There is a sense in which the Scream franchise is to horror what Nirvana was to punk. A point of departure, yet like a baby who first learns to play with its own poo, artistically oblivious to its absence kernel of creativity. Too full of itself to realize the impact it would have on its market.

It’s not that horror films were not made for money before Scream. Freddy, Michael, Jason, and Leatherface are cases in point. Although, Leatherface less so, each film was articulated from the ground up with an eye to the market. Selling tickets through slick marketing campaigns that marketed an icon who tapped into deep-rooted human fears. 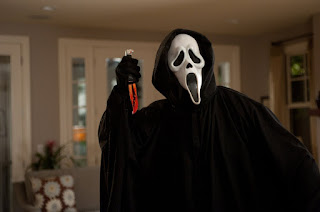 The Ghostface mask hides more than the killer’s identity or identities. The mask differentiates itself from Michael Meyer’s mask because it displaces identity as such. The dialectic between the red herrings propelling near every character as a probable killer obfuscates not unlike the masks the notorious hacktivists of Anonymous.

Every general action is presented as singular rooted in an idea. Unlike, anonymous the cast of characters that come to take on the mask do not share a political agenda. Rather, the killers act like a constantly fragmenting terror cell. Each generation attempting to undermine the last by repetition.

Each film engages intertextually with the last as well as its filmic contemporaries. Identifying or rather fabricating rules and taking them as commandments. But, we retrospectively apply the “Scream Rules” to previous horror films, we find that the rules undo themselves. While there are moments where a republican morality is enforced with a machete or chainsaw, there are a multitude of deaths in 80’s horror film that simply do not hold dogmatically to these assumed rules.

But, if we review the post-scream films we find that the rules are rigorously followed. Many films even going out of their way to explicitly establish the morality of a given character as if they were completing a logical proof with a butcher’s knife. Q.E.D.

Scream 4, plays a unique role in the franchise in that it is the only film to take place in the post-post-modernist space. Where Scream 4 stands out is in its ability to clearly abide by its own rules, while cruising contemporary horror for totally fully deconstructing the rules to meaningless. Unlike the first film which fabricates a set of rules in order to deconstruct slashers, Scream 4 clings to its original rules as a matter of pride. As if it was a matter of desperate loyalty to the 80’s to claim its origins in decades of tradition.

This return to an original promised land is the ultimate republican ideology. First, it claims that there was such a past where everyone’s bootstraps were all they needed to live a meaningful and fulfilling life. Secondly, it argues that we should return to this imaginary bootstrap land by reversing polity to a more Reaganomics like state.

In kind, Scream fabricates a set of rules, but also claims that the films are located within the lineage that the rules encompass. In the Scream 4, the rules are used to disregard contemporary horror films rather than engage in a proper analysis. Anything goes in modern horror. The rules are that there are no rules. This is made clear in the disconnect between Scream 4 and the actions that take place on film where the rule that there are no rules subverts all the rules. The key example of this is the rule that in order to survive a modern horror film you have to be gay. Which, when cited in the film is undermined with a deadly blow. 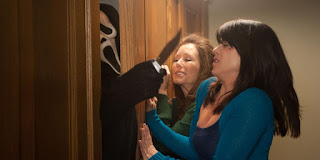 Let’s saw into rules in relation to some of the films cited in Scream 4. Saw and Hostel were discarded out of hand in the opening credits as failing to be quality horror because rather than centering on the production of fear created disgust. Films like Saw which formalized overarching rules, and rules for each specific game pushes the Screamic-rules to the end. By oversaturating the Saw series with overlapping and contradictory rules. Victims can be anyone, and any moral justification from laziness to drug addiction could become a justification for a game. Defacing the morality of each character as a means to justify their death to the viewer. Fascist, no?