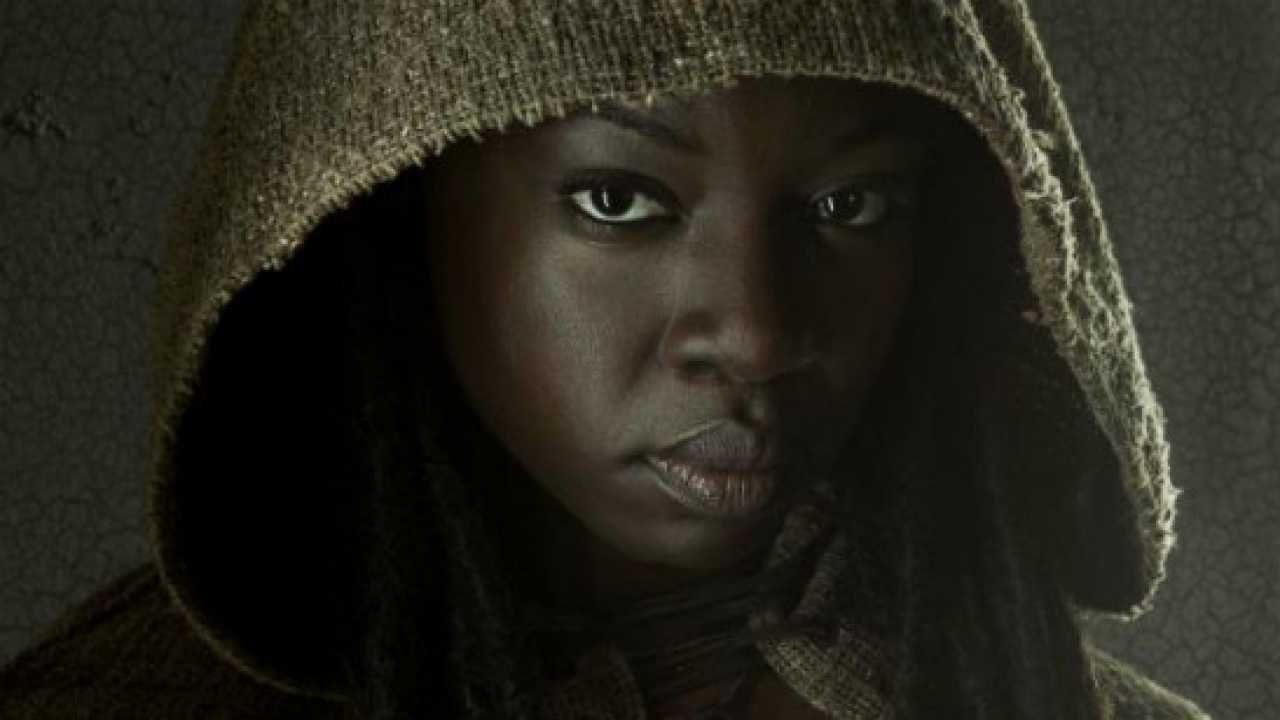 Welcome to our journey into the guts of The Walking Dead. What kind of journey? A philosophical, psychoanalytical and political kind. What I would like to do over the next couple months is dig through the Walking Dead episode by episode to see what it can teach us. Thank you for following me on this journey. I look forward to reading your comments. Be forewarned: There are spoilers everywhere. Don’t forget to check out my previous post in the Philosophizing TWD series: Philosophizing The Walking Dead S3E7 When The Dead Come Knocking and Political Torture

Made to Suffer caps the first half of season three with a bang. Rick and company launch an assault on Woodbury. Michonne goes rogue out of anger and attempts to assassinate the Governor on her own. But what the hell is Michonne so pissed off about? The Governor, of course, is a seedy character, but what has he done that warrant’s Michonne's Rage? Let us turn to the comic to see what we can dismember.

In the comic Michonne that was captured and tortured by the Governor. What had happened was after the helicopter crashed in the woods, Rich, Michonne and other go to investigate. They run into The Governor who takes them hostage. After a guided tour of the camp, The Governor tells the group that he is going to torture them to find out where their camp is. In order to prove his seriousness, he lops off Rick’s hand. Michonne goes on the offensive and bites a chunk off The Governor’s Ear. Ultimately captured, Michonne is chained in a makeshift interrogation room and told that she is going to be raped every day until she finds a way to kill herself. Following the comic’s narrative Michonne’s vigilante anger is rightfully justified. 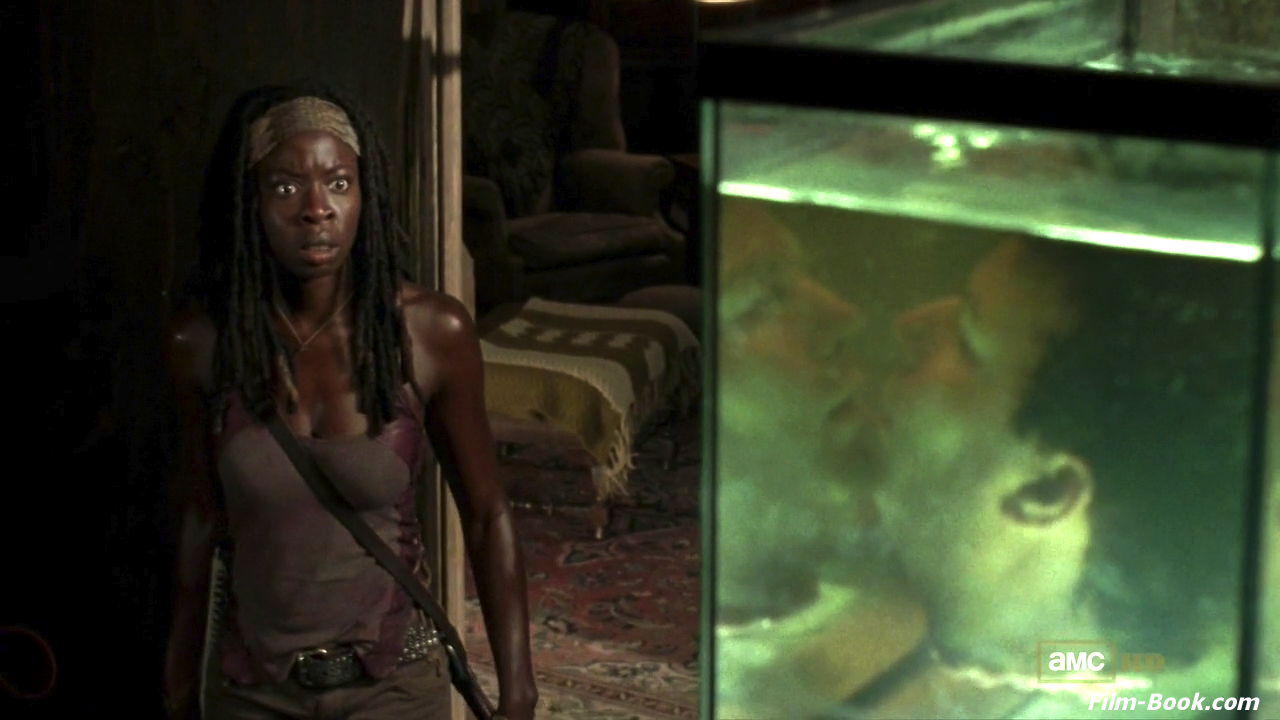 In the Tv Show, on the other hand, Michonne narrative is stifled and presents her as emotionally erratic and socially psychotic woman. The TV show pairs Andrea and Michonne as survival buddies after the zombies hit the fan, and Hershel’s farm is abandoned. As they travel, Andrea is getting sicker, and Michonne is taking care of her like an abandoned puppy. Boom! A helicopter crash in the distance and they go to see if there are survivors. But what they run into is the Governor and his thugs. The Governor kidnaps Andrea and Michonne and brings them to Woodbury. From the get go, The Governor gives Michonne the Hebbie Jebbies, and tries to convince Andrea to leave Woodbury. Unable to convince her, Michonne rolls out. Followed in tow by Merle, who is under order to kill Michonne. Michonne dispatches Merle’s crew and makes her way to the prison. Where she informs the survivors that Glenn and Maggie have been kidnaped.

Let’s isolate the show for a moment. How exactly did the Governor wrong Michonne?  The two obvious grievances are that The Governor drove a wedge between Michonne and Andreas relationship and order Merle to Kill her. I’d be pissed too. Here I am, just minding my own business walking out to loot and pillage abandoned homes and boom some pseudo-reformed racist attempts to kill me. I’d want to choke a punk. But, the quality of this rage is simply not equivalent to the rage justified by the comic book. It’s almost as if the reader would have to have foreknowledge of the comic book in order to understand the forces driving Michonne’s actions. The TV show leaves barren the plot that would justify her rage. Without a rational basis for Michonne’s rage the show only regurgitates the all too common angry black women. The wildly unpredictable black woman stereotype prone to irrational outbursts of rage. (For more on irrational VS rational rage see: 28 Days Later(2002) Or Eating The Brainz Of The Post-Modern Zombie) 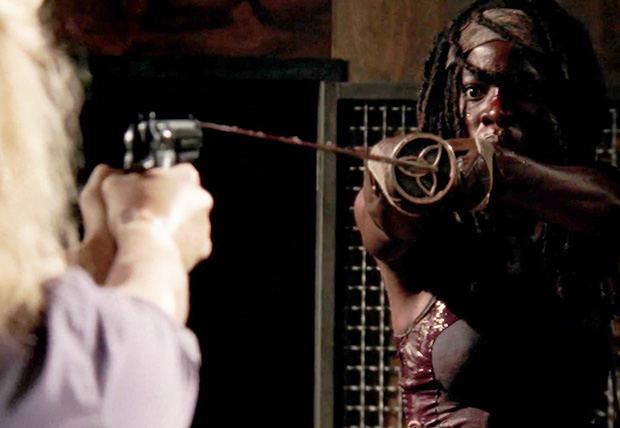 I am left wondering why the TV show picked this plot contrivance over the original. As stated above, by reproducing racist stereotypes the TV show taps into comfortable (and subtle) racist bias that are widespread in American society. Put simply, racism sells. By avoiding the uncomfortable – showing a strong African American woman tortured by a sadistic white man – the TV show plays it politically correct. Additionally, shifting the torture to Maggie and Glenn the show raises the value of the couple as a commodity. In a similar fashion, the displacing the amputation of Ricks's hand to Merle, the show is able to pay tribute to the source material and up the market value of the show. Because Rick is the star of The Walking Dead, portraying him as an amputee would cripple the relatability (political correctedness) the show requires to maintain its success. The popular bias of the American public against the differently abled blocks a fuller identification with the character. By Merle taking Rick’s place, the show avoids the need for consumer relatability by using a purposely difficult to relate to the character.