By SquidXIII - September 22, 2014
Earlier on in the week, I interviewed J.Q. Davis from The Official Website of J.Q. Davis about her zombie novel Turning Grace. Be sure to check out her spooky blog! 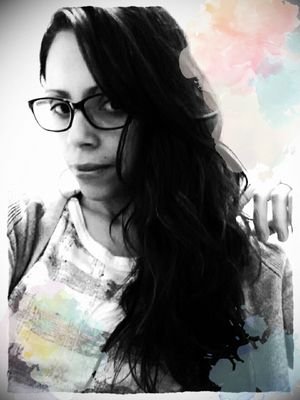 I was born and raised in New Orleans, Louisiana. I met a Marine about six years ago. We started dating and shortly after, he got orders to work in California. Having never lived anywhere else and thinking there was no way I was going to let this great guy get away, I decided to take a leap of faith and move. We got married and became the proud parents of three wonderful doggie daughters. We now reside in the desert, which isn't my favorite place in the world, but we make the best of it.


I managed to acquire a bachelor's degree in Healthcare Management, as well as a certificate in Medical Transcription. I am currently working as an administrative assistant at our local hospital.

I published “Turning Grace” on my birthday this year, June 10th. It's my very first novel, but definitely not my last.

When I was younger, writing was something that I always did as a hobby. The first story I ever wrote was about a princess in a castle. I don't remember the details, but it was your typical little girl fairy tale. It was entered into a Young Author's contest and I actually won!


As I got older, I wrote short stories here and there. I became obsessed with horror and mysteries and my writing reflected that quite a bit. I wrote about haunted houses with mysterious dark holes that could eat you up and friendly killers that weren't really killers, but could kill you. Some of these stories made absolutely no sense, but it was fun to write.

I lost touch with writing short stories as a teenager, simply because I was more interested in boys and “chilling”. However, writing was still a part of what I did. I LOVED writing letters. And giving someone a birthday card? Forget about it. A simple “Happy Birthday” was not enough. There were no blank spaces by the time I was done.

Writing, to me, just seems very personal. It was always easier for me to write down how I felt or my thoughts rather than actually saying it.

What’s the process like? What inspired you to write Turning Grace?

I got the idea for “Turning Grace” while I was watching one of my favorite zombie flicks, “Return of the Living Dead 3”. I've always loved the zombie genre. Something about the walking dead and the gruesomeness of it was just...cool. I also thought, there has never really been a lot of zombie movies where we get the actual zombie's point of view. That idea coupled with the idea of someone actually living with zombie-ism as if it were a disease is what led me to the book.


The writing process was easy at first. I tend to just write, thinking of ideas as I go. About halfway through the book, I began to keep a journal for all new ideas and a time line, as well as a list of my characters and their qualities and characteristics. I found that this kept me on track and away from making mistakes or repeating ideas. As I wrote the first draft, I would go back to proof and edit. However, once I was done, I did more of that. I felt like I spent more time editing and proofing than I did actually writing the book!

If you know me at all, you will quickly pick up that the main character, Grace Watkins, is loosely based off myself. Appearance-wise, she has the same big, brown curly hair that I do. She loves comic books and Halloween and scary movies...like I do. She likes to keep to herself for most of the time, enjoying her one true best friend's company. She's just a normal girl. She doesn't fit into just one group of people. She's just...Grace.


Perhaps the most relatable characteristic that I have with Grace is that she is sick. I was diagnosed with a fairly uncommon form of liver disease when I was 21. Finding out I had a disease that was potentially life-threatening was very hard to understand at the time, considering how young I was. It makes you feel helpless and alone, which is ultimately how Grace feels.
Of course, we differ in that I don't feel the need to eat chunks of raw meat.

I believe that writers, and basically anyone in the arts, have this amazing ability to create worlds. To create something or someplace or someone. We can make up whatever we want in our minds and make it come to life. Grace feels very real to me. I feel like she would be someone that I could hang out with or get to know better.

Having this ability makes me feel very powerful.

My goal for this novel was not to make it really scary. Mostly, I was gearing more towards gore and shock. I love gore and blood. The more of it, the better. Zombies have never really been scary to me, like “Ahh! There's a guy with a chainsaw chasing you!”.


What scares me most about zombie-ism is the getting sick aspect of it. The horrible, painful things your body would do if you were becoming a zombie. I mean, you've got necrosis going on and you feel like death (no pun intended). I wanted readers to be grossed out on some parts.

I believe that only really scary part of the book is when Grace does something she truly regrets doing. Obviously, I can't give it away. However, I can say that writing it was both exciting and difficult. It was a climactic moment and while it was fun thinking up all of these ways to make it shocking, it was hard to make sure that it WAS shocking.

What did you learn about yourself while writing the Turning Grace?

Well number one, writing a novel is harder than I thought it would be. But upon publishing, I realized that I am capable of it.

I also learned that I truly do love writing. Although all the editing and proofing can be a pain, writing the story was so much fun. Whenever I would come up with new ideas, I would feel so proud of myself.

Grace is changing throughout the book. Her body is changing in ways that she can't quite understand. There is an instance where her mother says something along the lines of “It's just hormones.” She is a teenager who is smart, she isn't wildly popular, she has run-ins with the girls who are popular and mean, and she has a crush on a boy.

I wrote "Turning Grace" with teens and young-adults in mind. I'm sure that in some ways the readers may be able to identify with Grace on some levels. I would only hope that it will send a positive message, such as its okay to be different. Well, unless they are zombies. In that case, it would be awesome!

I am currently working on the “Turning Grace” sequel and I do put updates on it from time to time.