By SquidXIII - August 02, 2014
As per the blogging strategy I created last month I have focusing on writing about and watching zombie movies and reading Marxism this month. Last month romp through horror movies with women's issues (or errrr horror movies focusing on women's issues) was a success. I may slip in an American Mary and The Woman Post during Augusts because I didn't get to it. I'm excited to dig up and dig into some zombies!

My Zombies for August List includes:
Rammbock
Open Grave
The Night, Dawn, Day, Land, Diary and Survival of the Dead(s)
Dead Girl
28 days and weeks later
Dead Inside (zombie music. It rocks. So sad...)
Dead Alive
Contracted
The Resident Evils
(If you know any other zombie movies that desperately need to be interrogated drop me a comment)

I'm about a quarter of the way through David Harvey's The Condition of Post-modernity. So far its been the clearest book on the postmodernism I have read. Fredric Jameson book was too psychotic for me, but I'll give it another shot. I think David Harvey's clarity will help me with Jameson's nuttiness and crazy sentences.

I attend my second meeting at the local writers group. I decided to read a couple paragraphs from one of my posts. Based on the feedback I think what I need to do is include abstracts in my posts in order to lay out my key ideas in people-speak before I go into philosophical-babble.

The meeting started with a speaker who discussed publishing on Amazon. The one piece of information I might want to look into is publishing individual articles or set of articles on amazon. I think I could justify putting a couple blog posts up for sale. I will have to look into it. The over all process for formatting ebook is a lot less complicated then I had assumed.

I've started a doing some hardcore editing of my posts on Interrogating Ideology. I copied and pasted the giant list into evernote and added check boxes (4 of 17). My first from January were a mess. The editing process has been fun now that I stopped procrastinating about it. One of the first lessons I learned is that I've gotta be more hardcore about editing my posts before posting them. I've been a lot better about this the last couple weeks.

I realized I totally ditched my film diary I suggested in my last journal entry. I think this might be too time consuming. The other day I set a timer before began writing and realized I had been writing for around 3 hours. There was about 45 minutes of procrastination that set me back. None the less, I am super happy about the Rammbock, Divergent and Excision. Three very different types of movies. Excision was the most difficult to write because I'm a little rusty on my feminism.

Time management has been hellish this week. I got wrapped up in trying to find some html code to do some tweaking on the visuals of my blog. I lost a lot of time where I could have been writing. My response to this crazy behavior on my part was to adjust my Habidrpg to-dos. I love the site. I have a mother-$@#%ing dragon now. Nothing can stop me now from writing some awesome posts.

Also, after thinking about my first my Horror-philosophy series post. I realized I confused some terms and will have to do some serious editing so it can fit into my plans for future posts. In response to the feedback I got at the writers group I think my next post in that serious is going to be about why it is necessary to be critically engaged in horror movies (and movies in general). Capitalist's invasion and monopolization of our leisure time makes everyone a bunch of zombies. We must fight back reversing the power of our distractions to zombify us!

Oh I cleaned my desk. I have a zombie army! 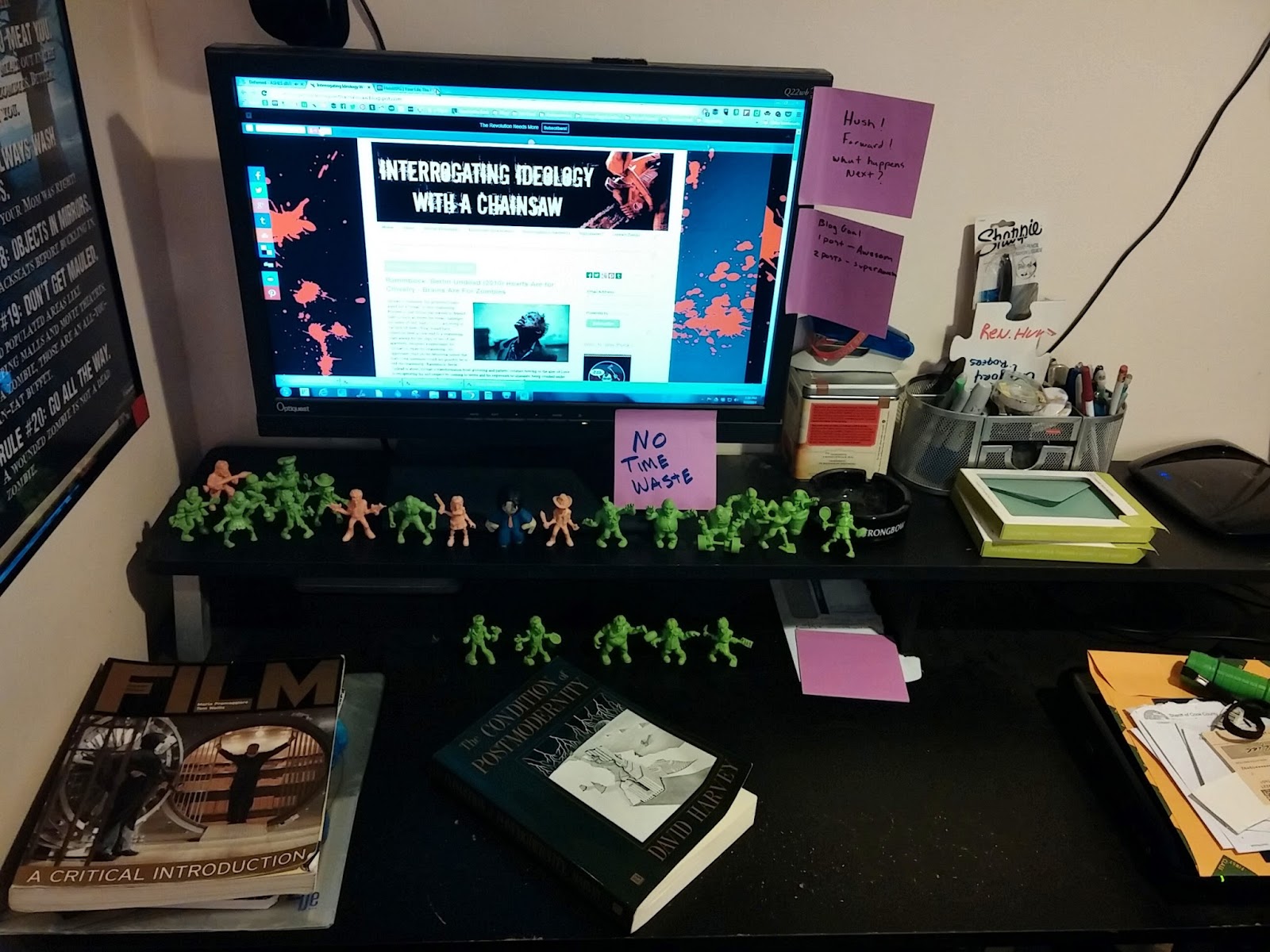