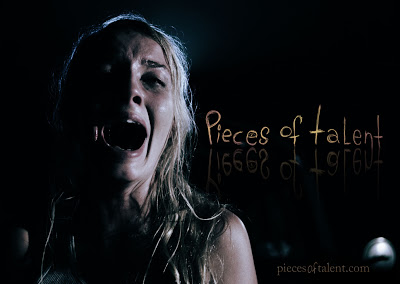 Acknowledgements: Special Thanks to Kristi Ray, Joe Stauffer, and David Long for autographing and sending me a copy of this film for interrogation. Don't be a booger! Go check out the flick: Pieces of Talent.

Pieces of Talent is about a phase in a dude’s life that many never exit. Before a dude learns to buy a chick flowers, he shoots spitballs at her face or deposits gum in her hair. A guy does this because emotions fire of in his befores there is a romantic schemata to guide his actions.
Missing this behavioral guide, compulsions drive a dude to act out. Jumping at any opportunity to have his feelings recognized. Of course, as we know, this behavior more than likely backfires. Girls focus their attention only to reject a guy. When a guy grows up, he learns a new set of behaviors, rooted in Disney princess narratives, and cultural chauvinism. The guy's role in a relationship with a girl is to save her from her demons. But, as dudes try to fix a chicks problems he treats her like a victim reducing her to her problems. Pieces of Talent is a film that straddles both of these phases in order to show that these masculine romantic strategies develop in order to protect guys from rejection. By stretching the ideological fantasy beyond is reasonable symbolic effectiveness these romantic strategies fill in the gaps.

Let me tell you a story. During 4th grade I remember having an ongoing count of the times I was forced to spend recess sitting in a classroom coping words out of the dictionary or endless writing a sentence that begins with “I will not do…” In the third semester, I counted the chicken scratch and arrived at 110. I thought it was funny at the time. Looking back, I was a chronic troublemaker. The thing that got me into trouble the most was teasing a girl that I had a crush on. Sometimes it was verbal. Or, one Valentine’s Day, where all the kids designed their own mailboxes out of shoe boxes, I delivered a particularly nasty anonymous letter. Probably suggesting she had cooties or some other blood sucking parasite. I call this time period in a dude’s life the “hair pulling phase.” The hair pulling phase is typified by a set of (mostly counterproductive) actions that a guy takes to get a girl to get a girl's attention.

If a dude ever moves out of the hair pulling phase finds himself in the “fix it” phase. In this phase, a dude selfless attempts to solve a chicks problems. So, if a chick is struggling in her acting career or complaining about her overbearing boss, a dude tries to swoop in and fix the problem. This is done either through advice or intervening in the problem. The “fix it” phase comes with a new set of problems. Unlike the “hair pulling” phase where chicks have a tendency not to be in on the game, in the “fix it” phase, there is an opening where a chick can capitalize on a dude’s compulsion to fix her problems. There is a great song by VAST that provides us with a great example.
The song tells the story of a guy who murders a girl’s boyfriend in order to save her. The twist is that the girl is using the guy. But, the bruises are self-imposed and she has a life insurance policy on the boyfriend. The guy enraptured in an opportunity to ameliorate her suffering becomes like a voodoo zombie on a revenge mission. In this example, the guy and the chick are both objectifying each other in order to use each other to solve their problem. For the chick, she is using the guy to make some quick cash, for the dude, he is using the chick not to alleviate her suffering but his suffering about her assumed suffering. The transference that dude protects on to her, is really an over-saturated empathy more akin to narcissism than compassion.

Traditionally most Slasher keep in tune to the Hair Pulling Phase, rather than the Fix It phase. The rationale for this is that the masked dude stalking a chick is an abstract one way communication. Michael Meyer’s stalks his sister, without her knowledge, offs her friends and displaying them in her path. The display of corpses functions not just to scare the chick, but to provoke her to attention to a singular focus. By eradicating her friend and acquaintances he is foreclosing her social network and creating a space where the only relationship she has left is with the Slasher. As we know, the scheme does not work as intended. Rather than overwhelming the girl with his presence, she transforms clawing her way out of this oppressive relationship killing or subduing the Slasher. In the end, the Final Girl is more final than she appears. Not only is she the last one alive, the entire social network that she belonged to is impaled and/or eviscerated. In the end, the Final Girl is left alone to confront a world that has suffered a radical symbolic shift. She is not who she was nor is her world what it was.

Trauma draws a line in the sand. Separating what you were from what you became. For this reason, I appreciate Rob Zombie’s Halloween 2 more than the rest of the internet. What the film shows is a survivor who, unlike the chicks in other Slashed sequels is psychologically damaged. Unlike, the original and the Slasher tradition, where the Final Girl bounces back like the coyote in Roadrunner, Rob Zombie’s Laurie Strode is traumatized and struggling to just exist in her world.

Pieces of Talent is a film about David Long’s misguided attempts to woo Charlotte. Charlotte is an aspiring actress working as a waitress at a strip club. David Long is murderous psychopath and filmmaker who, upon meeting Charlotte decides to make her something beautiful. This something beautiful takes the form of filming the murder of Charlotte's problems and editing these clips into an art house film. The film follows David Long on, his murder spree while periodically checking into Charlotte interacting with her boss and mother. When Charlotte and David meet to hang out she unloads her grief on David. The relationship pattern that develops creates an unbalanced Closeness. While Charlotte uses David as a garbage can for her grief, David understands Charlotte’s complaints as a scared confession. As if he had earned access to her trust.

Let us saw into why Charlotte trust’s David. When Charlotte meets David he is getting the crap beat out of him by a security guard at the strip club where she works. She swoops in and rescues him. She then helps him into the back of his van and drives him to a make out point. As sunset breaks, she opens the back door and we find David Long swaddled in a blanket she purchased him. What this reminds me of the kind of people who, after running over a bird take the bird back home and try to nurse it to health. One the one hand, you can look at this as a grand display of compassion. But on the other, the act is more about alleviating the projected suffering that person who ran over the bird is feeling. In the case of David Long, Charlotte demonstrates the latter. What is interesting is that when Charlotte interacts with the other characters in the film she maintains strict emotional guards. When the rich dude shoves singles into her cleavage she slaps him, or when her boss sexually harasses her she quits. It is only with David Long that she lets down her guard.

But is this trust earned? Ironically, what makes David trustworthy is the respect he shows towards Charlotte, and his capacity to sympathize with her suffering. Unbeknownst to Charlotte, David is enacting a ritual to ease her stuffing by solving her problems. What is interesting about the solution that David Long settles on is that more than just destroying the people in her life who had wronged her, he shows her his anger about her problems (an anger she did not show), and also calls her out on her bullshit. Confronted with David’s art project she freezes and screams. What she sees alongside the death of her enemies is the beauty of her freedom that always-already existed on the other side of her problems.
David Long Detention final girl Hair Pulling halloween horror Joe Stauffer Kristi Ray Masculinity Philosophy Pieces of Talent rob zombie romance Spit Balls trauma Trust