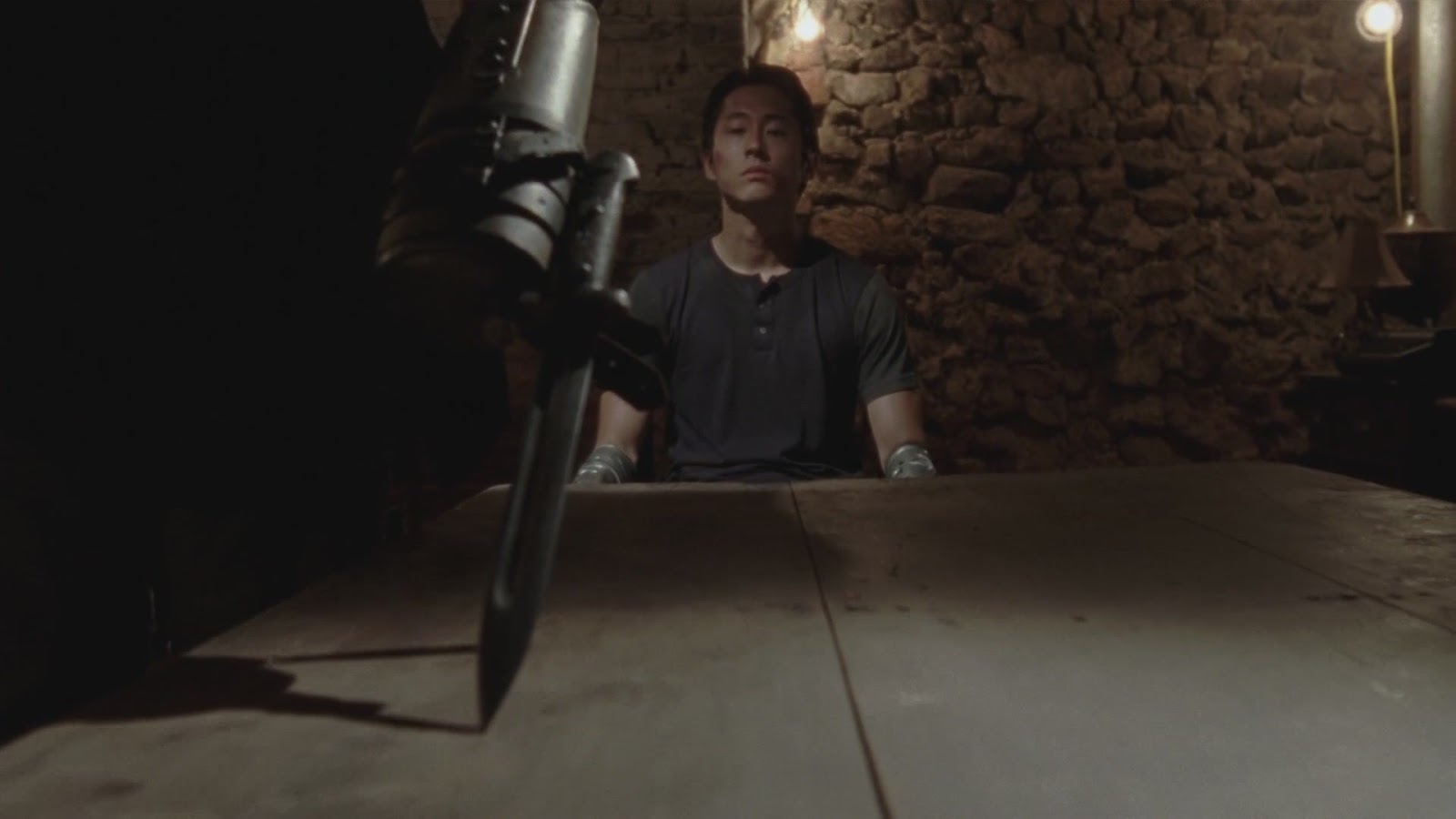 Welcome to our journey into the guts of The Walking Dead. What kind of journey? A philosophical, psychoanalytical and political kind. What I would like to do over the next couple months is dig thought the Walking Dead episode by episode to see what it can teach us. Thank you for following me on this journey. I look forward to reading your comments. Be forewarned: There are spoilers everywhere. Don’t forget to check out my previous post in the Philosophizing TWD series: Philosophizing The Walking Dead S3E5 Hounded, Zombie Ethics and How Many Walkers Have you Killed?

In When The Dead Come Knocking, Glen and Maggie are tortured until they revealed the location of the base camp. Below I plan to interrogate is the methods and strategies used by Merle and The Governor to extract information. The process of interrogation is a strategy used by cops, intelligence operations and governments to extract information from a hostage, suspect or anyone who has information that may foil a potential or present threat. Interrogation opposed to flat out torture is about information.


Historically, torture has had many judicial and religious uses depending on the ideology of the era. During the witch hunts Christians sanctioned by the church would inflict a protocol of pain on an individual in order to gain a confession. But this was more of a false choice, the accused were presumed witches until dead. The goal in this case was to gain information which would retrospectively justify the use of torture. The confession did not just assign guilt, but alleviated the torturer from moral ambiguity. Interrogation on the other hand, does not assume information in the same way. An interrogator may be convinced of an individual’s guilt, but without gaining information which is corroborated or useful the interrogation is a failure. The interrogator’s goal is to gather functional information. An information that can be used to prove guilt of a crime or give a community the ability to act.

Let us saw into Woodbury. Merle has been given the task to extract the location of the group of survivors from Glen and Maggie. The need for this information comes out of an unspoken ideology where Woodbury is seeking military and political domination. Before Rick and company has become a threat The Governor (Like George Bush or his best friend Obama) are using torture as a justification for a preemptive strike. But the information cannot just be of any quality. Because the information must be used to convince or blind (sometimes hand in hand) the American citizenship.

Let us not forget the days and weeks after 9/11 when patriotism was latterly mass produced. The media apparatus regurgitates the party line did everything it could to enrage the populous and funnel their sympathies towards invading Afghanistan. Blinding the national with vengeful righteousness the government was able to easily slide its warmongering into fruition. In a sense The Governor is a lot like a secular George Bush, using fear to support group identification, and out group vilification. The interrogation of Maggie and Glenn are not just an isolated event for to satisfy The Governor’s ego. But a matter of “national security”. Inside the interrogation room Merle escalates his tactics from beating to humiliation. He begins working Glenn over with his fists seeking to use pain to motivate compliance and weaken his ability to control his speech. Pain, stress and sleep deprivation combine to weaken the mind and raise the possibility for information to slip out. Failing to break Glenn, Merle switches to rational argument and threats. Seeking to weaken Glenn’s resistance through fear. Frustrated, Merle lets a zombie loose in the room where Glen is tied to a chair. At the same time Maggie is in the adjacent room overhearing Glenn’s torture. The goal being to weaken Maggie’s capacity to hold on to information by raising her level of stress. All these torture methods are based on the idea that the victim will eventually get to the point where continued pain is a greater negative than giving up information.

The problem with this style of interrogation is that it will only work so long as the enemy is unaware that torture is happening. The moment when the use of torture is leaked hope the capacity to resist torture is heightened. When the nation is known to be a torturer who uses humiliation and torture to meet its goals, then one’s sense of righteous rises to the proportionally to villainy.