Philosophizing The Walking Dead S2E5 Say The Word, The Media Apparatus and Alienation

Welcome to our journey into the guts of The Walking Dead. What kind of journey? A philosophical, psychoanalytical and political kind. What I would like to do over the next couple months is dig thought the Walking Dead episode by episode to see what it can teach us. Thank you for following me on this journey. I look forward to reading your comments. Be forewarned: There are spoilers everywhere. Don’t forget to check out my previous post in the Philosophizing TWD series: Philosophizing The Walking Dead S3E4 Killer With In, Metaphoric Babies, And Lori's Irrational Political Agenda

In Say The Word, we are introduced to the activity that Woodbury uses to blow off steam. The Gladiator-like games pit two residents of the town to fight until incapacitation. The arena is lined circled with a group of zombies chained by their necks to stone blocks. When the fight heats up a stage hand loosens the chains holding the zombies effectively shrinking the combat zone. As the combatants swap blows the crowd cheers on their favorite fighters. The fighters respond in kind by physical displays of ego much like in a World Wresting Entertainment (WWE) match. Using the time where the opponent is knocked to the ground to turn to the crowd to call on them for morale support. The WWE wrestling match and the fights in Woodbury perform the same function. They enlist the masses to celebrate their distraction and alienate audience from the rigged nature of the game.

The spectacle of alienation is a collaborative effort. Audiences invest their leisure time to distraction through their participation and illusion of returned investment. The audience member cheers on the gladiator and misidentifies their participation in raising their fighting intensity. In one sense, this illusion of causality seems to be contradicted by what the audience sees. They see the wrestler acting as if their words had a magical effect on wrestler's performance, compelling him to turn the tides of combat. The consequent and the antecedent appear to be synced. The believability of this faulty logic is made believable by the nature of the event. The nature of entertainment is to get the audience toss of their capacity to think critically in favor of the passive consumption of an entertainment commodity. If the audience were to retain their capacity to think, the magic would be demystified, by knowledge of what is behind the curtain. The staged fight follows a script. The fight’s winners and losers are pre-identified by market researchers whose primary goal is to enlist more viewers into the consumption of a product. The magical moment here when the fan screams and the combatant appear to come under the sway of the voice is pure fabrication. 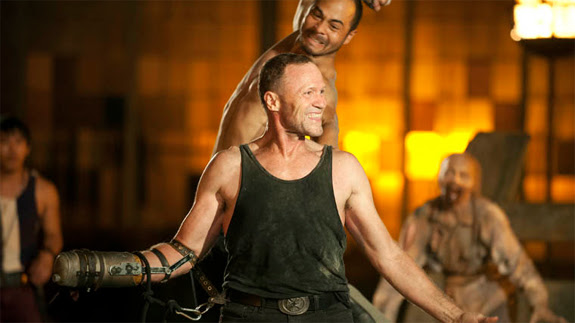 But, unlike media in contemporary capitalism, Woodbury’s fights are not rooted in the market. Tickets are not sold, nor is there any gain financial to the fighters themselves. While the Woodbury fights function fully outside the market, they still function as a social control. The fights at once alienate the audience to their lived reality and the constant threat of being eaten, and contribute to maintaining the Governor’s authority. Alienation and fear play off each other to create the effect of the wrestling match without its ruthless drive for profit. The Woodbury fights reinforce the Governor’s authority by giving credence to the idea that the Governor has control to such an extent that not only can he maintain order, but harness their greatest threat for their entertainment. By pitting the town's warrior class (Merle and the other guy) against each other, the fight also works as a show a military might. The fights are not just entertainment but have an ideological content geared towards reification of the residents leisure time.

The reification works by planning an event that is intentionally serves multiple purposes. Like the WWE, the Woodbury fights structurally act on multiple levels. Wrestling and The Walking Dead are both gears in the media apparatus whose mission is to generate profit above all else. As stated above one of the necessary components of the reproduction of profit is the audience’s self-alienation. The media apparatus does not want to think too hard about its product because the viewer’s critical engagement with it is a product has a tendency to lower profit generation.

Upon realizing the event she is viewing, Andrea (not always the best representative of critical thought) immediately voices her disgust about the fights to The Governor. The Governor counters her suggesting that the games are just for fun.

Where does this need for entertainment originate? And even if there is some authentic human need for entertainment is it worth the risks inherent in incorporating zombies into that entertainment? Notice the Governor’s justification for the Woodbury fights. He appeals to the residents need to be entertained and to use entertainment to blow off steam. As if watching two dudes fight to incapacitation has some transferential effect that opens the valve on collective stress. The Governor here appeals to the fight’s capacity to psychologist vent vicariously through the actors in the rigged spectacle. It is as if to say only through a self-alienation and projection into a lie can a community empty themselves of the tension of their daily lives.