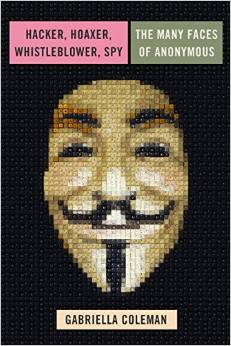 Hacker, Hoaxer, Whistleblower, Spy: The Story of Anonymous by Gabriella Coleman is an anthropological journey into the heart of the masked hacktivists. Rather than a straight forward historical narrative, Gabriella tells her story as she embeds herself in IRC chat rooms, interviews anonymous members and theorizes Anonymous’s organization structure.

Hacker is written from Gabriella’s astute anthropological eye as she interviews anonymous members, and embeds herself in IRC chat rooms as she seeks to understand Anonymous’s culture. The story has many twists and turns that are reminiscent of a spy novel. Gabriella’s ability to break down and explain complex hacking strategies and their political implications puts the reader in the middle of the action as Anonymous rains down the Lulz.

... lulzy activity defies boundaries but also re-erects them. There is a divide between people who are merely LOLing on the Internet-without really know what the Internet is or where it came from or how it works on the inside-and there are those who are lulzing and know exactly what the underbelly is about. (Coleman, 2007)

Unlike the overrated film Hackers, this text discusses the ethical complexity of Anonymous’s political actions. From DDoS attacks on the Church of Scientology to Wikileaks to supporting Arab spring, Gabriella confronts the ethical ramifications, and laying out the power analysis’s anonymous used to plan their attack.

I think what I enjoyed about this book the most is that it filled in another layer of political and internet history. I have followed many of the social movements and revolutions over the last ten years. And each book or documentary tells a story from a specific group or groups. Many of them did not cover the way technology was used to mobilize folks or Anonymous’s role in the events.

I highly recommend this book to anyone curious about Anonymous, looking for creative political ideas, or anyone who would like to know more about the history of the internet. Hacker is a must read for all social justice workers.