All Things Interrogated: Will You Fill Your Bucket With Ice Water Or Rubble? Challenge yourself! 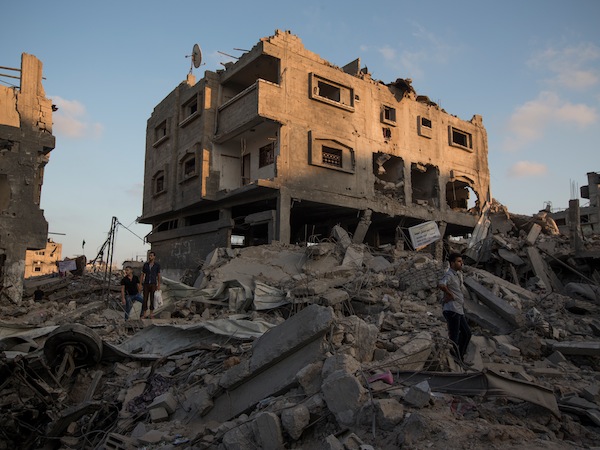 By the time you are reading this your hair may be drenched in freezing cold water. You are in luck! There is a new social-political hair care method. Empty your bucket of any remaining water and fill it with some Palestinian rock dust still warm from a bombing. Raise the buck over your shiny hair, and up turn it! Oh no! Now you are a hot mess. Do you have a spare ice bucket?

Today I caught an article describing one Palestinian Reporter’s cooping of the ALS Ice-bucket challenge. Water, an all too valuable resources in a Palestine even before Israel began its Jihad several weeks ago, was replaced with the rubble of from exploded buildings and dumped on Ayman Aloul’s head. Before the remains of children and homes fell over Ayman I realized how patronizing it may look to see a bunch of American’s (a country supplying the ammunition that created the rubble) dumping water on their head’s while Palestinians are living in a ground zero. I realized that the problem of Awareness is a first world problem. We have become so emancipated from a capacity for empathy that only public cold shower will acknowledge the existence of suffering.

Awareness isn't about knowing that something exists. I know my shoe exists. If I toss my shoe at you, yes, you may become suddenly aware of existential properties of my shoe. But what benefit did you accrue by taking my shoe and tossing it at someone else? Now three of us know about my shoe and we can laugh together about the absurdity! The spectacle is hilarious, that is until it becomes so commonplace that tossing shoes become boring. What then? The world walks around wearing mismatched shoes and nothing changes.

I'm old enough to remember the late 90's when 90% of the emails I received were chain letters. Send this email to 10 people or your heart will stop and you will be run over a car while someone bludgeons you with a baseball bat. Before chain letters showed up in inboxes, they littered mail boxes. Filled with scams and religious gibberish though herd logic and assumed guilt individuals would pass on a message to a set amount of friends. Luckily, email services developed some snazzy spam filters and the chain email fell out of existence.

I'm weary of fads, because I know that, like the most fashionable shoes they won't matter in a month. What the consumer is investing in buying into the fad of the day is an imaginary community. An inauthentic solitary where we all individually contribute minimally, then go back to our lives if nothing happened.

Awareness is about opening up someone's reality to such an extent that living that going back to business as usual is not possible. Nothing is more vital than what happens the day after. It’s easy to donate and drop a bucket of water on your head, but what are you going to do the next day? I am reminded of a quote from Zizek:


When we are shown scenes of starving children in Africa, with a call for us to do something to help them, the underlying ideological message is something like: "Don't think, don't politicize, forget about the true causes of their poverty, just act, contribute money, so that you will not have to think! (Zizek, 2014)

Is not the bucket challenge another collective distraction provoking action where critical discussion and thought should happen? What is the real problem? What is at the very root? When are we going to raise a question about the ratio between the war budget and the medical research budget?

One of the clearest failures of awareness is from the film The Breakfast Club. The mixed mashed group of teen’s bond across identity politics in Saturday detention, and return to school the following Monday as if their new found solidarity never happened.

One step forward, two steps back.