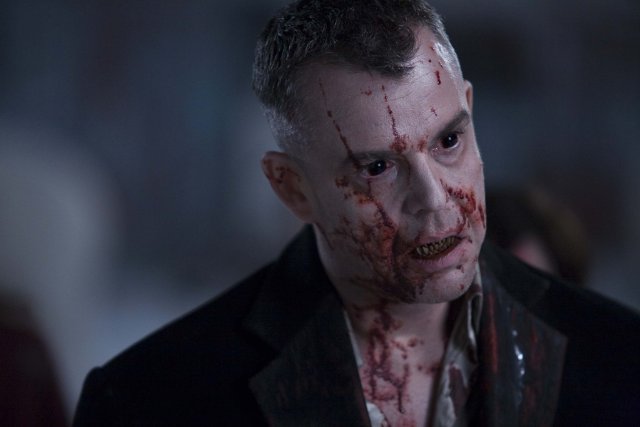 30 Day’s of Night is about the breaking point that snaps Neo-Conservatism opening a flood of terror. The film articulates this snapping point in order to show us that well-meaning conservatives have the capacity to become terrorists when an oppressive force swoops in kills your kill you, and your children. Evolutionary theory tells us that there are two primacy responses to violence. Fight or Flight. Some Palestinian communities freeze in terror immobilized when Israeli bombs explode their schools and children.
Others, fight back with whatever means they have at hand. On the third hand, the Neo-Conservative response cowers between Fight and Flight. Claiming altruism and non-violence in order to avoid conflicts in the means of profit generation. Let’s not be confused, "Altruistic peace” rhetoric is double speak, hiding the violent underbelly of peace for us and violent means the “peaceful” used to control peace.

30 Days Of Night tells the story of a herd of vampires to descend upon Barrow, Alaskanian. The long nights provide the vampires with a happy-magic-land of slaughter and lowering the risk of causalities. The first element of this strategy is sending in a human under the last day of light in order to destroy the towns cell phones, dogs and other lines of communication. Confused and isolated, the vampire’s first target is the town’s power plant. The vampires then use Shock and Awe to quickly overwhelm the town. Eben Olsen (Josh Hartnett), the town's sheriff, collects a group of residents and hatches a plan to hide out the vampires in one of the empty homes. The vampires then launch a series ploys to pull the citizens out to be eaten. Instructing a wounded girl to walk through the streets as they prepare to pounce from the rooftops. The group then uses the whiteout to travel to the head to the store where they find a vaporized girl. After she is decapitated, the film flows into a set of sacrificial gestures.

The first act of terrorism happens when Beau rescues Eben by driving his tractor through the town running over vampires, and shotgun-ing until running into a building and exploding a box of flares. The camera is at a long shot showing the crowd of vampires silhouette-ed against the flames of the exploding building. The target of the self-immolation was not just a diversionary tactic but loaded with spectacle. Beau showed a demonstrated a ruthlessness designed to show the vampires the special stuff that town was made of. A special stuff that should strike fear into the vampires while at the same re-defining as Warriors rather than victims.

In the final act, Stella is trapped under a car with a little girl (covered in blood) who she saved from shambling in the streets, and the vampires are setting the town on fire. As the fire burns, and Stella freezes Eben is watching from the window of an utilidor. Rather than flooding him with hopelessness, Eben infects himself with some vampire blood and confronts the mob of vampires. 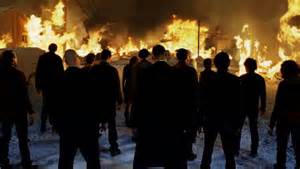 What is interesting about 30 Days Of Night is how authentically it parallels the terroristic spirit of those oppressed by the Shock and Awe campaigns of the United States and Israel. Rather, plummet themselves into political servitude and abandoning their communities, religion and ideologies they pick up guns seeking to overturn their oppressors. Terrorism, like many political-religious terms, have ulterior motives. When used by the those in power it is a way to identify the subaltern’s violence as impure. While, the powerful nation uses torture or bombs to evaporate communities under the guise of nobility. The ideology running through the use of terrorist signifier by the powerful is dependent on mass nationalistic approval. The public's patriotism needs to be sanctified. Enviably, there are those that recognize and saw through the nationalistic rhetoric. Jean Baudrillard stated in The Spirit of Terrorism and Other Essays

Terrorism, like viruses, is everywhere. There is a global perfusion of terrorism, which accompanies any system of domination as though it were its shadow, ready to active itself anywhere, like a double agent (Baudrillard, 2002).

Terrorism in this sense is an intrinsic divergency built into the political power. Even without abuses of state power there is a capacity for rule breakers in every rule set. At the heart of the divergent’s project is a vision for another world outside the system currently in place. The vision of hope, in this sense, is crippling force. An anti-ideology which raises the drive towards the future above continuing the now. But, if terrorism can be a hopeful gesture propelling the future, why do divergents destroy themselves in the process?

The terrorist act can be explained as originating in hope. But a specific kind of hope. A hope that values a community drive towards enacting a presupposed vision more than ones own significance. But in the context of religiosity, the terrorist act, becomes what Albert Camus called metaphysical suicide. The act of metaphysical suicide is an action or ideology that denies the lived reality of the oppressed for transcendental rewards and superficial martyrdom.

The film populates the town of Barrow with a cast of primarily white working class and middle class. The culture of the town is comparable in ideology and structure to a 1950’s small town, but with more snow. Barrow is isolated, but internally connected. Townsfolk know each other by name and say hello, rather than avoid eye contact as they pass each other on the street, like they do in larger cities. Even the outsiders are connected to the town through shared shopping and rumors. What is it about the quality of the town and its residents that push them to Fight rather Flight? Either side of the binary is as likely (but wouldn’t make for an interesting movie if everyone got eaten in 30 minutes and the credits rolled. Or would it?) 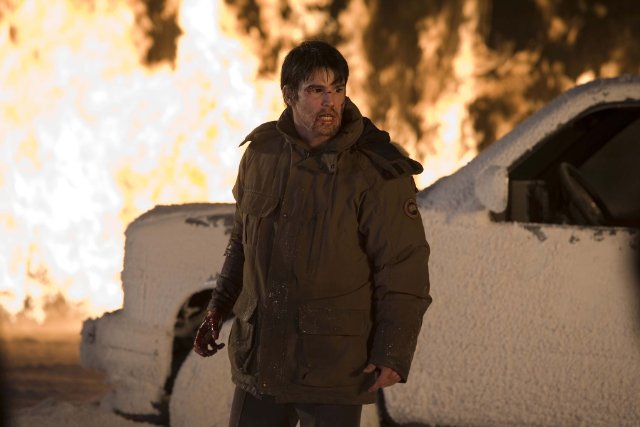 Following Baudrillard, I’d argue that this capacity to revolt towards violence is already included in this Neo-conservative utopia. There is nothing special about Barrow. The terrorist compulsion is always-already include into political apparatus. What makes the Neo-Conservative community quicker to draw violent reactionaries is their worship of guns and weapons of mass destruction. Well-Meaning-Liberals, on the other hand, instinctively cower in non-violence and conflict avoidance. The danger is very real. How is the revolutionary to think outside the reactionarism of neo-liberalism and neo-conservativism. Slavoj Zizek argues


One should oppose the fascination with Hitler, according to which Hitler was, of course, a bad guy, responsible for the death of millions — but he definitely had balls, he pursued with iron will what he wanted. … This point is not only ethically repulsive, but simply wrong: no, Hitler did not ‘have the balls’ to really change things; he did not really act, all his actions were fundamentally reactions, i.e., he acted so that nothing would really change, he stages a big spectacle of Revolution so that the capitalist order could survive. In this precise sense of violence, Gandhi was more violent than Hitler: Gandhi’s movement effectively endeavored to interrupt the basic functioning of the British colonial state (Zizek, 2014).

Which was also turned into a song: