When I caught 28 Days when in theaters, back in the day, I was not disturbed by the pace in which the zombies moved. If zombies ran or walked didn’t matter because the structure and the tension of a zombie narrative was still in the film. Survivors in a post-apocalyptic universe struggling to survive as their friends and family tried to eat their brains.

But, dogmatic fanboy/girls ran (not walked) to the internet to plaster their frustrations. The argument they are not really zombies if they are running, because they don’t fit into the zombie dogma established in the George Romero films. After 28 Days the flood gates open again and a set of films bust onto the scene distorted the zombie to a further extent. Now there are demon zombies (REC), Emo-zombies (Warm Bodies), Alive Zombies (28 Days), Sheep Zombies and everything in between (consult this epic chart). It would appear that zombies have become so multifarious that defining the word zombie has problematic. Has the Post-Modernization of the zombie overwhelmed the concept with too much meaning that it has destroyed its usefulness? Yes and no.

The creatures that George Romero tossed into the world 1968’s Night of the Living Dead were a shambling, hungry for brains, and slow movers. To the hardcore horror fan these became important traits or rules of the zombie movie. But, as far as George Romero was concerned at the time they weren’t zombies, but something more akin to vampires (Kane, 2010). The film is no help here. Night implies that the creatures were infected with radiation from a space probe. This deviated from the historical narratives of zombies in that rather than zombies assuming a soul diaspora they were now mutants. Ironically, what this means is that the iconic zombie that was dogmatically associated with the Night of the Living Dead creatures is incorrect. They weren’t even zombies.

Let’s saw into 28 Days Later. The film begins with activists breaking into an animal testing facility to free the monkey. Unbeknownst to the activists, the experiments tested on the monkeys caused them to rage out. Boom! A monkey gets free, chews on some brains and the film flashes forward to a dude waking up from a coma to a desolate and abandoned London. Let’s look at the making of the zombie.

Akin to A Clockwork Orange, the monkeys were secured to a table and confronted with multiple TV scenes. Each TV played scenes from political protests and war zones. Protesters clashing with police, a city-scapes on fire, and bombs obliterating towns do provoke a viewer’s rage. But, are the individuals on screen act out of rage, or the kind of blind rage that in uncontrollable aggression? Is the war drone operator bombing operational targets acting out of rage? Is the masked protester taunting cops in riot gear out of control? Yes and no.

Rage or anger takes at least two forms in brainwashing videos. There is the blood lust of the cop pummeling a grandmother to death with a baton kind of anger, and the protesters cool and clear rage directed at an oppressor. These two types of rage are very different emotional states. The cop is overcome, past a tipping point, and primal. The protesters ruthless pursuit of justice root in a violation of their values. Stepping back, let’s think about the transference involved in watching rage. 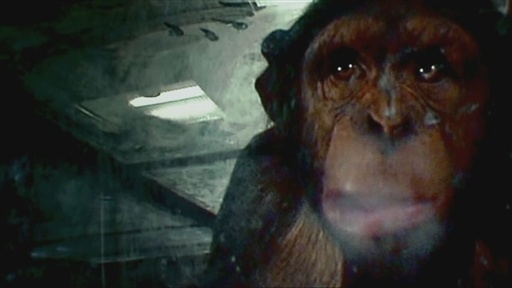 Empathy is a tricky ability. If we do not know a little something about what is going on in a person’s head, or context of something we are seeing then our minds are quick to emotionally rationalize. Finding the quickest answer and identifying as truth is a way our brains have adapted to lower stress by empathy avoidance. While we are feeling the transference the feelings are disconnected from the lived reality of the characters involved in a conflict. Let’s take an example of a priest beating a cop on TV (Manson, 2002). Imagine a priest in a black Cossack straddled over a cop pummeling him in the face. The pink elephant like mode of automatic transference will surge a message into your brain and trigger a set of responses. Whatever emotional reaction that develops will be coded in how you insta-frame the context of a priest beating a cop. Your feelings towards religion, authority figures, and public display of violence will react and shove a set of feelings into your consciousness. Let’s change the context. What if this scene is a televised newscast in South America and the cop unjustly entered a convent and killed a gaggle of nuns. Further, the orders for this massacre were coming direct from coming from the government in order to stifle the Nuns because they were organizing a local sweatshop fight for a living wage. Empathizing with the priest’s rage with this context is a wholly different experience. Sloteredijk argued in Rage and Time: A Political Investigation that

The well-constructed story of rage provides the sublime for the people. It provides the audience with a compact formula for moral if/then relationships even if they pay the price of suspending the slow, formal application of the rule of law in order to practice a quicker form of retaliation. Moreover, rage satisfies the popular interest in acts of which the perpetrator can legitimately be proud: such stories focus on the avengers, who by directly paying back for their humiliation release a part of the discontent with judicial civilization. They provide satisfying proof that the modern person does not always have to travel the windy roads of resentment and steep steps of the judiciary process in order to articulate thymotic emotions. (Sloteredijk, 2014)

Rage is connected with the story you tell yourself about what you are viewing. The narrative framing you provide to the story structures the set of responses you will have. Returning to 28 Days, the monkeys do not have the cognitive apparatus required to authentically empathize with what they are viewing. All conflict is conflict directly wired into fight or flight responses. What is interesting is that when humans are infested with the rage-virus their capacity for empathize rage is foreclosed. It is as if to say that all rage is connected to primal fight or flight reactionarism.

The intertextual zombie story was dogmatically wrapped in the Of The Dead’s. This hegemonic narrative was more about marketing than zombie purity. A zombie movie had to be a zombie that fit into the pop cultural context of a zombie. Familiarity sells. The set of films all banked on the marketing power of a specific kind of Zombie. 28 days chewed through this dogma by capturing the pre/post 9/11 sentiment by ratcheting up the intensity. Hasty zombies and handicam brought the viewer into the film. Contextualizing 28 days like a newscast. Rather than brains, zombies acted like rabid dogs, ready to chew on anything. Brainz were no longer special. 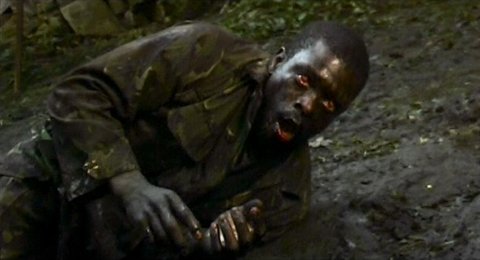 Have zombies lost their meaning? On the one hand, in the post-modern tradition zombies have become deconstructed and generalized to death. The exponentially expanding and self-contradictory types ‘zombie’ diffuse what the word zombie means to the point we can start questioning the merit of calling the creatures in Night zombies. On the other hand, these hermeneutics of blah, blah, blah fail to draw a line in the sand and clearly define the zombie for fear of succumbing to intrinsic failure of language. The relationship between the signifier and signified has slipped. But, if I have a jar of peanut butter, and there is peanut butter in the jar, and the label on the jar says peanut butter. The label and the contexts are in sync. If a dude quacks like a zombie and eats brains like a zombie, then you shut your meat hole and Eat Some Brainz.