Psychoanalytically, associating a cave with the female reproductive system makes sense. Both have structures that have an opening that faces the world, and on the inside there is a wider cavernous space. Descent is haphazardly due to lack of lighting, tight spaces, and winding pathways. There's symbolic mystery attached to both spaces. Cultural horror stories of men getting lost or eaten alive. Both are followed by decades of scientist trying to find the true nature of her depths and failing miserably. Why are these seemingly enticing spaces so alluring? Why do they simultaneously capture our wonder and dread? Lets saw into The Descent, and see what we can find.

The cave opens from the top and the first cave sequence follows the women as they descent into the cave from above. One is reminded of a kind of reverse birth as the woman are entering into a womb via their climbing rope acting as an umbilical cord. Once they all reach the cave floor they excitedly move deeper into the abyss. Striking up flares and using lights on their helmets to break through the darkness. The next path they choice is a tiny hole in which they crawl through one by one. Mimicking the path a fetus takes as it journeys out of the womb. Squeezing near fetal-ly through tight tunnels the last woman becomes stuck in the birth canal. She freaks out and is consulted by her friend until the tunnel gives signs of collapsing to which they quickly make their way into a new opening, unleashing a flurry of rock dust. Now trapped the woman confront the alpha female, Juno, and find out that she has led them into an unexplored cave. Quickly the women get their stuff together and move deeper into the cave. 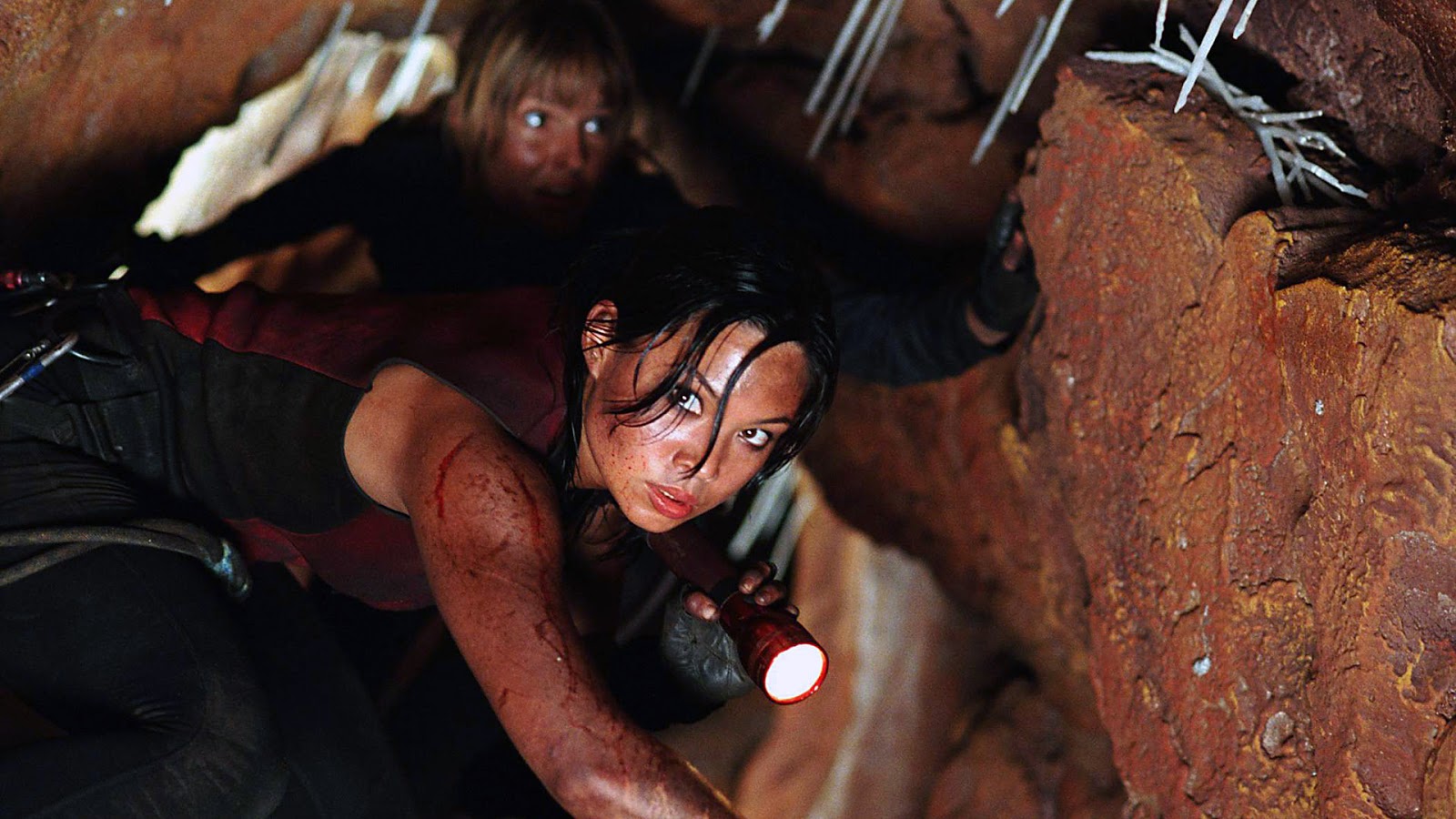 The womb metaphor begs a couple questions. Who is giving birth and who is being born? The film puts a central focus on Sarah by giving her a back story, yet she blends into the rest of the characters until her baptism later in the film. If Sarah is being born again what is the rationale behind her transformation? The Sarah we find at the beginning of the film is another extreme adventure in a set of extreme adventures. The only obvious distinguishing factor that identifies her is that she is a mother and a wife. The conservative message here is a woman who live extreme lifestyles must be some kind of lesbian and do not deserve to have a family. And, the journey she takes into the cave is one in which she is to become the rabid lesbian that matches her lifestyle choice. Although, there is a seance in which this reading fits at least up until Sarah seeks revenge reaffirming her love for her husband and heterosexuality,

Let's saw into Sarah's transformation. There are a couple key scenes that we need to bring into focus. The death of her husband and child left Sarah with a set of reoccurring nightmares. The nightmares take two forms; one in which her child is presenting her with a birthday cake, and ones in which she is being killed in a similar fashion as her husband. Psychoanalytically, we can view the return to another extreme adventure as confronting this trauma. Confronting this trigger associating the death of her family with her extreme lifestyle fits may help support Sarah moving past the tragedy in order to be a more functioning adult. Now of course this is a horror movie and rarely does the plot service psychoanalytic breakthroughs, so when Sarah is separated from the group and is forced to become instantaneously self sufficient she is made aware via a necklace that Juno had been bumping dirties with her husband.

Let's saw back into the opening scene. As the women are moving towards land upon completing their journey down the rapids, Juno stands up and cheers and Sarah uses a paddle to push Juno into the river. Sarah's husband helps his love out of the water, and she comments that she is freezing. The husband is mind is then flooding with concern for his lover as he is driving the family back and looses control of the car. So when Sarah is made aware of the affair between her husband and Juno, a new variable is let loose into how she understood the events that traumatized her and led to the death of her family. Clicking into her rage, Sarah finds a deep rooted will to survive in order to confront and let loose her anger on Juno. 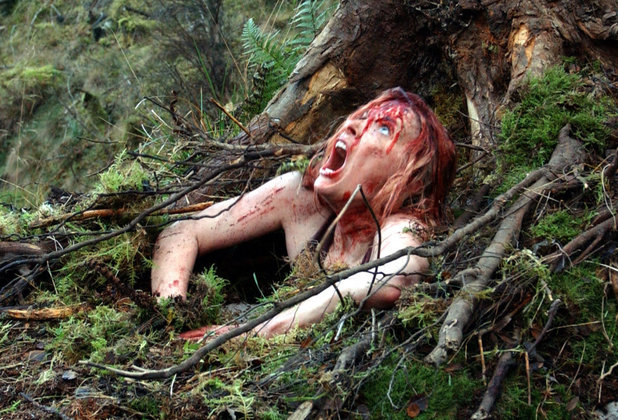 So, there is a transformation from trauma to rage and ruthless survival-ism. A return to a more primal state where reason is absent and emotions ripple actions into reality. The journey Sarah takes could be seen as a de-transcendence from human to monster, not unlike the creatures that live in the caves. The is a clear moment that echos a the visceral scene from Carrie where she is covered in pigs blood and eyes wide full of rage. Sarah's baptism by blood here symbolizes this inverted transcendence to pure reactionary state fueled by instinct. On another hand, I am reminded of the opening of Nietzsche's text Daybreak where he describes his path and methodology of philosophizing as a journey into the depths undermining (who one is and who society things it is) and eventually coming to a daybreak (becoming something new). Is this not Sarah's journey The Descent? From murky and lost to clarity one can only see after one has spent some time in the dark with ones own pain?


In [The Descent] you will discover a 'subterranean [woman]'  at work, one who tunnels and mines and undermines. You will see [her]  - presupposing you have eyes capable of seeing this work in the depths - going forward slowly, cautiously, gently inexorably, with out betraying very much of the distress which any protracted deprivation of light and air must entail; you might even call [her] contented, working there in the dark. Does it not seem as though some faith were leading [her]  on, some consolation offering [her] compensation? As though [she] perhaps desires this prolonged obscurity, desires to be incomprehensible, concealed, enigmatic, because [she] knows what [she] will there by also acquire: [her] own morning, [her] own redemption, [her] own daybreak?... down there [she] will tell you [herself] of [her] own accord, this seeming Trophonious and subterranean, as soon as [she] has 'become a [woman]' again. Nietzsche - Daybreak (P.1)