During the 80's a slew of masculine women were thrown into the plots of action, horror, science fiction movies. Many conformed to the trend set in place by Ripley in Alien and it sequels. But what attributes force Ripley to stand out? Is she really presenting a version of femininity that provides a more authentic vision of what how a woman would be in similar situations?

As the crew of the Nostromo wakes up and falls into their roles running the ship we are welcomed into the familiar comradery commonly found in the military. The crew jokes among at each other yet are kept in check by their awareness hierarchy and rules. A strict chain of command and division of labor is followed keeping regulating peoples roles and social interaction. Ripley is warrant office without an identifiable role. The first time she is allotted the authority she is put in charge of the ship when the a team lead by the captain goes out to investigate the signal. When the crew returns with an alien attached to one of the crew member's faces, Ripley refuses to let them on board due to quarantine protocol. The science officer steps in and opens the door, usurping her command.

It is important to note that the science officer's (Ash) turns out to be a cyborg who was programmed with a set of orders that different from the crew. So when the Ash, manual overrides the door and lets the crew in he is acting out of a set of protocols coded into the underbelly of the companies bureaucracy. Cyborgs unlike human's are working on a set of coding that they cannot deviate from. So while Ash usurped her authority surrounding keeping the quarantine, it was not because she was a female that he was able to disregard her orders. On the other hand, the company (if its keeping to the general trends of capitalism) has a high probability of being led by wealthy white heterosexual men who are seeking to promote the profit motive at all costs. The profit motive in this sense is not a wholly ungendered affair. Ripley presents a character who fits the archetype of women in the military. Ripley is not presenting a feminist usurping of the masculine ideology, rather she is fully conformed to the military discourse. A hyper-masculine women in a culture created and reinforced by the masculine ethos. 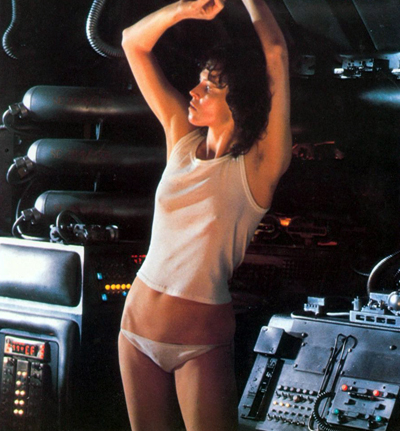 In contrast to Ripley's masculinity, the alien's and the alien spaceship flood the flip with feminine imagery calling our attention to the birth. orifices, dampness, dripping, and transformation. The room full of eggs shows us a hardcore femininity wholly engaged in her project of reproduction. What is interesting is how the Alien's show not just female reproductive strategies. The eggs hatch sperm like creatures that attach themselves to a host turning that host into a cocoon to be digested and eviscerated. At the same time, the reproductive cycle is hypersexualized the final realized alien is an unsexed creature who kills indiscriminately without purpose.

Quickly everyone dies, leaving Ripley to fend for herself. She makes her way to escape shuttle, and strips in order to get ready for hyper-sleep. But the Alien has snuck on board, and Ripley hatches a wild scheme to get the Alien off the ship. She opens the hatches and used a grappling hook to push the Alien into space. But when the door closes it catches the line and the tethering the Alien to the ship. Does this scene not reenact a kind of birth? The alien is tossed violently into space and held tightly to her mother by an umbilical cord.