Sympathy For Mr. Vengeance, Poverty, Anarchism, And Becoming What You Already Are 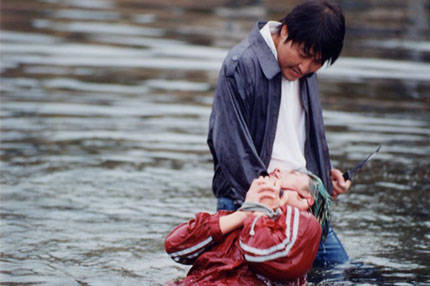 Characters in horror movies make a lot of choices. Many of those choices are stupid. In a horror movie, when confronted with running upstairs or running into the basement a not-so-final-girl may restructure her choices strictly to what she sees. Even if the masked man with the chainsaw is about to chop off her thighs for dinner, her perception of choice is restricted to her perception of opportunity. Fear may be part of the rationale behind limiting a character's choice between two bad options, but it is also a way for the director to show you that a character in a film isn't particularly creative. Nonetheless, the choices characters make in the context of their situation define who they are and sometimes who they already are in the face of their freedom.

Ryu's sister is dying, and the hospital has put her on a wait-list. Fearful that she might die while waiting Ryu contacts a group on the black market to remove his liver in order so they can provide him a liver of the right blood type for his sister. The group removes his liver and his money and leaves him naked. The hospital contacts Ryu and informs him that they have just acquired a liver for his sister. Ryu now broke, is confronted with a situation where he is unable to afford the surgery. Enlisting his Anarcho-Communist girlfriend to help him out, they hatch a plan to kidnap Ryu's boss's daughter and hold her for ransom. All goes as planned until Ryu's sister finds out that she has been babysitting a kidnapped child and kills herself. Ryu's other important character trait is that he is deaf and mute, so when he is burying his sister with rocks near a lake, he doesn't notice his hostage fall into the river and drown. Vengeful he turns his anger on the organ harvesting group. And at this point the point of view for the story shifts to the kidnapped girl’s father as he hunts down Ryu and his girlfriend. Ryu kills and eats the livers of the organ harvesters and falls into the father trap. The father drowns Ryu in the same river his daughter drowns in. The revolutionary anarchistic then catches up with the father as he is digging a hole to deposit chunks of Ryu in and stabs him in the chest. The film fades to black and confronts us with the question, "Who are we supposed to have sympathy for?"

Sympathy is an emotion that is wrapped around the concept of understanding and sharing the sorrow of others. Ryu's motivation for his behavior is rooted in the alleviation of his sister's suffering and desire to prolong her life. There is a strange and revealing scene when the sister is introduced where we are lead to believe that Ryu's sister is being kept awake by the sex making noises of neighbors. The subtitles clue us into Ryu's thoughts that the landlords must have thought he wouldn't mind the apartment because he was deaf. The camera pans through the walls to a group of boys who are eagerly listening to the panting noises on the other side of the wall. Cutting back to the room, we find that Ryu's is the cause of the noises. The moaning and crying isn't a symptom of sex, but of the sister’s agony caused by her faulty organs. The viewer, of course, like the boys in the apartment next door, are caught with their minds in the gutter of false empathy. The result is that we find yourself confronted by the contrasting thoughts of sexual bliss vs suffering unto death. What the scene teaches is that a sympathy in so far it is a transcendental connection between the viewer and the character on screen is an intrinsically phantasmagorical. It is only retrospectively that we can confirm the authenticity of our perceived sympathy.

Yet, at both ends of this scene presuppose a choice on the viewers end. What we miss-perceive when we are wrapped into narrative presented at the beginning of the scene and at the end of the scene is that both perspectives were an equally valid option at the beginning of the scene. There is nothing intrinsic about a woman's cry that nail down their meaning to ecstasy or suffering (or any other variable in between). The truth of our perspective as a viewer of a film is rooted in the god-like perspective we take as a viewer of events. A third party "objectively" taking in the interaction of characters and dialog. What get's lost in this god perspective is that the outside-third-party observer is already included into the story as a character by the director. The clue to this is the trick of this scene (and by extension the emotional trick of the whole film) is wrapped up into the emotional probability that a viewer will take on one or another system of meaning in relation to a scene.

So who is deserving of our sympathy? There is a set of three sequences that position the camera in first person-ish perspective and have hand's jutting out in front of or towards a character. The first is when Ryu is fired. After Ryu signs the 'you are fired' documents, the guy who fired him lifts his hand in order to shake Ruy's hand. The camera freezes on this moment where there is a hand is presented to Ryu and he is considering his options. The second scene is when Ryu is seeking to trade a necklace for the hostage's doll. The little girl (hostage) holds the doll and a necklace in her hands pondering between the two. The third scene is after the father has killed Ryu and has been stabled by the anarchist group. He looks down at his hands. One hand has a scar across the palm from when he tried to disarm a hostile employ with the knife earlier in the film and the other palm is newly cut and bleeding.

The first and the third scene the hands or the choices are already completed. Ryu was already fired, before he was presented with the opportunity to shake his boss's hand. Shaking the boss's hand after he was fired would only take demonstrate a false sympathy with his employer. As if there was no harm, no foul that would come into his life upon losing his main source of employment was taken from him. Of course, the opposite is the case, getting fired rubbed fish guts in the already infected wound relating to his inability to pay for his sisters surgery due to his poor judgment. The third scene presents a bloody hand opposed to a scarred hand. The imagery here confronts the viewer with the metaphysics of the wound, and a set of coulda-shoulda-woulda choices. If only he had learned from the initial attempt on his life to treat his employees with dignity maybe they wouldn't be coming after him again.

Conforming your sense of self, of the choices already made and accepting that the path chosen was the one that confirmed who the father already was. The middle choice between the doll and the necklace presents a more difficult puzzle, yet also affirms clearly what was missing from the subjectivity of Ryu and the father. The hostage, the little girl, who was yanked from her normal life and pulled into a plot. The choice between the doll and the necklace is a clear choice between what she likes better. But we as the viewer, of course, know that the choice is more than what it appears to be on the surface. The hostage's choice was structured, by Ryu. Ryu was presenting her with a selection of choices that restricted her freedom to two narrow options. Like the hostage, Ryu and the father was not fully aware of the ramifications of their choices, or rather they were not included in the structure which structured their choice of opportunities; poverty and anarchism.