Sympathy For Lady Vengeance, Tofu All Up In The Face and Organizing For Vengeance

What is vengeance? Reparation or ego? When a wrong is committed and individual is harmed most bring their problems to the legal system in order to seek reimbursement and/or justice. The court’s ruling is enough for the average person. After the hammer falls justice is hashed out. The parties involved may feel slighted, yet they shake hands and go about their lives. What kind of crimes or slights against the social contract opens up the field for DIY justice? Vengeance in this sense is akin to the justice one may receive through the courts, but is rooted in the righteous declaration that the individual righteousness to judge and deal out justice. What gives an individual the right to create justice?

Let’s take a step back and saw off a different chunk. What justifies the authority of a judge in a courtroom? While the judge’s seat might provide her the highest point from which to look into the courtroom, there is nothing intrinsic about this perspective that authenticates that a judge’s justice is closer to the truth than anyone else. At base is a series of documents that support and discipline a system in which defined what is and is not just I.E. Laws. What about these laws give them the right to dictate justice? Laws come out of the need in a community or group of people to establish social contracts that regulate order. The order laws create and discipline comes out of the written desires (policies) which are brought to the community of voters to be signed into the law. The ratification of a law gives enforcers of a law the jurisdiction and rights to enforce a community's desires.

In Sympathy for Lady Vengeance, Ms. Geum-ja (Yeong-ae Lee) Lee got trapped in the state's bureaucracy. What had happened was... Geuma-ja was acting like an average teenage girl; got pregnant and manipulated into confessing to a murder she did not commit by a man who has kidnapped her daughter. While in prison Geuma-ja begins forming relationships with prisoners, administration, and a priest in garner support for her vengeance plan. Geuma-ja starts by winning over several prisoners by taking care of a bully in the prison. First she soaps up the floor in the bathroom so that the bully can fall, then later, while the bully is recuperating in medical we find out that Geuma-ja had been feeding the her bleach. There is a great scene where Geuma-ja is between spoon feeding the bully and the large woman belches in Geuma-ja's face. For a moment, we are left with the impression that Geuma-ja is on the very verge of snapping (possibly sporking her to death) until she takes a deep breath and forms a smile.

The other important relationship Geuma-ja creates during her time in prison is with a priest. Geuma-ja convinces the priest that she has become born again. The priest becomes enraptured by her new found Christian-ness All the while she is manipulating him in order to secure and early release. In quirky scene, Geuma-ja is exiting the prison and confronted by the priest. The priest is holding a plate of tofu, and behind him carols an entourage of Christians dressed in Santa clause costumes. Geuma-ja tips over the plate of tofu and it tumbles to the earth. The priest and his hommies cringe and Geuma-ja responds by saying, “Why don't you go screw yourself?”, and walks onto her vengeance.

The interesting aspect of Sympathy For Lady Vengeance is Geuma-ja journey from ego based vengeance to a generalized collective vengeance. Geuma-ja quickly gets the upper hand on the man who kidnapped her child and forced her into a decade of imprisonment. Just as she is about to shoot him she uncovers his cell phone and the string of charms attached to it. At this moment, she realizes that the murder did not just kill one child but several children. Her vengeance is bigger than just herself now. She contacts the parents of the murdered children and organizes a meeting where she shows each of them the video recording of their child’s deaths. Geuma-ja provides the ad-hoc PTA meeting with a set of options. They can either let the justice system take care of the murder or they can carve their own vengeance on murders face personally. The parents pick the fun option.

What then is the justice that vengeance appeals to? Of what use is torturing a murder to a sense of justice? What is the difference between if Geuma-ja killed, the murder herself or if the parents kill the murder? There is a sense in which the laws and social contracts aren't prepared to handle radical evil. Most laws are set to regulate the common; I.E. Traffic tickets, and gas station robberies. Serial child murders don't fit into justice. The key evidence is that convictions for such crime can be imprisonment in excess of the time in which a person could live. This signals towards inscribing the sentenced as penalized beyond reality. In other words, the added time adds only meaning to the punishment. The kind of meaning that is self-contradictory. What does this say about social justice when the legal system seeks to deal beyond reality in order to find a way to balance out social contracts?

The vengeance Geuma-ja seeks at the outset of the film is one in which satisfies her egotistical desire for reparations for being robbed of her daughter and spending a decade in prison. At the end of the film she has generalized her sense of anger, empathizing others into the fold. Geuma-ja organized two groups of people through the film. In prison, she acquires a set of relationships in order to secure early release and help her on her revenge. When confronted with the scale of the murder's evil, she collects a new set of relationships out of a strict sense of sympathy- Geuma-ja wants to alleviate their suffering.

At the very end of the film, Geuma-ja is walking back home tailed by her barely legal lover and carrying a giant plate of tofu. Geuma-ja unwraps the tofu and smashes her face into the tofu brick. Her lover explodes a quizzical expression on his face, and her daughter hugs her at the waist. So what is going on with the tofu? The key here is in the early scene where the priest explains to Geuma-ja that tofu is the traditional delicacy for those who have just been freed from prison. The prison Geuma-ja was released from by the end of the movie was the prison of her own sense of vengeance. 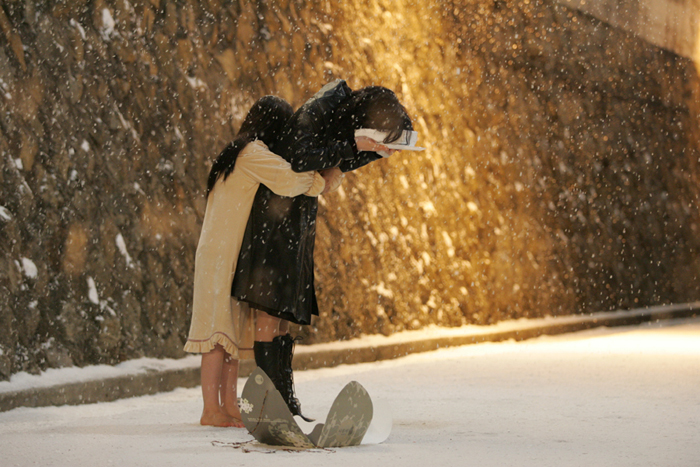