Interrogating: Playing The Whore: The Work of Sex Work By Melissa Gira Grant 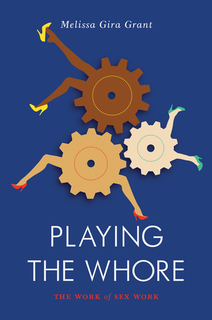 If you want to aim for justice and aim your political critiques towards the likable jobs and away from the less morally clear jobs you are acting like a social worker who a lots help to the deserving poor rather than the poor in a general sense. Melissa Grant's text Playing The Whore: The Work of Sex work seeks to suture the gap in leftist critique for the traditionally unmentionable; whores, prostitutes, strippers, and so on. By tackling the sex trade, Gran seeks to deconstruct the lines of oppression and ideological mystification.

Playing the whole is organized topically across several perspectives and professions and their relation to the sex trade. Grant begins promptly with police for and historical creation of the illegality of prostitution. Grant sufficiently presents an overview and appears to hit all the right stops. What was missing for me was the depth in the study of sex work. I would have liked to see a deeper look into each of the fields of study covered in the text. I can say that Grant has sufficiently sparked my interest in sex work studies, and I may be pursuing some of the references she mentioned in the Playing The Whore.

So often in telling sex work stories, the story telling process is a form of striptease indistinguishable from sex work itself, a demand to create a satisfying revealing story, for audiences whose interest is disguised as compassion or curiosity (Grant, LOC 422)

The chapter that stood out to me was The Savors. In the chapter, Grant laid out an argument against he well meaning liberal business of awareness raising. Awareness raising is flawed in that is re-frames the problems of sex work as problems of information and education rather than political struggle. The problem here is two-fold; awareness raising creates a business of awareness that cycles and re-cycles people through information, and obfuscates the necessity for political action. One of my favorite sex work political actions was from several years ago when a group of strippers who got fed up with a church protesting their place of business stomped down to the front of the church and set up shop with bikini's and lawn chairs.