Grotesque (2009) And Supposing Truth Was A Man In Love - What then? 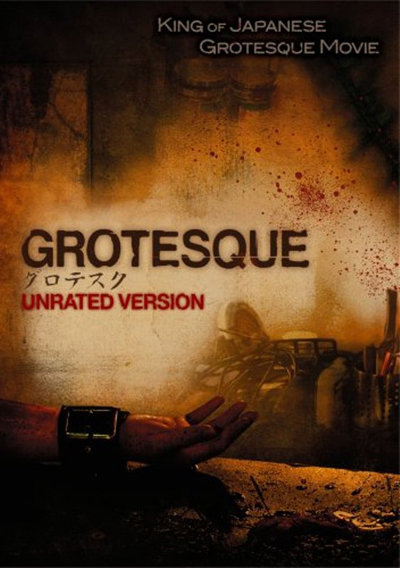 Philosophers have struggled with love. Nietzsche ominously began Beyond Good and Evil with the line, "Supposing truth is a woman - what then?" In what follows Nietzsche describes the flaying attempts of previous philosophers to seduce truth. What then must woman be if she is something to be seduced? A center of mystery devoid of easily rationality? The presupposition involved in the seduce-ability of femininity and/or truth lies in the idea that there is a hard kernel of truth to be discovered like a toy in a cereal box. Nietzsche grievance here is with the dogmatism involved in assuming the existence of transcendental truths creates a style of philosophizing that bars assess to idea that behind truth and/or femininity that only a dark void filled out with our own fictionalizations exists.

Grotesque is a film that captures this void where truths are created in order to avoid the unbearable idea that behind the surface of meaning there is no guarantee. We are introduced to Kazuo and Aki as they are leaving their first date and being stalked by a man in a white van. The man approached the couple, knocks them unconscious and takes them to his torture chamber, where he ties Kazuo and Aki to separate horizontal slabs. The man describes to the couple that he gets his kicks when people show their desire to survive, and that if he is sufficiently pleased with their effort he will let them go.

The game is quickly made clear. The man explains that as long as Kazuo is able to maintain being tortured, he will not turn his tools upon Aki. One factor to keep in mind is that via a set of flashbacks we are made aware that Kazuo has been crushing on Aki for a significant length of time before he worked up the courage to ask Aki on a date, and Aki has expressed her (rightful) hesitance to commit to Kazuo's advances. There is a great sequence where the man threatens to move his torture from Kazuo to Aki and we were confronted with Aki's clear inability to sacrifice herself for Kazuo. The lack of mutuality puts Kazuo into the position of a false martyr, this is made doubly clear due to the chunk of anatomy that is being tortured effectively throws their relationship into impotence.

In the climactic scene, Kazuo is confronted with an impossible task to cross the room and free Aki. The catch is that in doing so he will lose his guts in the process. As Kazuo crosses the room the man cheers him on. Like a football coach to an underperforming athlete. The symmetry provides an interesting gaze into heterosexual masculinity. Dudes chase after chicks, throwing everything into the cause of winning a chicks affection. The process takes a constant willingness to be courageous in the face of rejection. The greatness of the scene is that it reverses this romantic matrix. As the Kazuo throws himself upon the task of winning Aki's freedom he is losing his guts in the process. The implication is that sacrificing oneself for a girl is not an act of courage, but a desperate rush of masculinity.

Let's saw into the dynamics in the couple’s relationship. As stated above, Kazuo and Aki feelings towards each other are no balance. Aki just isn't into him. After Kazuo's man parts are rendered irrelevant, the man is satisfied with the demonstration of their will to survive and carts the couple into a makeshift hospital room, where he treats their wounds. During this time, Aki and Kazuo discuss their experiences being tortured and skepticism about the promise of freedom. The man drugs the couple and they find themselves confronting each other on the slabs once more. But their relationship has changed, Aki has confessed her desire to be in a relationship with Kazuo, which in turn reinforces Kazuo's dedication to his original inclinations. Is this love?

Love is commonly used to describe the barren landscape between two people. Love is the symbolism, memory and meaning that a couple uses to suture the void between each other. The void is the real of the relationship that defies inscription. No matter how much energy and story we throw into our relationships, there is always a false bottom to our affections. If love is interrogated it always cracks. The trick is to be mindful about the nothingness intrinsic to our structures of meaning, and toss ourselves into the absurdity clinging to our very human truth. So what is truth? Truth is meaning we irrationally cling to when confronted with the horror of reality.