I give two strains of advice to my friends who are parents dealing with unruly children. First, you are so much smarter than them you can trick them. As long as you keep focused on how stupid your kids are, the easier it is to out maneuver them, don't let those little idiots outsmart you! Second, (and this depends on what the kid is doing) I suggest their child might be developing a political persona. If your kid is playing with her food or throwing crayons at their teacher, then it’s important for a parent to realize their child's gift; anarchism! Confessions is a slick film about a teacher who has become fed up with her students after kids in her class kill her daughter.

What is wrong with the youth of today? Have they become inoculated to the education and authority of adults? Or were adults rendered powerless by complex bureaucratic systems intended to protect children? Yuko Moriguchi's main argument here is the former. The case she makes is that because children are free from the responsibility they can get away with murder (specifically the murder of her child). She argues that the juvenile system which was created to protect children's rights now protects their illegality. At what age does responsibility for one's actions begin or end?

Ms. Moriguchi hatches a rather ingenious plan that bets upon the stupidity of her class of students. She begins by telling a story, in order to frame the justification for her lie. Initially, the children couldn't care less, but then are pulled into the story as Ms. Moriguchi reveals some dark secrets of some students. With the class's full attention, she tells the story of her daughter’s murder that was 'deemed' accidentally by the police. By the end of the story the class has put two and two together and realized who among them are the murders. The clinch here is Ms. Moriguchi has poisoned the two murders milk with her husband’s HIV positive blood. At this point the film splits off from the classroom and tell the story of the events leading up to the classroom confession as well as afterwards from multiple perspectives.

Now that the murders are outed, child B student psychologically snaps and refuses to leave his home. This drives his mother nuts, which collide with her knowledge of the child's possible HIV infection. The mother decided to kill her son, but this backfires and the son turns on the mother. Child A is still in school, but his classmates have turned against him. At the same time, Ms. Moriguchi who has been removed from the school is orchestrating events so both of the boy’s lives become more difficult.

What is interesting here is the film's capacity to fillet the dark side of human nature, and take us on a journey into the psychology of failed youth. The narrativizing of the children's version of events seeks to release the children from the responsibility of their actions, shifting the burden to poor parenting. We find that child A's personal motivation is rooted in his desire for attention which is grounded in his relationship with his mother. His mother was a genius electrician who sought to pass along her talents to her son, but when he was unable to meet her expectations she became verbally and physically abusive. Child A's parents divorced and left him with an unfulfilled need to gain his mother's approval. 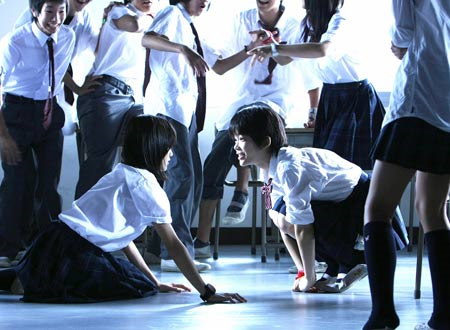 Is a mother's abandonment of her child a strong enough rationalization to justify that Child A's mother is responsible for his subjectivity? There are a number of responses that a child can make to the loss of a parent. Some become angry, sad, frustrated, happy or any other emotional mixture. The mother abandoning child A does not dictate a moral causality. There is no truth in the moment of a mother’s abandonment. Nothing is at the base of the event. A child is confronted with raw freedom, and freedom of this kind is traumatic in its very nature. It rips through and ripples long held systems of meaning that symbolically locate one's self as a child in a family with a mother. While seemly simple connections the mother to child relationship is infused with socialital meaning that perpetually embedded into a collective meaning. All normal children have two parents. The divorce, and thereby abandonment of by mother called all here to meaning in child A's life into question. In order to defragment his subjectivity, he spun a new narrative that put him in the place of a victim seeking the deserved attention from his mother.

What trauma presents us with is a moment in which we have the opportunity to restructure the choices we choose among. In that moment where intersubjective meaning is sawed to chunks the story we tell our self to our self is thrown to freedom. The moments that make us who we are, our memories, our future expectations, and what we are to ourselves can be reassigned a wholly new network of meaning. For child A, this happened instantaneously, confronted with the possibility of being HIV positive, he dived fully into guilt and self-pity reconstructing his life as an unjust malicious aggressor deserving of self-torment. Child A on the other-hand, clung firm his original victimhood at the hands of his mother, and rationalized an HIV status as a way to gain the attention of his mother. Ms. Moriguchi caught on to child A's Oedipus complex and relocated the bomb he was going to use to blow himself during the graduation speech to under his mother's desk. This cornered child A to confront the abyss of his actions. Who is to blame for the youth of today? I think it might be a good time to stop obfuscating the issue and grounding the territory for debate between school and parents. The youth of today is to blame for the youth of today, and not in that Tea Party way where they just need to pull themselves up by their bootstraps. The youth of today is intentionally becoming and renewing their commitment to cruelty. Committed wholeheartedly to nihilism wrapped in superficiality and pop bands. Unlike, previous generations that may have been ill-informed about the impact of their actions on the world and on others, the youth of today has no excuse. They are fully aware of the horrors that are embedded in their words and deeds, and yet they choose to add terror into the world as if it was a noble truth.
2010 Asian Horror choice Confessions Education existentialism horror Kanae Minato Kokuhaku Moriguchi Nihilism Oedipus Complex Philosophy School Tetsuya Nakashima