The 'Burbs (1989), The Reproduction Of Systemic Racism, and White Suburbanites 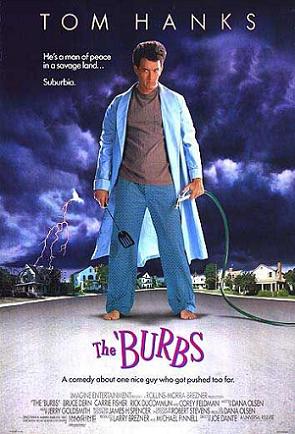 The “First Suburbs” were created outside industrialized cities in order to weaken unions and soften the class consciousness of the worker. Outside of Chicago, one of the first suburbs in this country was Chicago Heights. With the first unions came the geographical widening of the division of labor. Corporate interests were taken care of in Chicago while factory labor was related to the suburbs. Workers, rather than working and living together cramped tightly into cities, were allocated to the first suburban homes. Suburban living provided workers with a widening and deepening of their economic and social private life. For the first time, workers not just worked all day and then slept. Now, workers worked all day and came home to wives (who had been working in the home) and now had a significant amount of leisure time and energy. Leisure time was filled in with proscribed market activities; listening to the radio, community and church, and sports. Immediately, workers became invested in the manufactured self-esteem embedded in owning stuff.

As whites flooded out of the city to suburban communities, blacks were migrating from the south seeking work in northern cities, like Chicago. The once white communities were quickly changing color and escalating white flight. In conjunction with white flight, white business and stakeholders disinvested and left communities. The black ghettoization went into effect. Communities lacking legal access to resources began finding other means of survival. Some clung to the many churches that were being formed, others formed gangs, and the rich were the first African American's to move into the suburbs.

In South Suburban College there is a hallway that displays a set of black and white photos dating back to the homogeneous white residents of the first suburbs. The class conflict here is that the communities in these photos have been transformed by poverty, and the students who attend the school are not racially proportional to the families and homes represented in the photos. When I saw the photos for the first time my first counter-protest idea was to line the area around the photos with the thousands of abandoned and boarded up homes that sprinkle these communities. The lesson here is that segregation is always desegregation. Or as Louis Althusser may have put it the production of systemic racism is always-already the reproduction of systemic racism. The point here is not that systemic racism is following a historical pattern, but that the historical pattern of systemic racism has a vested interest in its continuance and reproduction into the coming generations. 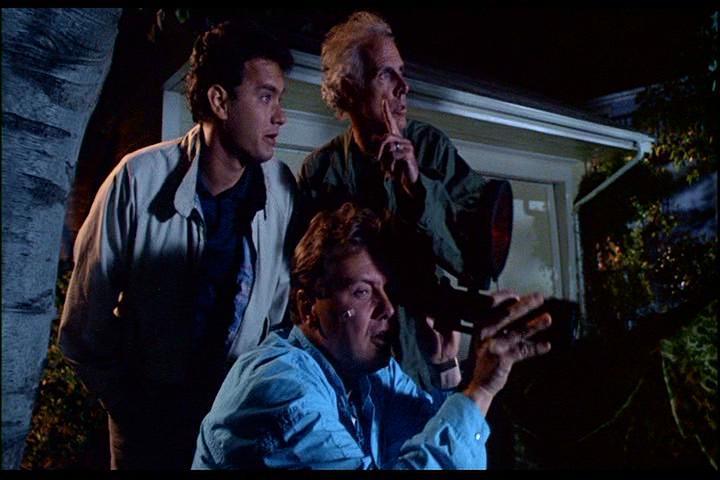 Enter the rather wacky film The 'Burbs about a paranoid community with historical amnesia that terrorizes the one house on the block that is different. The film starts out creepily enough when a bored Ray (Tom Hanks) hears a noise in the middle of the night and comes stomping out of the house in his Pajamas. He crosses his yard and looks up to the creepy house next door where he is accosted by the wind. The next morning he is confronted with a montage introducing the neighbors in the community and suburban culture. Each neighbor has been caught in a tense relationship with each other, where they are overly concerned with the activities of their neighbors, yet at the same time are seeking to maintain a strict distance from them.
Immediately we are confronted with the strange quirks of the male characters living in the burbs (The female characters weren't deemed important enough to be given character traits, other than nagging men and seeking to control their freedom.) Ray is a guy that is on a week vacation from work and just wants to lounge around the house in his PJs. Rumsfield (Bruce Dern) is a weird token Vietnam Vet. Ricky Butler (Corey Feldman) is a metal head punk that appears to be living alone. Art is the resident psychotic and trouble maker who is introduced chasing a crow with a rifle through the back yards of his neighbors.

What is the spectacle of the creepy home and why does it capture these suburban men's curiosities? What is their great sin? The single trait that the 'othered' family has that the rest of the suburbanites do not have is that they are protecting their privacy, while the rest of the suburbanites are shamelessly shoving their weirdness into the public space to be viewed by others. The suburbanites immediately being building a fictitious narrative built around pseudo-clues. After watching the creepy neighbors drive their car from their garage to the end of the driveway in order to take out the trash (and stab the trash into the garbage can with a garden hoe) the group of men get braver and begin to systematically invade the space of the creepy family, up to eventually break into the home and setting it on fire.

Now let's put The 'Burbs into a historical perspective. The film begins when that first 'other' migrates to the suburbs, seeking employment they can't find elsewhere. Another white person moving into the community seeking privacy would have been respected in a way the eastern Europeans that lived in the creepy home would not. Imagine being that first black or Latino/a moving into an all-white suburbs in the 60's or 70's. Eyes would be upon you as got in your car in the morning to go to work. As you mowed your lawn, neighbors walking their dogs would avoid eye contact or saying hello. The danger in The 'Burbs is that the film obfuscates the hate crime with comedy, yet the film plays upon the pattern of bullying, torture, and crime that early American Christian hate groups perpetuated on black families during segregation. Yes, at the very end of the film it attempts to save itself with Ray's speech:


Ray Peterson: Remember what you were saying about people in the 'burbs, Art, people like Skip, people who mow their lawn for the 800th time, and then SNAP? WELL, THAT'S US. IT'S NOT THEM, THAT'S US. WE'RE the ones who are vaulting over the fences, and peeking in through people's windows. We're the ones who are THROWING GARBAGE IN THE STREET, AND LIGHTING FIRES. WE'RE THE ONES WHO ARE ACTING SUSPICIOUS AND PARANOID, ART. WE'RE THE LUNATICS. US. IT'S NOT THEM. It's us.
Art Wiengartner: [after a pause] I don't know what to say... What, do you want me to move? 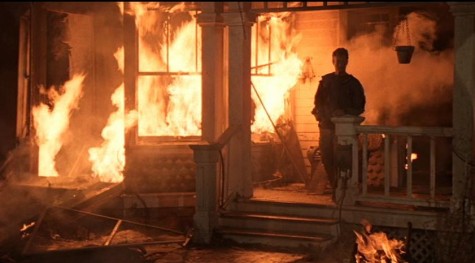 But, while this speech admits to the crimes associated with his paranoid behavior, moments later, the plot twists and we find that there really are skeletons in the truck of the creepy family’s car. The twist numbs the subversive stink of the previous speech by rendering the hate crime justifiable. The film's logic is similar to that of pro-torture activist who claim that torture is justified in all situations because the truth, it may uncover may negate the pain inflicted on the hostage.
Chicago Heights First Suburbs Hate horror Philosophy racism Ray South Suburban College Systemic Racism The Burbs Tom Hanks