Welcome to our journey into the guts of The Walking Dead. What kind of journey? A philosophical, psychoanalytical and political kind. What I would like to do over the next couple months is dig thought the Walking Dead episode by episode to see what it can teach us. Thank you for following me on this journey. I look forward to reading your comments. Be forewarned: There are spoilers everywhere. Don’t forget to check out my previous article in the Philosophizing TWD series: Philosophizing The Walking Dead S2E7 Pretty Much Dead Already and Post-Apocalyptic Group Therapy

Object fetish is a useful tool to unravel an ideological knot. The way fetishism works is when an individual (or in the case of the walking dead a group) invests a certain meaning into an object in order to maintain a level of dissonance towards pain or a disturbing thought. The world goes to the zombies so in order for Hershel to avoid direct confrontation with pain he wrangles up his zombified family and herds them into a barn for safe keeping. In order to deny the reality that members of his family are flesh eating zombies, he builds a fictional universe of meaning around the idea that his family isn't really dead. Hershel then socially invests in this story by getting the living members of his family to buy into it. All is well, the Hershel family protects the dead as if they were sick family members, and feds the zombified family left over chickens.

The problem here of course is that no matter how livid Hershel's sentimentality is towards his zombified family it doesn't change the fact that they will eat his face if given the chance. In order to maintain this disconnect Hershel's consciousness and unconsciousness conspire to trick each other by creating a fetish that denies one reality and creates a secondary reality to act as a blockage. In most situations, identifying the fetish is difficult until the fetish is knotted. Zizek argues:

The fetish is effectively a kind of symptom in reverse. That is to say, the symptom is the exception which disturbs the surface of the false appearance, the point at which the repressed Other Scene erupts, while the fetish is the embodiment of the Lie which enables us to sustain the unbearable truth. Let us take the case of the death of a beloved person. In the case of a symptom, I "repress" this death and try not to think about it, but the repressed trauma returns in the symptom. In the case of a fetish, on the contrary, I "rationally" fully accept this death, and yet I cling to the fetish, to some feature that embodies for me the disavowal of this death. In this sense, a fetish can play a very constructive role in allowing us to cope with the harsh reality. Fetishists are not dreamers lost in their private worlds. They are thorough "realists" capable of accepting the way things effectively are, given that they have their fetish to which they can cling in order to cancel the full impact of reality. (Zizek, 2014) 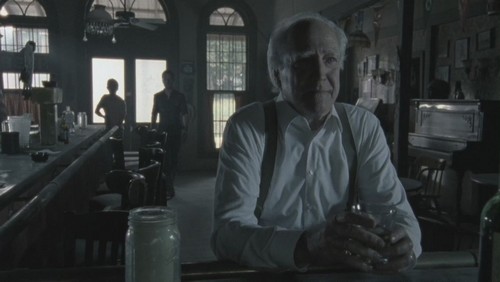 So what is the trauma? Because Hershel and his family maintained the fetish that the zombifed members of his family were alive, they were never able to process or mourn the death of important family members in their lives. The fetish not only acted as a blockage to the Hershel family’s trauma, but also a repository for the pain they were not able to interact with because of their collective delusion. What the mass shooting at the barn lead to is at once a re-traumatization and a coming to the light of the original trauma. When members die people mourn and go through the stages of grief. When the ideas that structure your reality die your world crumbles and you psychologically disassemble.

Check out the next article in this series: Philosophizing The Walking Dead S2E9 Triggerfinger, The Dangers Of Altruism and Political Cowardice