Mother's Day (2010), Not So Cute Babies and Fascist Family Values 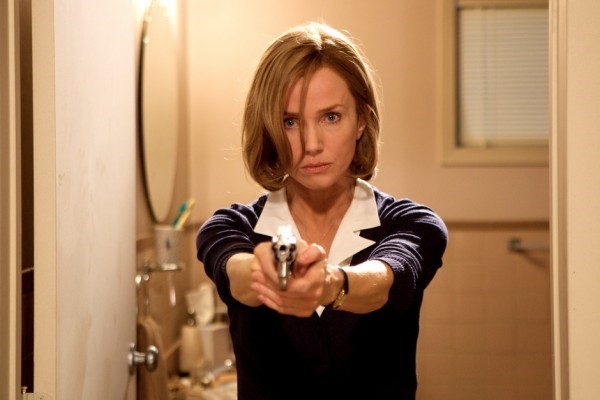 Mother's Day has the (overwhelming) tenancy to be about celebrating motherhood. But what if your mother is a murderous psychopath? What then? Is getting your mother a card enough or should you deliver her a bouquet of severed heads? Mothers Day's explores the evil mother and the banality of evil lying in the heart of motherhood. The film begins with a set of well mannered dude rob a bank. One of the brothers is shot, and this shifts the group to plan B, so they rendezvous at their mother’s house. Unbeknownst to the bank robbers, the house was seized by the bank and resold to a couple (Beth and Daniel Sohapi). The robbers take the Sohapi's and their friends host and rest of the film centers around the interaction between the Koffin family and the Sohapi's and their guests.

When Mother Koffin arrives, the crazed home invasion dimension of the film shifts, from manic to something more deliberate as the Mother takes control. Up until the mother arrives the boys have clear lines of authority. The older brother is in charge, and the younger siblings follow his lead. Left alone to guard the hostages in the basement the younger brother seeks to establish his authority to the captives by though violence that directly goes against his older brother's orders. It is as if the only way to demonstrate authority is to break the rules. When the mother arrives on the scene there is a surreal scene where she scolds her child for acting too brutishly.


Mother: You didn't do anything wrong
Addley: Didn't do anything wrong?
Mother: No you did what had to be done. You did it for the family.
Addley: Momma, how come you didn't tell us that you lost the house?
Mother: I tried but your brother Ike made it impossible. He made a very bad mistake.
Addley: Yeah, he does that.
Mother: Addley, Ike told me you struck one of them downstairs and it was a girl
Addley: I was scared. You always said... you told me... bark loud show them who is boss...
Mother: No. I said don't bark. Wait and then bite.
Addely: I'm sorry
Mother: And what else did I teach you?
Addley: Don't ever strike a woman. (Punctuated by mother slapping the guy.) (Addely starts crying) Hit me again. (Mother's Day 2010) 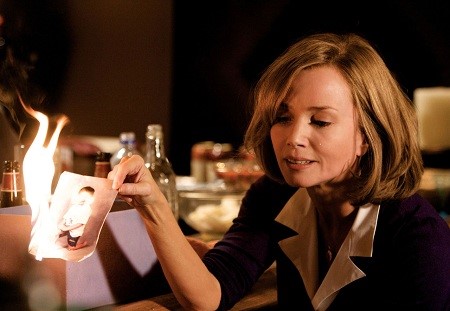 The Mother's cycle of control is a cycle of guilt. First, she knowingly tells her son that he did nothing wrong. What this did is reestablish his emotional state. Addley was distraught fearing the repercussions of his actions, yet on the other hand fully embellished in those actions. Radical guilt and radical excess are tools of fascist control. On the one hand, the boys are taught to be powerful, to define their reality and get others to buy into it. On the other, the realm in which they define their purposely leaves space over for excess. The excess is an over investment in their family over and above others. So when the mother congratulates and scolds her son, she is reinforcing the two sides of the banality of evil that fascism relies on. The idea that even though I commit some evil act that castrates the other's freedom, deep down I am still a noble and a gentle creature in the context of nationalism (or in this case the family).

The other juxtaposition that articulates the fascist binary is the Mother's reverence towards all things motherly and her ability to shift gears and throw the ideology of motherhood under the bus. While the Mother is rifling through the Sohapi's home looking for the money that they stole from her, she comes across a box filled with photos and photographs of the Sohapi's dead child. The child was run over by a car. On one side of her motherhood is her ability to empathize to the point of tears of the loss of a child (something she deeply values) yet on the other hand, uses the memory of the child's death (by burning the box of photographs) in order to motivate Mr. Sohapi to divulge the location of the stolen money. The Mother's flip flopping between drastically different sides of an ethical universe. This is a symptomatic her ultimate indecision and lack of clarity towards an ultimate ideological path. Arendt argues


The trouble with Eichmann (an evil nazi) was precisely that so many were like him, and that the many were neither perverted nor sadistic, that they were, and still are, terribly and terrifyingly normal. From the viewpoint of our legal institutions and of our moral standards of judgment, this normality was much more terrifying than all the atrocities put together.
― Hannah Arendt

The other mother in this film, is Beth Sohapi. She also happens to be the only other (female) character that has a sense of who she is. From the get go she sells out of her friends in order to gain her safety. First by outing the friend in the basement who is a doctor to come to the help of the wounded Koffin child. Later she sells out her friend who owns the dry cleaning business. In we have another form of fascism; American individualism. Where the Mother place her family on the same level that Nazi's place their nation, Beth places herself as a priority above others. One might argue that Beth is working out of a kind of Jack Bauer like survival of the fittest ethics, but ultimately Beth's actions turn out to be rooted in capitalistic motivations rather than self-preservation or maternal instinct. Following the fascist binary on one side we have the Beth who acts out of self-preservation and on the other we find that self-preservation is fundamentally rooted in fiscal gain. 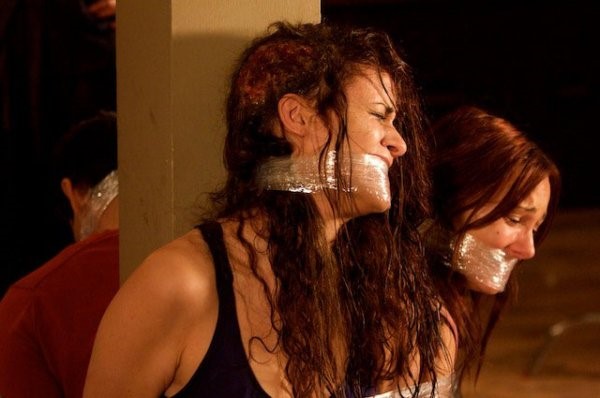 The third way is vocalized in Treshawn Jackson. Treshawn is the only character in the film who thinks about solving the problem from the perspective of the collective good. Unlike the rest of the hostage his first instinct is to rally the troops against a common enemy. Early on, one of the women stand up to Addely Koffin, and he forces her to chew his gum and sexually abuses her in front of the rest of the hostages. Immediately, her spirit is broken and she accuses her fiance of inaction. The invasion of the Koffin family is reminiscent of KKK hate crimes where mobs would invade the homes of black families set their homes on fire, lynch and/or force families to commit violence against and in front of each other. The idea being two fold; break down the social, family and economic dynamics of the enemy while reinforcing the nobility nationalist or racial characteristics of the invaders. Mother's Day crime (and hate crimes in general) is not to destroy your enemy, but to create a culture of inferiority by breaking down the social dynamics that lead to class consciousness. In other words, the Mother's goal was to turn everyone against each other so that the collective consciousness of “we” remained fragmented and inaccessible notion.
Addley Banality of Evil Beth Fascism Hannah Arendt Happy Mother's Day! horror Mother's Day Motherhood Philosophy power Sohapi