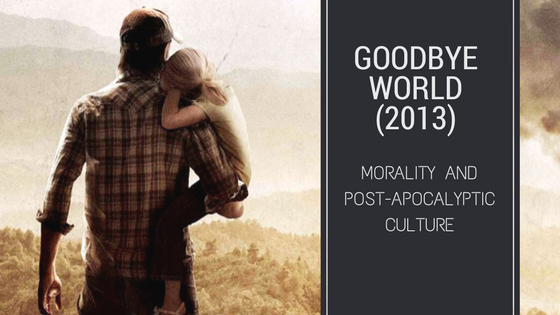 What would you do after the end of the world? I could see myself trying to find a way to some snowy mountain cabin in order to eat squirrel jerky and snowboard the end of the world away. At max, I would bring one person to tag along with me in order to avoid Sartre's Hell Is Other People paradigm. In 1944, Sartre wrote a genious play about three people in a waiting room in hell. Long story short the dilemma was that the three people each were romantically drawn towards people they could not connect with. The dude was drawn towards a woman who was a lesbian, and the lesbian was hooked on the other lady, and the second woman wanted the dude. Hell therefore is other people. In other words, hell is wanting something in the other that does not exist. I'm sure none of you have experience this torturous yearning.

“So this is hell. I'd never have believed it. You remember all we were told about the torture-chambers, the fire and brimstone, the "burning marl." Old wives' tales! There's no need for red-hot pokers. Hell is—other people!”
(Sartre,2014)

Goodbye World is about a group of friends who (mostly) come together for a reunion. As each character is traveling to the excluded survivalist-like home at the top of a mountain, the tell-tale apocalyptic signs begin playing out. All the cell phones in the world are sent the same message, technology collapses and with it society. The group of friends who haven't seen each other for a significant amount of time revel in their reunion until they are forced to really to know one another. Lies are spilled, best friends make out with spouses. In essence, what we see are a slower progression of the decay of the social order in the microcosm of an unevenly knit circle of friends.

The movie begs the question, do the strength of our social contracts have the power to persevere beyond the authorities that hold us accountable to them? Let’s take for instance traffic lights and stop signs. In the first stages of any given catastrophe traffic law is one of the first social contracts to be tossed out the window. People are frantically trying to get from point A to point B all the same time. Cars crash and chaos happens. Now let’s think a couple weeks out. Mass causalities, government is useless, police and fire have left their posts or died. Devoid of all the authority that regulates and penalizes us for running a red light or stopping at a stop sign, would you stop?

In a certain respect what gives these traffic tools significant to our lives, is not that they protect us from unregulated traffic or are a kind of natural good, but their relationship in a symbolic network of authority and meaning (I argued the same point in relation to why Rick wears his police uniform in The Walking Dead.) Traffic lights are not just lights. They are fixed capital. These regulating signs produce a set of behaviors in the driving population that condition their behavior. When a driver steps outside the allotted behavior by say running a red light, the driver (if ethically mind, and even when you not) are interpellated by the breaking of behavior into a generalized mental state of worry or guilt. If this hypothetical intersection is visibly paroled by a cop of has signs that say that the intersection is filmed the driver's interpellation is amplified by the driver's capacity to worry. The driver may check his rear view mirror and question themselves, “Did the cop see me? Did the camera grab a picture of my license plate?”

The question here is so what is the mentality of a driver who comes upon a stop sign after the civilization has ended? Of what use are stop signs without traffic and the potentiality of receiving a ticket? Now lets saw in another direction. What morality maintains its usefulness in the post-apocalyptic symbolic universe? The struggle in this movie is how characters desperately try to cling to ethical, personal, and ideological principals even after meaning that supports their relevance collapses. Thinking back to No Exit and Hell Is Other People. Would the hell be such a hell if the imperatives of the lived world were not haunting the afterlife? Why do social constructs and morality still flails uselessly when the structure that gave them significance has been gutted alive?

In some respect the blame may be in our biology. The cognitive mapping and chemical reactions that drive us towards our various capacities have been trained and hardwired into us by our education system, and the restrictive universe of our adult lives. Reformatting the brain is at once a near impossible and yet natural event. Human plasticity is endless. Our brains and genetic coding are adaptation machines. The issue is the relationship between our cognitive maps and sociopolitical symbolic mapping of a society. The issue is that a state has the power, authority and resources encode our brain, while a small circle of friends does not have the same level of authority. In friendship we seek (ideally) an egalitarian and mutual association between two equals. Unlike states, we are not born into friendships. The adaptive patterns of friendships take upon a more balanced influencing mechanism. Both parties have to buy into the adaptation, though democratic agreements. Social contracts have to be established mutually agreed upon steps. The state on the other hand, simply doesn't give a shit, you are clay to be molded into citizens. There is a sense in which totalitarian governments may have a greater capacity to create the kind of culture that could adapt to the end of times than friendships ever could I.E Ricktatorship.