By SquidXIII - May 03, 2014
Today I'm going to sidestep blood and guts and saw into a death-unicorn of a different color; Disney's Frozen. Frozen is the colorful sing along about Ana and Else. Ana and Elsa are of course bourgeois princesses that live a privileged life while the poor toil at labor intensive trades. Below I will interrogate three songs from the film: The Frozen Heart, First Time In Forever, In Summer, and Let It Go. 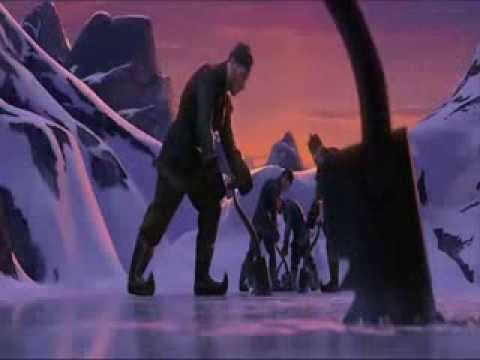 The capitalist machine is in full force right from the opening song. Ice workers, at the very bottom of the supply chain, trudge away at a frozen lake collecting ice cubes for the rich who sit in comfy and warm castles. The song seemly innocence hides the subversive sting of a slave song. On the surface, the nobility of work and bootstrapped Republican values. The song comments on the difficulty of the work as well as the necessity of the work.

Cut through the heart, cold and clear
Strike for love and strike for fear
See the beauty sharp and sheer
Split the ice apart
And break the frozen heart (Source: Frozen)

The ice workers are organized into an assembly line, each worker with their proper place. The ice is first sawed, then pushed down the water filled troughs to workers who pull the ice out of the water. Then workers split the ice in two and stack them on a wagon that carts the ice to the city. The worker song her calls attention to the mechanization of the work. The thudding of the percussion marks time like a metronome as they work. Frozen Heart also highlights their alienated labor. Keeping to the repetitive task they lose a little of their heart as they work. The of the worker's life is reduced to the single activity of gathering ice. On the surface, it would appear that the workers are compliant with their place in the division of labor. Yet in the following stanza they sing:

This section of the song calls attention to the power of their work. Together they can harvest more ice than any one man. Power in numbers is the power to strike. Thinking back to the previously quoted stanza the word “strike” takes upon its proper political meaning. The ice workers are organizing. Building their numbers and growing their spirit until the time is right and they can strike to fight the royalty that enslaved them to poverty. Endowing the Frozen Heart with a subversive sting.


The First Time In Forever

Skipping forward, the narrative tells us that while Elsa and Ana were screwing around with Ana's magic powers, Elsa shot Ana with a burst of ice. The parents overreact, and drag the child to the rock trolls in order to have Ana's memory of Elsa's power erased. What this means is that the two sisters grow up spatially and emotionally separated. Literally compartmentalized to separate spaces. Ye, Ana desperately wants to play with her sister, but Elsa is terrified of losing control of her powers and hurting Ana again (one wonder why the rock trolls didn't erase both of the children's memories in order for Ana and Elsa to have normal lives.) Skipping forward to coronation day, Elsa has come of age to take political power over the kingdom. Ana feels it's a good time to bust out in song, and patronize the town about their poverty. She sings;

Don't know if I'm elated or gassy
But I'm somewhere in that zone
Cause for the first time in forever
I won't be alone (Source: Frozen)

Please Disney, explain to me why your princess who is the least alone, person, and least ignored person in your Frozen kingdom are singing about finally having the opportunity to connect with others and be the focal point of their attention? I mean, the proletarians in the Disney kingdoms are totally economically and socially subservient to the royalty at what point is a Disney princess ever alone? The line that solidifies for me Ana's cognitive dissonance is when Ana sings “For years I've roamed these empty halls,” and “There'll be actual real live people.” Which is to say that the servants in the castle don't count as real people in Ana's eyes.

Let It Go Vs. In Summer

Let us saw into the dialectic tension that runs across Let It Go and In Summer. In Let It Go, Elsa is singing about finally being free to use her power. As she sings, she materializes a castle for herself. One only wonders what the ice workers would make of this scene, seeing the toils of their labor negated. The Princess who is now commanding the economical apparatus that gives the ice workers a job always-already had the power to make their job irrelevant. The cognitive dissonance in this song is acute. Else sings about finally being free to express herself in her albeit in a political safe state of isolation. The real horror of this song is the political ramification that imaginary power is somehow more fulfilling than the real political power that she ran from.


In Summer structurally mirrors Elsa delusion of grandeur by presenting a contradiction in terms; a snowman who dreams of summer. Mind you Olaf was created during Elsa's song. It is as if Olaf is the residue of her internal contradiction. Between fictitious power and real power Olaf is the part of no part. As Kristoff is about to point out the impossibility of the Olaf's delusion, Ana interjects stopping before Kristoff could inform Olaf about how reality works. It is as if to repeat the phrase that the Last House On The Left made famous. “Keeping telling yourself it's only a movie” so that you can protect yourself from the film's truth. Olaf, here, is a stand in for the average viewer of a Disney film. Children. Fodder for compliance.


The ideology here is that if a lie makes you feel good then no one should pop your bubble and inform you about reality (Think about religious like a dogma in American culture of protecting a child's ignorance of Santa Claus's true purpose - forcing moral compliance and spreading capitalism.) This dogmatic innocence is punctuated when, after the narrative is wrapped up and the world is unfrozen Olaf begins to melt and Elsa breaks reality to fulfill the Olaf's dream. Ironically, only moments before Elsa realizes (all to quickly) that love is the force required to control her power. Which is to imply that the original loss of control over her power that spun the narrative out was because even before Ana's memories were erased Elsa did not love her sister Ana. As Olaf is melting, and Elsa uses her refound sense of love to create a magic flurry cloud to hover over Olaf's head to keep him from becoming a puddle. So what is Olaf to Ana and Elsa? Olaf is the snowman that they didn't make together. The childhood of failed sisterhood magically restored by a convenient plot device. 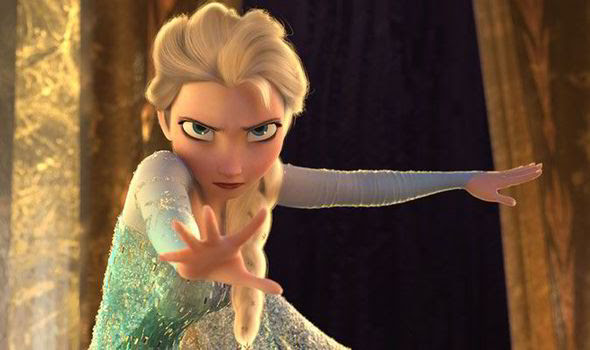 A question came to me when the credits rolled, why would the Kingdom's citizens allow Elsa to come back and reign over their lowly lives when she committed the terrorist act of freezing the whole city? A city that wasn't prepared for the winter. Think about how the sudden change in temperature impacts infant mortality rates? The farm land rendered useless? Or the poor eyes workers who are forced to watch their families starve to death because Elsa single-handedly shut down the ice trade? Sadly, the Frozen Part 2, I'd like to see made will never come to fruition. The story of Kristoff, a lowly ice worker, who organizes the poor of the Kingdom in order to overthrow a tyrant. Here I side with Duke Weston, who called the kettle black when he named Elsa as a threat to the proletariat.

Would not the proper justice be to burn Elsa at the stake?
ana elsa frozen horror ice workers In Summer Let It Go olaf Philosophy power revolution slavery The first time in forever the frozen heart