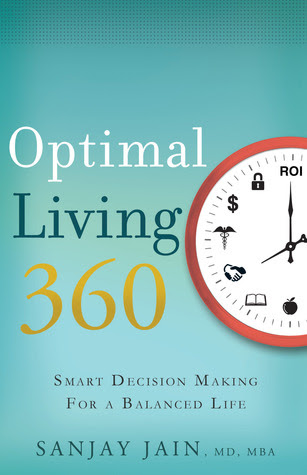 Do you want to live more like a capitalist? Do you want to think about your body and life as if it was a commodity? Are you getting a fair shake for your labor on the market? Then maybe you should consider reading Optimal Living 360 by Sanjay Jain, MD, MBA so you can better objectify yourself like a proper utilitarian. Price tags not included.

I was struck in the first chapter of Optimal living, which covered the basics of Jain's "theory" of living, by the fiscal being used to describe life. One must see a return on one's investment, as if one’s life were comparable to the stock market and student loans. Optimal living ushers out a list of seven core asses that Dr. Jain suggest we be mindful of; Assets: Safety, Physical, Intellectual, Relationships, Economic and Spiritual. Notice that the first word of the acronym ASPIRES is not one of the core assets but a lazy way to create an acronym by adding a word.

After the introduction the following chapters are dedicated to each of the letters in the slick acronym that take place after the letter A. The book reads like a list of things a mother would tell her child. Go outside and play. Read a book. Go make friends. Don't get into debt. And pray to God or meditate. I have read several self-help like books, and Optimal Living does not add anything particularly new to the genre that wasn't there already.

I found the last chapter particularly annoying because Jain uses Pascal’s wager in order to justify his own belief in good, and the necessity for you to believe in something 'spiritual'. I found this particularly alienating because up until the last chapter God was not mentioned in the text. Spirituality was alluded to in a general purpose way from anything from Catholicism’s to feeling 'spiritually' connected to a death metal song playing on a car radio.

After reading the book I'm not clear who the intended audience is. The book is written in a simplistic way that seems targeted towards anyone who would like to live more 'optimally' but the book has a sever religious undercurrent that secularist may find off putting. Also, if you are not bourgeoisie you may find much of the advice outside the capacity of minimum wage. You may do better finding a used copy of Stephen Covey's: 7 Habits of Effective People.