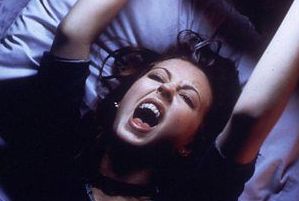 Once upon a time, before puberty came dripping two sisters made a pact. Ginger (Katharine Isabelle) and Bridgette (Emily Perkins) declared their fidelity to each other unto death. Immediately slipping into a montage of photographs where Ginger and Bridgette are posing in staged crime scene photos that they took for a class project. Ginger Snaps declares being a teenage girl is like caught in a loop of your public suicide. Puberty explodes your body. Boobs and hair appear ex nihilo. Hormonally induced neurosis spills anarchy into her self-esteem and combines with a counterproductive sex drive that declares a new found compulsion. Puberty is a traumatic transformation, not unlike a werewolf emerging from your skin.

When Ginger's puberty drips down her leg for the first time she calls it 'The Curse'. Like it or not, she is invested with developmental maturity imposed on her by her biology. At the same time society also invests in her complex layers of sexualization. Boy's stare at her boobs, and reduce her to her anatomy, which castrates her ability to build an authentic relationship to the social body. Becoming thing-ed, or rather reducing her to abject parts is living a symbolic death. Discarded by the norm setters. Yet, humans are evolutionarily predisposed to seek, acquire and maintain group belonging and in a post-puberty stage to acquire a mate to reproduce with even against the culture and groups that other them. Ginger is on the wrong side of popular, outcast-ed with her sister in socially meaningless space. Bonded in their abjection they claim death as their space, thereby claiming their abjection and using it to find empowerment.

The call of Ginger's curse calls her into the popular to find the social recognition for her psycho-sexual development. There is a genius scene where Ginger is walking down a hallway for the first time after being werewolf-ed. The scene is a close-up of her face as she walks down a crowded high school hallway. Donning the clothes of her sexual liberation, she begins with her head down, shy and worried, and as she transgresses the crowd, she gains recognition from her peers which lift her head and strengths her pace. By the end of the scene, she is walking with a purpose constituted and reinforced by peer pressure.

Ginger: I get this ache... And I, I thought it was for sex, but it's to tear everything to #!&ing pieces. 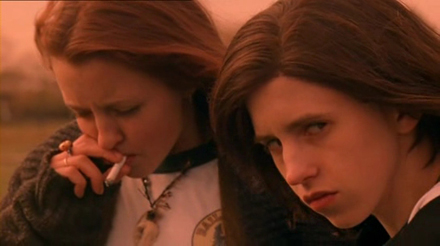 Betty Friedan the moderate American feminist argued that there is a near perceptible haze burdening the American housewife. She called this haze the Feminine Mystique. The argument goes that women are trapped in their sexualized roles in the division of labor in the nuclear family, and it is metaphysically killing them. As Marxist we know what Betty was really talking about was alienation. The woman trapped behind a stove, expected to take care of children and mass produce babies are an exploitative positions which restrict social, metaphysical, and economic autonomy. The division of labor works by relegating individuals to smaller and smaller operations in order to more effectively produce some product. The role of a working husband and a housewife produce the middle-class white family, reproducing the dominant American social narrative. The idea being that if all families shared a similar set of values and behaviors then they would be easier to control and sell things to.

Trapping people in to impose lifestyles creates the psychology of the subaltern and others for those who do not feel like they fit in. After centuries of female submission to the family matrix, feminist declared they wanted out, a space to declare and articulate their own needs. During the 70's, some feminist burnt their bras and declared freedom from the contraption created by men in order to hold their sex in place. But, Ginger's popularity does not hold, because internally she is combating several competing drives. To give into her desires, to eat boys, to be the person her sister is pushing her to be. Never fully embracing a direction, Ginger roughly flips between desires seeking to find a way to spin her trauma (puberty) into a narrative which can contain her new identity and frame her impulses. Is she becoming a woman or a monster? 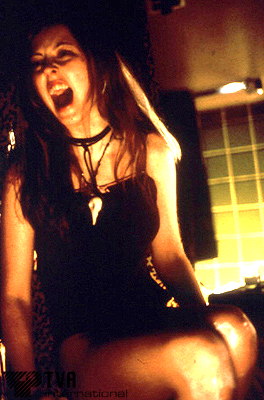 Remember the opening moments of Carrie. Carrie White is ignorant of her biology, she flails upon herself, terrified of her own existence. Becoming a sinned thing in the eyes of her mother and god, the two pivots in which structure her reality collapsed in an intervention of the real that destabilizes their power to control her reality. On the other side of the puberty binary, let’s look at the transformation of the boy Ginger ate. While the initial, puberty leaking terrified him, he soon adapted to the power that came with the werewolf curse (and hormones). Raged, he flings himself forward into testosterone base decisions without the guilt that fills Ginger's story line. Covered in zits and sweat, he did not face the reality fragmenting trauma that Ginger was persevering though. The lesson here is in the way that girls and boys are socialized into their gender and sex. Boys are and instilled with a stupid confidence that propels their sexual exploits from pubic hair to their first lay as achievements of social status, while girls are guilt-ed into hiding their anatomy for it may rouse the beast in men, and pushed into a psychological corner where bodily changes are a radically private affair that needs to be kept shadowed or be labeled whorish.

Ginger: [to Brigitte] A girl can only be a slut, a bitch, a tease, or the virgin next door.