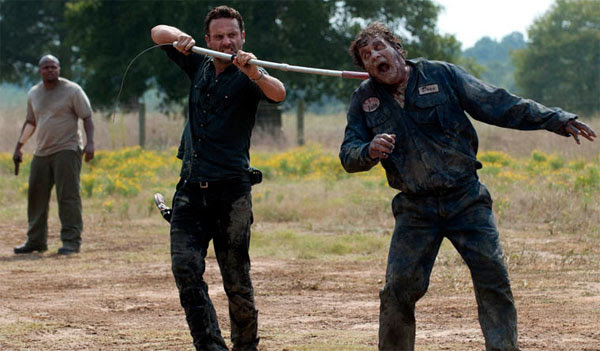 Welcome to our journey into the guts of The Walking Dead. What kind of journey? A philosophical, psychoanalytical and political kind. What I would like to do over the next couple months is dig thought the Walking Dead episode by episode to see what it can teach us. Thank you for following me on this journey. I look forward to reading your comments. Be forewarned: There are spoilers everywhere. Don’t forget to check out my previous article in the Philosophizing TWD series: Philosophizing The Walking Dead S2E6 Secrets And Lies That Make Truth Possible

What is the goal of therapy? A social worker or therapist might argue the purpose of therapy is to get people to be happier or live more successful lives. For many reasons people enter into a maladaptive pattern or get fed up with a certain way of living. People seek out professionals to talk out their problems. Shrinks and priests come to the rescue and listen in order to deceive the malady that has someone in knots. Religious leaders find god in the gaps between behavior and thought.
Say for instance, a woman develops a self-deprecating attitude that was created by the overbearing relationship she developed with her mother when she was a child. The priest looks in the gaps a set of meanings that unravels the meaning in so far it aligns to his metaphysical cognative mapping. The woman may be under the burden of some sin because she did not honor her mother. The current self-esteem becomes some kind of transcendental curse to punish her for disobeying her mother’s standards. The shrink seeks biology in the gaps. A set of neural pathways got wired in such a way where symptoms develop. The woman becomes depressed because the self-deprecating thoughts are distorting her access to a reality in which proactive self-esteem is possible. For the priest the treatment plan might be more prayer, or a couple hail Marys. For the therapist in the treatment plan is one or another path of interventions seeking to short circuit and rewire the neural pathways in order to reach a less troublesome state of being.

You might be asking yourself what therapy and treatment plans have to do with The Walking Dead. Let me saw it out for you. Nietzsche argued that our minds act like political arenas where multiple personal inclinations conspire against each other to take power. The Will To Power was the moment where you cut though the crap and made a choice that silenced other inclinations. Using the above example the hypocritical woman becomes confronted by a complex of influential thoughts which seek to overwhelm her capacity to self-define her reality and fight out her Will To Power. Thoughts implanted by a crappy childhood become the reigning discourse and structure a personal reality where her Will To Power is suppressed or made irrelevant. You could compare this to an oppressed minority in America. Economic and political forces condition the social reality in such a way where the acceptability of political and/or economic power are excluded. The same dilemma plays out when self-sufficient and proactive thoughts seek to gain influence among other thoughts.


Let’s add a couple layers of complexity. Each survivor is internally fighting out this internal fight for the Will To Power and seeking to influence others in order to gain sociopolitical influence in order to move the group in a desired direction. Shane's internal struggle is between his respect for Rick and his desire to move the group in a direction where he feels the group’s survival probability is higher. Shane's believes require the support of the group to put them into action. Rick internal struggle is a little more completed because of its reactionarism. Rick wants to protect the group and his baby mama, yet in order to push towards this goal, he sides with Hershel over cattle driving zombies into a barn. Collecting zombies-like Pokemon isn't a safe thing to do in thing to do, but it solidifies his bond with Hershel that meets Rick's immediate priority of staying on the farm. On the one hand, he already has gained the respect of the group in a way that Shane has not, so he is allowed a larger leeway in making stupid decisions. What this means is that Rick has already gained the support of the group in a way that Shane has not. So, they have to worry about pursing the role of dominant influencer in different ways. 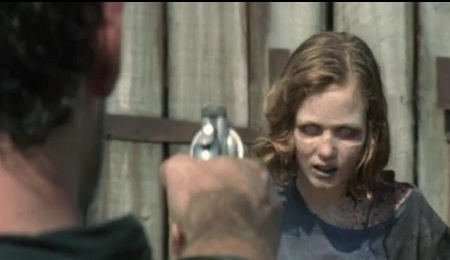 In the middle of Rick and Hershel building an aliance, Shane uses the situation to instill distrust in Rick’s leadership and forces the survivors to counter Rick’s authority. Suddenly a political variable comes on the scene that neither Rick nor Shane was prepared for. Sophia shambles out of the barn. Everyone freezes in indecision, which opens up space for Rick to reassert his command by making a decision. I'd argue that finding out Sophia was a zombie and Rick shooting, she acted as a therapeutic intervention which short circuited a maladaptive collective ideology. The survivors were plagued by pre-apocalyptic notions and norms of society that ceased to exist: everything turns out OK as long as you try hard enough and hope is all you need. Unbeknownst to Hershel, Rick or Shane the zombies in the barn were probably the most important factor in the farm being as safe as it was. As we find out later zombies can be used to camouflage survivors in mobs of zombies. A giant pile of zombies in a barn is a good deterrent.