Welcome to our journey into the guts of The Walking Dead. What kind of journey? A philosophical, psychoanalytical and political kind. What I would like to do over the next couple months is dig thought the Walking Dead episode by episode to see what it can teach us. Thank you for following me on this journey. I look forward to reading your comments. Be forewarned: There are spoilers everywhere. Don’t forget to check out my previous article in the Philosophizing TWD series: Philosophizing The Walking Dead S2E5 Chupacabra, Daryl and the Myth of Sisyphus

Secrets is about... well secrets, no? Lori is juggling a complex pile of lies. She is pregnant because she bumped dirties with Shane, and but Shane does not know he is the baby daddy. On the other side of the farm Hershel is lying by omission about the zombies shambling around in his barn. The question this episode begs is: What is the right truth?
Let us saw into Lori's rational for lying. Lori is a crafty woman who is otherwise inept at surviving the zombie apocalypse without moving a man in her life to protect her. So, when the end of the world begins and she has no reason to question Rick's death, she begins a romantic relationship with Shane. This is a smart move on Lori's part because wrapping her legs around the closest alpha male she secures her safety. But on the other hand, Lori is also manipulated by Shane, who lies about the certainty of Rick’s death. What Shane's lie produced that Lori's did not is a truth effect. In other words, what Shane's lie about Rick opened up is a space where Lori could cling to the kind of man she is predisposed for. A man that doesn't need her approval, or reassurance to bolster his self-esteem. Shane and Rick are caught in a subtle dialect where Lori is the medium of exchange (I argued this more fully in my critique of E1S1).Shane's lie is a lie, but what it nonetheless supported the capacity for Lori to develop real feelings for Shane.

The state of the situation shifted in such a way where Lori's emotional validity became less important than her survival. Rick arrives and Lori freaks. So in order to protect herself, she lies to Rick about knocking dirties with Shane in order to avoid the conflict that would put both men into a fight to the death. On pure survivalist level this was a smart move that avoided conflict which may have left her with one man to protect her instead of two. It is important to note that this is one of the first major deviations from the comic; Shane does not survive past the first camp in the comic.

Eventually, the lies are forced upon themselves and unravel. Maggie confronts Lori about putting Glenn at risk to hunt down abortion pills. Glenn brings the knowledge about the zombies in the barn to Dale, who then confronts Hershel. Lori then leaves her morning after pills out and Rick finds them, and the episode concludes with Lori confronting Rick about getting dirty with Shane only to find out he already knew. All secrets are opened up and the drama between the survivors opens to the fragmented plane of possibility. The meaning constructed for the characters caught on the shrouded side of lies has been flipped. Alain Badiou argues


What happens in art, in science, in the true (rare) politics, and in love (if it exists), is the coming to light of an indiscernible of the times, which as such, is neither a known or a recognized multiple, nor an ineffable singularity, but that which detains in its multiple-Being all the common traits of the collective in question: in this sense, it is the truth of the collective's being. The mystery of these procedures has generally been referred either to their representable conditions (the knowledge of the technical, of the social, of the sexual) or to the transcendent beyond of their One (revolutionary hope, the lovers' fusion, poetic ec-stasis...)...A subject is then a finite moment of such manifestation. A subject is manifested locally. it is solely supported by a generic procedure. Therefore, stricto sensu, there is no subject save the artistic, amorous, scientific, or political... The existence of a truth is suspended from the occurrence of an event. Alain Badiou - Being and Time (p. 17) 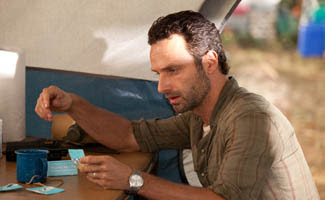 There is a sense in which, when a lie is believed wholeheartedly by those subject to the lie, and even the teller of a lie, we are in a realm that more full of truth than at the moment where a lie is unraveled. In the unraveling of a lie reality confronts a fiction and disintegrates the possibility of truth. Rick the loving husband of a faithful wife, spiting oblivion during the end of the world, is not just Ricks own personal construction, but it's also the reality of the story he tells himself in order to justify his identity to himself. The danger here is the role Rick plays for others in structuring their sense of identity in the community. Rick is the kind of autocratic leader that defines what identity through community means to others. When Rick finds out the relationship that founds his self-esteem (because Lori is what he uses to justify his self-confidence) does not conform justly to his present understanding of the relationship the tie binds his sense of self to the world is snapped. Truth, the kind of truth that matters, is not when we are able to identify reality from fiction, but when the difference between reality and fiction does not matter because we are fully invested into the fiction that structures reality.