Philosophizing The Walking Dead S2E2 Bloodletting or is Rick Menstruating? 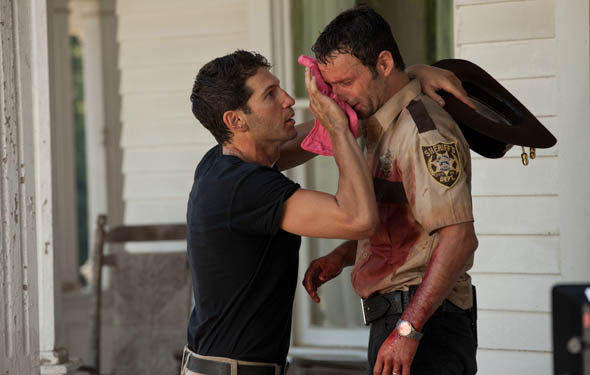 Welcome to our journey into the guts of The Walking Dead. What kind of journey? A philosophical, psychoanalytical and political kind. What I would like to do over the next couple months is dig thought the Walking Dead episode by episode to see what it can teach us. Thank you for following me on this journey. I look forward to reading your comments. Be forewarned: There are spoilers everywhere. Don’t forget to check out my previous article in the Philosophizing TWD series: Philosophizing The Walking Dead S2E1 What Lies Ahead and Do Zombies Poop?

Bloodletting is an old school method of medical treatment. Letting out some blood is based on the idea that too much blood built up in a human’s body which created tension or pressure that drove people crazy. Bloodletting was located in an Aristotelian medical model of mediums. In order to keep a proper sense of order a body needed to maintain a balance between extremes. Wikipedia argues “that “Bleeding” a patient to health was modeled on the process of menstruation. Hippocrates believed that menstruation functioned to “purge women of bad humors (Wiki)."

How does bloodletting relate to this episode of the walking dead? The easy answer would be to make a quick association between the transfusions that Rick is giving to Carl. But what are Rick’s symptoms? Let’s take a step back. At the very end of What Lies Ahead, Shane, Carl, and Rick are transfixed by a deer that they come upon in search of Sophia. All the characters are stunned. Is there some sublime radiance being emitted by seeing a deer in the woods? I'd argue that their transfixedness could be related to a compulsive desire of being awestruck at the idea of eating some deer burgers, after weeks of canned goods. But the trio does not allow for a confirmation of this theory. Carl being a kid, slowly steps towards the deer as his father and foster father egg him towards the deer. Suddenly a beautiful moment is shattered by a bullet that pierces the dear and Carl. Both fathers’ emotions invert; sublime joy to dread. The other key, to this scene is the prayer that Rick delivers to himself calling the God he only haphazardly believes in to give him a sign that he is making proper leadership decisions.


After the Car is shot, Rick finds himself in shock standing over Carl's potential death bed. Hershel, and Shane try to calm him down. Later Lori joins in. The argument the three give is that a father and a man need to be in the room when his child dies, Carl's situation is beyond his power to influence and because of the blood he has given he is too weak to go trumping through the woods in search of the medical supplies.

Several struggles are in play at Hershel's farm. Rick is caught between two universes; a leader of a group of survivors and being a father. The trouble here is Rick's juggling of social roles, and how those relationships interlock in the context of the leading a group of survivors. Every day is take your son to work day. Rick is not able to relegate the two social spheres because the line separating the two time frames have ceased to exist. There is a sense in which being a fatherhood is already included at prediscursive level, where the role of a community of leaders always-already includes training the next round of leadership along kinship lines. What the zombies brought to the world is not only death and destruction, but a destabilization of the meanings which regulate and constitute the social formation.

So, the strange question comes to mind, is Rick menstruating? Of course, I am referring to the misogynistic stereotype where menstruation is a sign of a woman wicked and agitated side making its appearance like a werewolf. Hairy and biting things under a full moon. It's almost as if the trauma Rick's experience confronting the potential death of Carl is not nearly as great and his self-referential sense of impotence due to the fact that he is in a state where he can do anything fix Carl.

The scene calls to mind an insidious twist on the Abrahamic legend. Called by God to kill his son, Abraham drags Isaac to an altar in order to drive a knife into his son to prove his loyalty. But, what if instead of stopping Abraham at the last second from killing his son, God threw a rock from heaven that shot through Isaac abdomen. What would Abraham's reaction to that be? I'd argue that it would establish his sense of self and force him to severally question his role, not just as a father but as a leader in a community. In this chaotic place that Rick, and Abraham is in would not a non-nonsensical procedure such as bloodletting actually help calm down both characters? Maybe, menstruation would do men, in tough situations, some good.

Check the next article in this series: Philosophizing TheWalking Dead S2E3 Save Last One and Does It Matter If God Exists?
bloodletting Carl horror men's studies menstruation Philosophy rick the walking dead twd