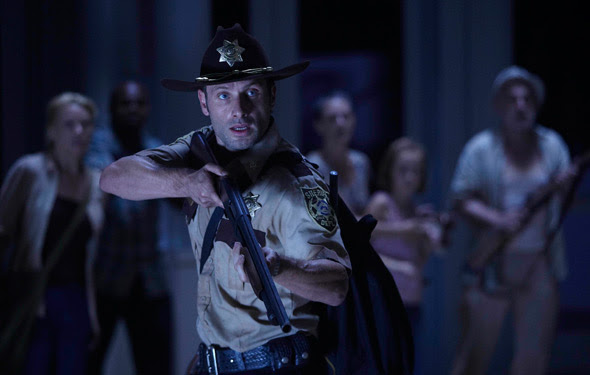 Welcome to our journey into the guts of The Walking Dead. What kind of journey? A philosophical, psychoanalytical and political kind. What I would like to do over the next couple months is dig thought the Walking Dead episode by episode to see what it can teach us. Thank you for following me on this journey. I look forward to reading your comments. Be forewarned: There are spoilers everywhere. Don’t forget to check out my previous article in the Philosophizing TWD series: Philosophizing The Walking Dead S1E5 Wildfire And Ricktocracy

Summary: TS-19 begins with the door to the Center of Disease control opening. Rick and company head in and meet a manic depressive named Dr. Jenner. The survivors get drunk, and showers. At the end of the episode the CDC computer system goes homicidal and activates a self-destruct sequence. Dr. Jenner decided to say behind and explode. Three of the survivors join him. Two change their mind, and the rest of the survivors ride off into the sunset as the CDC explodes.

About a year ago, I ran into an acquaintance boyfriend had died over the weekend. My response was “Well that sucks. How are you doing?” She responded by telling me that she appreciated that I didn't express excessive pity for her situation, nor did I impress on her the importance of religion. I laughed and told her that I have strange views on death and usually have some dirty looks cast my way when I talk about it. I figure if your death is not a celebration for people you knew in your life, then you did something wrong with your life. For this reason I plan to write into my will that there will be a clown making balloon animals at my wake. My friends think I'm joking. I'm not.

Nietzsche argued a similar point in his aphorism about the Eternal Return of the Same.

The greatest weight.-- What, if some day or night a demon were to steal after you into your loneliest loneliness and say to you: "This life as you now live it and have lived it, you will have to live once more and innumerable times more; and there will be nothing new in it, but every pain and every joy and every thought and sigh and everything unutterably small or great in your life will have to return to you, all in the same succession and sequence - even this spider and this moonlight between the trees, and even this moment and I myself. The eternal hourglass of existence is turned upside down again and again, and you with it, speck of dust!" Would you not throw yourself down and gnash your teeth and curse the demon who spoke thus?... Or how well disposed would you have to become to yourself and to life to crave nothing more fervently than this ultimate eternal confirmation and seal?
from Nietzsche's The Gay Science, s.341, Walter Kaufmann transl.

What does death mean at the end of the world? For Andrea it's an easier answer to her low esteem and sense of self-efficacy. For Dale it is leverage to convince Andrea to change her mind. Dr. Jenner uses death to ease his burden for failing to live out his wife's legacy. Death for all three of these characters is something they are used to moving beyond a problem that they have because they are alive.

Nietzsche's argument here is not that one should live a life that is perfect. Art isn't about being perfect, it's about putting in the world something from the guts. To live with the passion of a creator. This is where Shane succeeds and Rick fails. Shane is a character that passionately owns his sense of self. Rick on the other hand is clinically neurotic. Always second guessing, and seeking someone to confirm his sense of self. Shane steps confidently out into decisions without worrying if they will be liked. Rick is perpetually seeking personal reconstitution through others.


Check out the next article in this series: Philosophizing The Walking Dead S2E1 What Lies Ahead and Do Zombies Poop?
Death Eternal Return of the Same horror nietzsche Philosophy the walking dead Zombies