By SquidXIII - March 14, 2014
Welcome to our journey into the guts of The Walking Dead. What kind of journey? A philosophical, psychoanalytical and political kind. What I would like to do over the next couple months is dig thought the Walking Dead episode by episode to see what it can teach us. Thank you for following me on this journey. I look forward to reading your comments. Be forewarned: There are spoilers everywhere. Don’t forget to check out my previous article in the Philosophizing TWD series: Philosophizing The Walking Dead S1E4 Vatos And Occupy Deez Brainz 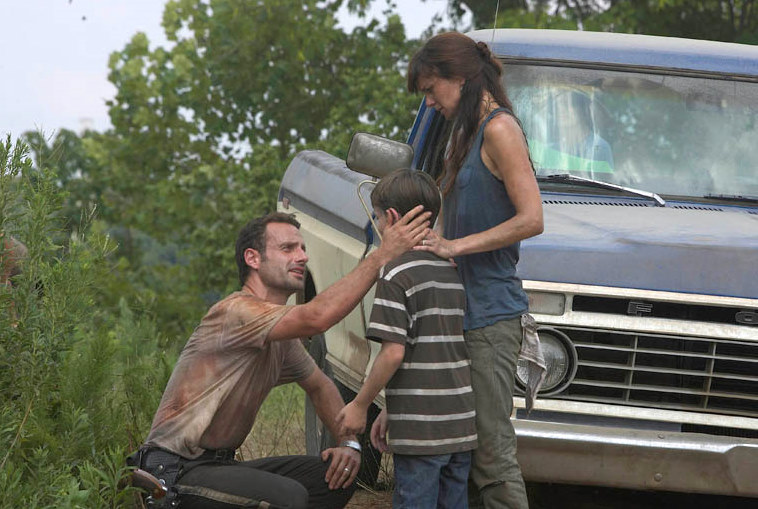 Between Rick and Shane there is a problem and her name is Lori. Shane uses her to try to flip Rick on his plan to head to the CDC. Rick uses her to alleviate his doubt and validated his self-esteem. Lori plays Rick against Shane in order to get him to stop dogging on her for some lovin' and uses Rick in order raise her status in the group (this is based on the idea that Lori knows that Rick is a more powerful leader than Shane and will win over the group.) The fate of the group is depends on the outcomes of this tense love triangle.

Why does Rick or Shane's perspective matter to the group? On the one hand, both men are police officers, therefore predisposed to leadership (or crowd control), but on the other the symbolic system that allows them a place of power in the world ceased to exist? Thinking back to episode 2 of this season, Rick even makes the point to Andrea that he is not a police officer due to the end of the world. 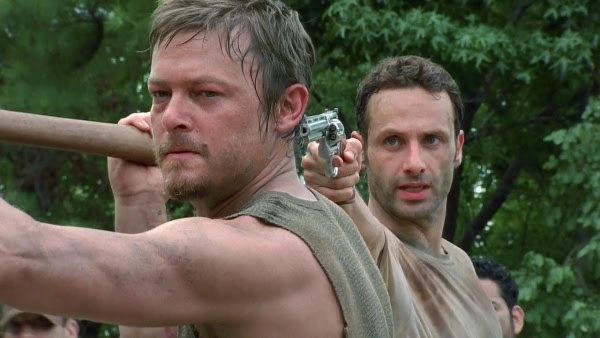 Why does Rick still wear his uniform? I'd argue that is a kind of inverted interpellation. Or ideology from the back end of production. Althusser argues that we are always-already in ideology, and interpellation is that moment where we intentionally or unintentionally enter into the matrix of an ideology. The common example of interpellation is a scenario when some punk is walking down the street, and from behind he hears someone say, “hey you!” The punk turns around and realizes that the shout came from a cop. In this instant the punk finds herself as a subject integrated into an executive and legislative networks of power. Althusser is not saying that these networks of symbolism just poof into existence when some punk is 'called' by a cop. The argument goes that we are always-already integrated into several sets of meaning, and when we are called into one system of meaning more significantly than another we become what we are for others. 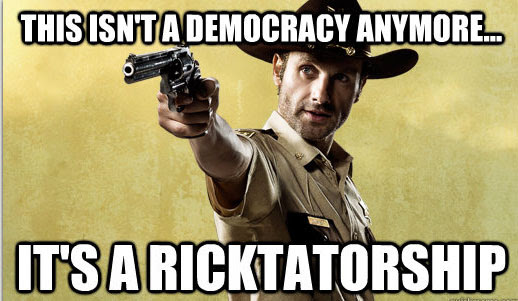 Where is ideology at the end of the world? It's radically localized. Small groups form their own systems of identification. Peter Drucker used the phrase 'Knowledge Worker' to describe those individuals in a system that constitute and regulate knowledge for others in simple and complex system. A knowledge worker primarily deals in slinging social capital, and getting others to buy into it and perpetuate it. Systems are not just interested in maintaining their position, but are also interested in reproducing their hold on a position. So, while Rick may not be bought into the idea that he is a police officer, he has bought into the idea that the group should treat him as if he is one. The goofy meme shoots the zombie in the face. Rick uses his cultural capital to maintain the executive role of his former title. But without the complex systems that legalize his role in a community he has to recreate those systems within the group of survivors. This is why he seeks both Lori and Shane's blessings on his plan to move the group towards the CDC. Rick is in the process of a coup d'etat. Lori and Shane are the two main native leaders of the survivor group, and when he moves both leaders to his plan he has demonstrated his desire to usurp their roles.