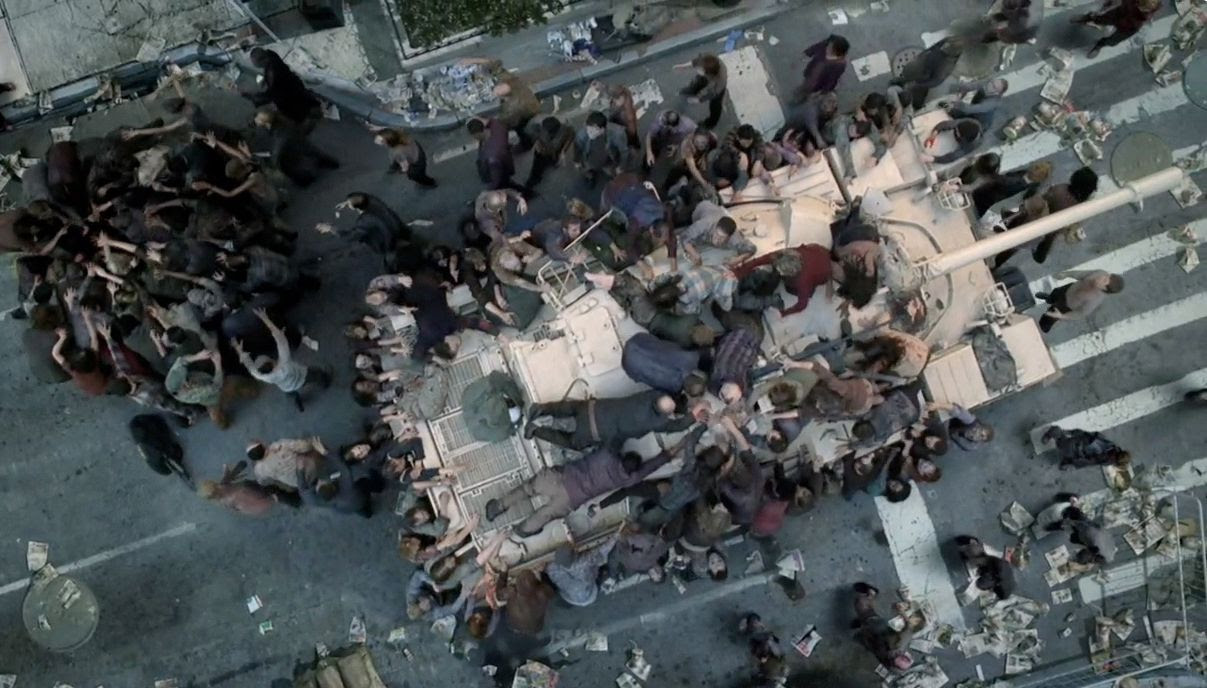 Welcome to our journey into the guts of The Walking Dead. What kind of journey? A philosophical, psychoanalytical and political kind. What I would like to do over the next couple months is dig thought the Walking Dead episode by episode to see what it can teach us. Thank you for following me on this journey. I look forward to reading your comments. Be forewarned: There are spoilers everywhere. Don’t forget to check out my previous article in the Philosophizing TWD series: Philosophizing The Walking Dead S1E3 Tell It To The Frogs And The Failure Of Advocacy

We enter Vatos following two groups. Rick is leading a group to recover Merle and the base camp is dealing with Jim's psychotic break. Jim is freaking out and digging graves at the top of a hill. I had a difficult time with this episode. Bear with me, I get to zombies by the end.

A couple weeks ago I finished a college on Leadership and Organization Development. For the final project we presented on business disrupters. My group presentation focused on the G8/Nato protest. In business disruptors are products that arrive on the market that toss a monkey wrench which forces a business to adapt or die. For example, when the iPhone launched in 2007, not only was the iPhone a new phone. But the phone included a new mode of production. The iPhone forced a mcdonalization-like process to take place in the phone market. To compete with other companies had to develop smart with a similar market chain. McDonald's introduced not just the chicken nugget, but a business model that forced competing businesses to conform to the McDonald's strategy in order to survive. Like Mcdonald's and apple representative democracy and policing is changing due to Occupy's disruption. Cops invest in riot gear and practice new crowd dispersion tactics. Cities create and change laws to counteract occupation.

So, what is a disruption in the context of the street politics of occupy? That is the question I sought to answer in my subsection of the presentation. I began by asking if anyone had participated in a March. My question was met by glazed over expressions (the class was mostly jocks and white collar workers). The professor raised his hand and said he marched with the tea party. I chuckled and said that today I'd like to speak the G8/Nato summit March and protest.

One of the difficulties I had with trying to find the agenda for the event online. The website that was hosting the agenda does not exist anymore. Let me try to reconstruct the story for you out of my experiences with other Occupy marches I have participated with in Chicago. Early in the morning people begin to Chicago. Some come from out of state. Some from out of the country. A majority of the protesters was coming from local or suburbs. The march started at the Daley center to march to the McCormick center. Leading up to the start of the march people lined up by groups and factions. The Anarchist in black with masks and hoodies. The communists in red. Immigrant rights group might be carrying a Mexican flag. Occupy organizers are moving through the crowd handing out picket signs and engaging people in chants. The atmosphere is festive yet tense.


In the weeks leading up to G8 moved their event to Camp David out of fear of democracy. Homeland Security sent in agents into infiltrate various organizations and arrest key organizers without giving the city of Chicago notice. The Red Cross drew up plans to evacuate the city. The coast guard mobilized ships into lake Michigan. The Chicago police spent millions on riot gear. Business gave notice to their employees to stay home. The week before Occupy held a 2 day summit covering various topics seeking to educate and prepare leaders for the march and protest. 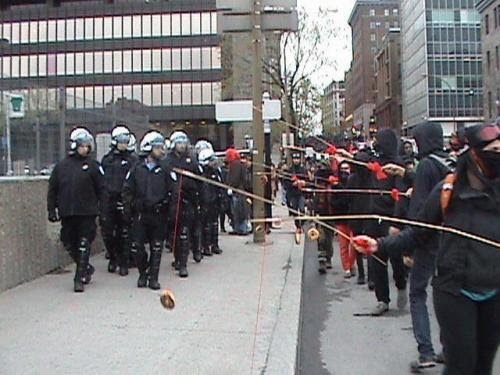 Eventually forming into a single contingency the march started. Commies were banging on bucket drums. Anarchist walked with donuts rigged on handmade fishing poles hoping to catch a hungry police officer. Overhead Chicago police helicopters dotted a line along the march route. Police lined intersections blocking traffic. Some cops followed on bikes from the sidewalks eyeing protesters. When the contingency arrived at McCormick Center they ran through their agenda. Veterans throwing tossed medals and gave speeches.

When the event ended the main Occupy Chicago contingency left and people from out of state stayed behind. The news covered a scene with cops lined up 4 pigs deep and slowly pushing the protesters back inch by inch. When front line police showed signs of stress, commanders behind the lines would pull them back to recuperate. Occupy medics pulled injured protesters to the sidewalks and conducted first aid. Protesters used their phones to take photos and videos but couldn't upload them to the web because the city of Chicago was using cell phone jammers. As I was talking to the room, I drew up the battle lines reminiscent of a football strategy. X and O's and plenty of errors. 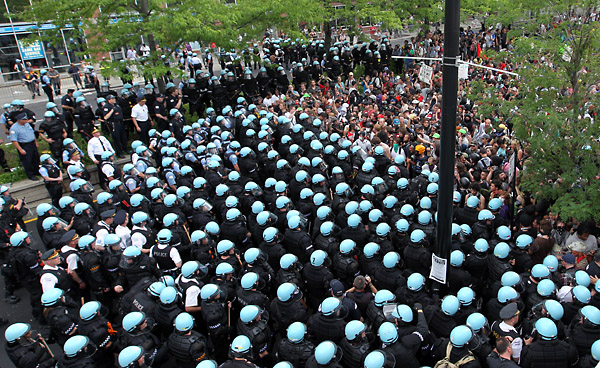 So what does this have to do with The Walking Dead? One of the ongoing struggles in The Walking Dead is the dialectic between what Mao Zedong called the War of Position and the War of Maneuver. Do we stay or do we go? Should we be mobile, or should we set up shop and call this prison or farm a home? Like the Survivors in The Walking Dead the Post-Arab spring organizations are caught in the same problem. Unlike Tahrir Square in Egypt the steps street outside of the McCormick center does not hold any relevant political significance. What was the point in the protesters' death grip on that strip of street, when they could have moved the crowd to another location that has more significance? What was the point of the survivors holding a camping spot outside an Atlanta, Georgia and its giant pile of zombies?